10 Cancer Signs Women Should Not Ignore 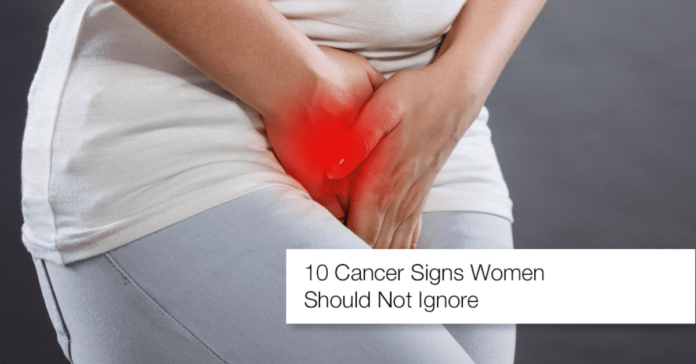 “Do I have cancer?” Or rather “Am I susceptible to cancer?” is the question that haunts most of us in our lives. Well, it’s not that simple, but it’s also not that difficult to understand the ‘know-hows’ of it. Cancer is something that’s feared by all, but can be conquered if detected early . Sometimes, cancer turns out to be something that’s completely out of our control and with factors like genetics, age and gender; there are many things which could elevate our cancer risk. However, the ultimate goal is to educate people, from nine to ninety, to recognize cancer in its early stages. When it comes to cancer, time counts, and actually ends up saving your life. So, this article isn’t essentially about how to ‘prevent cancer’ but about identifying it and seeking medical help at the right moment.

What are the most common types of cancer prevalent in women?

Well, it’s October, which is the Breast Cancer month, but that’s not the only type of cancer women need to worry about. Some of the cancers which are most commonly detected in women are breast, lung, colorectal, cervical, endometrial, skin and ovarian cancers. And each of these cancers brings certain changes in your body. So, the key to detecting cancer in its early stages and consequently saving your own life is to pay attention to every detail, notice and inspect whenever something new or different happens to your body.

Cancer signs that women need to be on the watch for:

Not all cancer reflects pink and while you may be on the lookout for lumps and bumps on your breasts, there are certainly more important, yet commonly ignored symptoms that women should recognize. So, even though most of these following cancer symptoms could also denote harmless medical conditions as well, you need to be on the lookout for persistent signs and contact a professional for that necessary dose of certified assurance.

As most women already know or have experienced, abnormal periods isn’t uncommon. There may be many reasons which could impact your menstrual cycle such as pregnancy, obesity, ovarian cysts, thyroid extremities, menopause and even stress. But, if you start to have prolonged and significant changes such as post-menopausal bleeding and even pelvic pain, you should definitely consider visiting a doctor. If you have ongoing abdominal pain you need to see a doctor because, ovarian, cervical, endometrial and other types of cancers may cause persistent abdominal pain as well.

Seeing blood getting discharged with your stools could be real scary, but generally the blame goes to constipation or hemorrhoids. Though 75% of men and women are bound to suffer from blood in the stools at some point of time, it should never be left unchecked. Bloody bowels are never normal and could lead up to colon cancer. Similarly, dark, bloody and smelly vaginal discharge is a warning sign for cervical, endometrial or vaginal cancer.

Most women tend to overlook weight loss as they consider it to be a good change. But in reality, it’s actually a concerning one and one should consult a doctor for both weight gain and loss. Unusual and unexpected changes in both weight and appetite could turn out to be a symptom. Leukemia, pancreatic, liver, esophageal, and colon cancer are all capable of causing symptoms like a sudden weight gain/loss without any change in your diet or exercise regime.

Most women who are cautious about breast cancer are well aware of symptoms like breast lumps and bumps. But, what they don’t know or are unaware about, is the lesser known symptoms like breast dimpling. There are other breast cancer signs like the discoloration of skin, swelling, and even nipple inversion. So, you should always get it checked if you witness even the slightest of changes in this part of your body.

Everyone gets sick every now and then, and it could be anything from common cold to allergies to the flu or something even serious. We generally tend to overlook such things and just go for a paracetamol or some cough syrup. But, if you are suffering from a cough that has lasted you for more than two weeks, it’s time to take things seriously. Coughing up blood is also a red flag for lung cancer or leukemia.

If you are experiencing difficulty in swallowing and if you have been blaming it on a sore throat for days on end, you might want to get it checked. Persistent symptoms could point towards throat, stomach, lung and even thyroid cancer. Don’t ignore such ‘seemingly

harmless’ symptoms for too long and dial your doctor’s office for an appointment as soon as possible.

We all know our ABCDs by heart, but do you know the ABCDE’s of ‘Melanoma’ or skin cancer? This gives you about a better idea about which spot on the skin to notice and which to ignore. Look out for A-Asymmetry: If you draw a line through the middle of the lesion, the two halves don’t match, so it looks different from a round to oval and symmetrical common mole. B – Border: abnormal or blurry edges, C- inconsistent Color changes in the skin, D- spots having a Diameter bigger than 6 mm and lastly E- any mole that Evolutions or changes with time.

Also Read About: Squamous Cell Carcinoma of The Skin

Stomach upsets and nausea are such general symptoms that it’s almost wrong to claim that they could lead up to cancer. However, if you are facing stomach cramps or a nauseous feeling which has stayed with you for more than two weeks, it’s time to hit the doctor’s chamber as these are potential signs of esophageal, stomach, pancreatic, colorectal and liver cancer.

Bloating after a sumptuous, filling lunch or during your period days is absolutely normal, but bloating on a daily basis is definitely not. A constant bloating feeling could be a sign of ovarian or uterine cancer. So, simply ask your doctor to take a closer look.

This is probably one of the most commonly experienced and ignored symptoms. But, to be honest, if you have never had migraines, then a sudden onset of painful headaches needs to be taken seriously. It could very well lead to brain cancer or lymphoma and should be thoroughly discussed with your doctor.

So, the moral of the story is that any symptom, no matter how big or small should be taken seriously, as it could denote cancer or something equally serious. You need to follow the 2-

week rule and if any change in your health lasts for that time period, it’s time to consult a doctor. Remember, when it comes to detecting cancer, the best person to come to your rescue is yourself.