3D Mammogram or Tomosynthesis – Everything You Need to Know 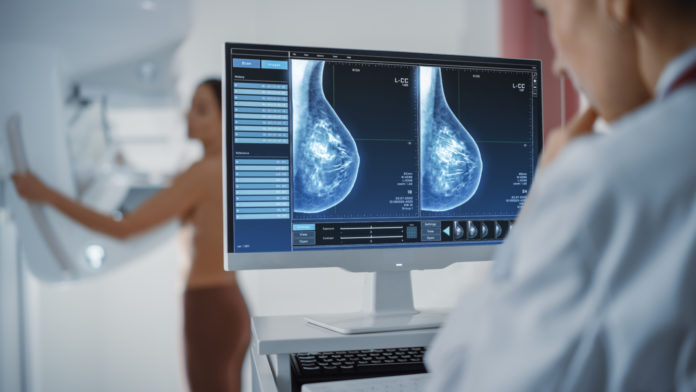 Tomosynthesis, often known as a 3D mammogram, is a novel type of digital x-ray mammogram that produces 2D and 3D images of the breasts. This technique increases mammography’s ability to detect early breast cancers and reduces the proportion of women who are “called back” for extra tests for non-cancer findings.

Breast cancer is the second most common cancer and tops the list of cancers in women. The world witnessed over 2 million new cases of breast cancer in 2018. In India, there were 1,62,468 new cases and 87,090 deaths in 2018 due to breast cancer.  As the disease progresses to an advanced stage, the chances of survival decline. More than half of all Indian women with breast cancer are in stage 3 or 4.

The 3D Mammogram provides both 3D and standard 2D images. The combination of both these images provides detailed insights. Studies suggest that most cancer cases are detected during screening with this advanced technique. Although there is an increasing trend of prescribing 3D mammograms, not many hospitals in India have this facility.

When do doctors recommend a 3D mammogram?

3D mammography is a breast cancer screening technique that looks for the illness in those who have no signs or symptoms. It can also be utilized to look at issues like a suspicious lump or thickening in the breast.

The 3D mammography machine creates both 3D and traditional 2D mammogram images when used for breast cancer screening since both types of images have advantages in detecting specific breast abnormalities.

What are the common uses of the procedure?

Mammography is crucial in the early identification of breast cancer since it can detect abnormalities in the breast years before a patient or physician notices them. Mammography screening is currently advised every year for women starting at the age of 40. Annual mammograms have been demonstrated to lead to early discovery of breast cancers when they are most curable and breast-conservation medicines are accessible, according to research.

You should book an appointment with your doctor if:

What are the risk factors associated with 3D mammogram?

There are certain risk factors associated with a 3D mammogram. Some of them are:

How should one prepare for 3D Mammogram?

What are the pros and cons of 3D mammogram?

The following are some of the other advantages of employing tomosynthesis in addition to or instead of a standard mammogram:

The following are some other potential dangers of adopting tomosynthesis instead of standard mammography:

How is the procedure performed?

When you arrive, you’ll be led to a changing room where you’ll be asked to remove your clothes up to your waist and given a gown or cape to wear.

After that, you’ll be transferred to the same machine (or a machine similar to it) that does a standard mammography. The technician will place one breast in the X-ray region at a time. As with a standard 2-D mammography, your breasts will be squeezed tightly. Over your breast, the X-ray tube will be placed.

The X-ray tube will move in an arc across your breast during the process. During the procedure, 11 photos of your breast will be captured in 7 seconds. After that, you’ll switch positions so that photos of your other breast can be taken. Your photos will be uploaded to a computer, which will create a 3-D image of both breasts after the surgery is completed. A radiologist will interpret the data from the final imaging.

What to expect from a 3D mammogram?

The radiologist may ask you to remove any jewelry from your neck. The technician advises you to stand in front of the mammogram machine and adjust the plates to a suitable height. You will be asked to stand in a manner that provides a clear view of your breast. The plastic plate of the mammogram machine creates pressure on your breast. It allows a full view of the breast tissue. You may feel a little pain and some discomfort during the procedure.

The mammogram machine takes the images of your breast from various angles. The radiologist may also recommend you to hold your breath to avoid minimum interference. The technician then repeats the procedure for the other breast.

What are the results of 3D mammogram?

The machine creates a 3D mammogram of the breasts by combining all the images. The radiologist may analyze it in parts or as a whole. The machine also forms a 2D standard mammogram. If the radiologist finds abnormalities in a 3D mammogram, he may analyze the 2D standard Mammogram or compare it with the previous images. The radiologist may advise you to undergo additional tests if he is still unsure about the abnormality. The tests may include an MRI, an ultrasound, and a biopsy.

What are the next steps involved in this procedure?

You can resume your normal activities and diet when the operation is completed. You may hear from the doctor the same day if your findings are normal and indicate no symptoms of malignancy. If your results indicate that you may have cancer, you may require additional testing and follow-up. The time it takes to get a result varies depending on the facility. If the results are inconclusive, your doctor may schedule more testing, such as an MRI or an ultrasound. The results of one of those tests could take up to a week to arrive. Tomosynthesis, on the other hand, has the advantage of lowering callback rates.

A 3D mammogram is a modern imaging technique that can detect breast cancer in its early stages. It has screening, diagnostic, and therapeutic applications. It is better than standard 2D mammograms in terms of safety and accuracy. The risks of 3D mammograms include false tumor detection, failure to detect a tumor, and radiation exposure.

Would I feel any pain while undergoing a 3D mammogram?

During a mammogram, the plates squeeze your breasts. It may cause a little discomfort. However, squeezing is necessary to minimize radiation exposure. The extent of pain and discomfort also depends on the radiologist performing the procedure.

How much time does it take to complete a mammogram?

The time required to complete 3D mammograms can vary from patient to patient. A standard mammogram takes around 10-15 minutes. However, it may take about 30 minutes to obtain clear images if you have a breast implant.

What is the difference between a 2D mammogram and a 3D mammogram?

Is a 3D mammogram better than a regular mammogram?

Does insurance pay for 3D mammogram?

Yes, but there are some exceptions. Mammograms that are three-dimensional (3D) can be utilized for routine screening mammography. They’re becoming more popular, and most insurance companies, including Medicare and Medicaid, cover them.

What Does Fasting Blood Sugar Test Tell You?