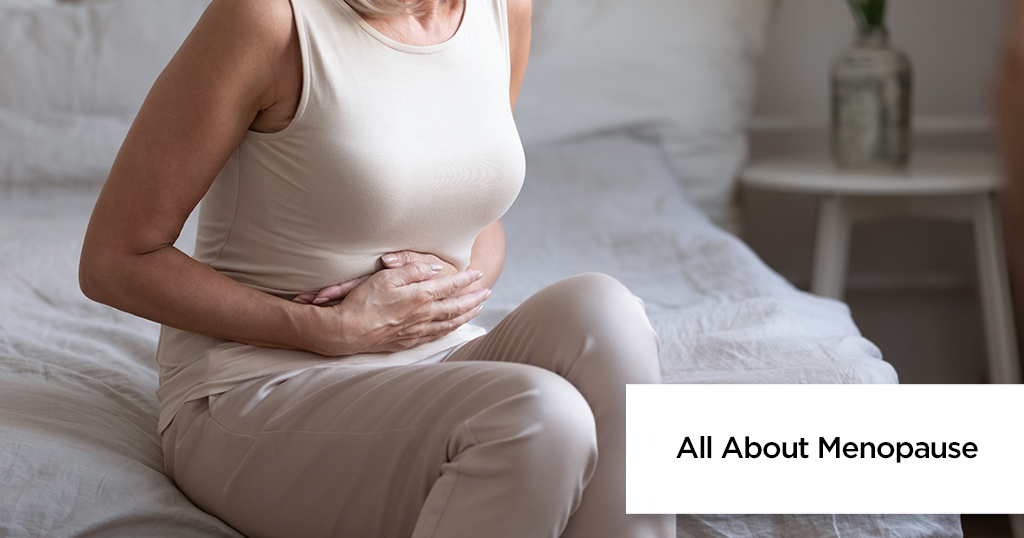 Menopause refers to the period when a woman loses her ability to conceive, as there is a permanent ending of menstruation. It generally occurs between 45 to 55 years of age. It can be a natural cessation or artificial — when a woman gets her ovaries surgically removed – this is called bilateral oophorectomy.

For women undergoing natural menopause, the process is described in 3 stages: perimenopause, menopause and post-menopause. Menopause is said to occur when a woman has not had any periods for a year.

Why does menopause happen?

As a woman approaches her late 30s or 40s, the quality of eggs produced by the ovaries tends to deteriorate, and finally stop. When it stops, a woman’s periods or menses become irregular and cease. This is because the inner lining of the uterus, which prepares for the fertilised egg to implant itself becomes redundant. It is this lining that comes out during a woman’s period when pregnancy does not occur.

As the ovaries stop producing eggs, the hormones that it secretes, namely oestrogen and progesterone also decrease. These hormonal changes are responsible for most menopausal symptoms like hot flashes, irritability and disrupted sleep.

Perimenopause is the first stage of natural menopause. It refers to the rime period when a woman’s body shifts from regular menstruation/ovulatory cycles to a permanent cessation of menstruation and ovulation (infertility). It is also called as menopausal transition.

It usually occurs in the fourth decade of a woman’s life but may begin as early as late thirties. When a woman goes through a year without having had a period she has reached menopause and the perimenopausal period is over.

This stage is characterized by changes in the menstrual cycle, vaginal dryness, mood disturbances and sleep problems among others.

Listed below are the typical symptoms of menopause.

The symptoms of menopause vary from woman to woman. Menopause is a biological phenomenon, and some women sail through it smoothly while for others, they are turbulent times.

How is menopause diagnosed?

To check if you are experiencing menopause, your doctor may ask you to get a blood test that checks your follicle stimulating hormone (FSH) level. FSH is a hormone produced by pituitary gland, which is located at the base of our brain.

For many women, this blood test is not required. If you or a loved ones are having the symptoms of menopause and the periods have been irregular, see your doctor. Your physician will be able to diagnose menopause after a conversation with you.

A new US FDA (Food and Drug Administration) approved blood test, called PicoAMH Elisa diagnostic test is being used to help determine whether a woman entered menopause or is on the verge of entering menopause. This test can be helpful to women showing symptoms of perimenopause, which can also lead to adverse health impacts.

Other commonly used blood tests to confirm menopause include:

The length of menopause could be for a few months or as long as five years. In induced menopause (due to the removal of the uterus – hysterectomy or chemotherapy or radiation of ovaries in case of ovarian cancer) menopause occurs more abruptly and the symptoms are said to be more severe.

If you are in the age bracket of 45-55 years and have skipped a period make sure to check if you are pregnant. It is easy to attribute some pregnancy symptoms to menopause.