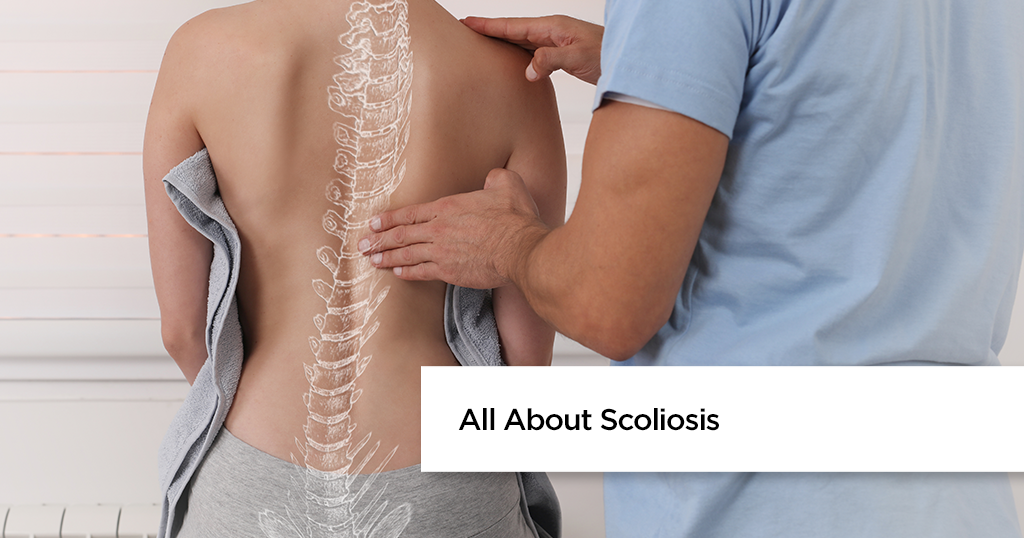 An abnormal curve in the spine is called Scoliosis. While many patients have no known cause, there are many types of scoliosis, based on the age, the cause and when the curve develops. The most common symptom of scoliosis is curvature of the spine. Risk factors for scoliosis include age, sex as well as family history.

The term Scoliosis is used to describe an abnormal curvature of the spine. The spine is a stack of small bones called vertebrae which are supported by cartilage pads between each vertebra. Normally, when viewed from the front, the spine is straight and when looked from the side, has 2 gentle S-curves. In scoliosis, the spine, when viewed front, curves to the side and the vertebrae also twist on the adjoining vertebra as in a corkscrew fashion.

While the cause of Scoliosis in majority of cases (about 70% per cent) is not known and termed as idiopathic, the rest of the cases can be due to structural spinal problems such as birth defects, muscular dystrophy, connective tissue disorders (Marfans Syndrome) and also due to functional causes (normal spine) due to compensation occurring because of some other deformity such as a shortened leg.

Risk factors for scoliosis include:

Appearance can be altered as a result of scoliosis. The head may be off-center, one hip or shoulder may appear higher than the other, walking may be rolling in nature, or asymmetry may be obvious. Breathing and circulation problems may also be present if scoliosis is severe and involves the bones covering the heart and lung areas.

If a curvature due to scoliosis gets worse, the spine, apart from to curving side to side, will also twist or rotate. This may result in the ribs on one side of the body to stick out farther than on the other side.

Looking at the patients’ back and spine is usually sufficient to diagnose scoliosis. A toe-touching movement by the patient will also highlight a bent spine. X-rays can confirm the diagnosis and measure the degree of curvature.

Majority of the cases of scoliosis do not require treatment. For patients with less than 250 degree curve, no treatment is required. If the curve is between 250 degrees and 300 degrees a back brace can be used for treatment. The child may be re-examined every four to six months as follow-up. Surgical correction needs to be considered for curves more than 450 degrees, especially if more growth is expected as per patients age. Surgical correction involves fusing vertebra together and may also require rod insertions next to the spine.

The goal of scoliosis surgery is to achieve a well-balanced spine in which the patient’s head, shoulders and trunk are centred correctly over the pelvis. Instrumentation to reduce the magnitude of the deformity and fusion to prevent future curve progression are the steps involved.

Use of staples on the convex side of the curve, to correct and maintain the curve till the patient is skeletally mature, is a recent development in the treatment of Scoliosis. These staples allow differential growth to take place, i.e. less growing speed on the stapled side than the concave side, thereby correcting the curve as the child grows.

Nitinol is a titanium based alloy. Spinal implants made from Nitinol are also now being used. The C shaped staples are in the shape of ‘C’ when they are manufactured at room temperature. When the staples are cooled to below freezing point the prongs become straight but clamp down into the bone in a ‘C’ shape when the staple returns to body temperature providing secure fixation. These are called Shape Memory Alloy (SMA) staples. As no fusion is done the child grows normally and even the residual deformity tends to improve with growth.

This novel procedure was performed for the first time in India at Apollo Hospitals on a 6-yr old girl, from a small town near Madurai.

It is not possible to prevent scoliosis. Early screening and detection in school, at around the age of 10 is a good way to make sure cases are picked up early for treatment. The underlying cause of scoliosis, if any, needs to be addressed in those rare cases.

Baby Crowning: What is, When Happen, What To Do and Preparation Tips

Baby Crowning: What is, When Happen, What To Do and Preparation Tips