All You Need to Know About Adenomyosis: Symptoms, Causes, and Treatments 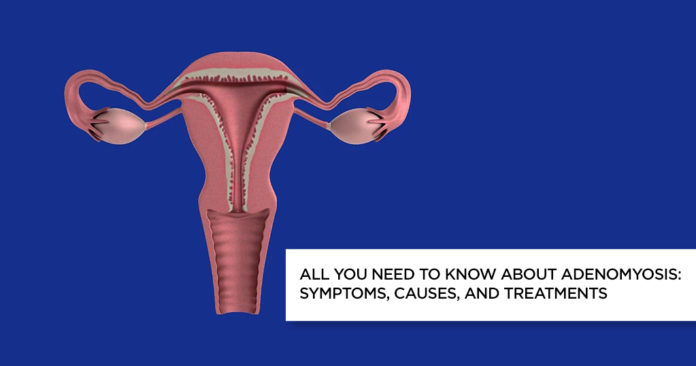 Adenomyosis is a medical condition where the inner tissue lining the uterus, also known as endometrium, starts to grow into the muscular wall of uterus. The causes of adenomyosis are not known yet, but the condition usually resolves on its own after menopause. It often develops in middle-aged women.The displaced tissue continues acting normally (thickening, breaking down as well as bleeding) during each menstrual cycle. This can result in an enlarged uterus and painful, heavy periods.

It can cause lower abdominal pain, severe menstrual cramps, and bloating before periods. You may experience heavy menstrual flow as well due to adenomyosis.

Adenomyosis can affect the whole uterus or just occur in one spot. Adenomyosis is considered to be benign, i.e., not life-threatening. But, the constant pain and discomfort can affect the quality of a woman’s life.

Adenomyosis is common in women of middle age and other related factors are previous childbirths and uterine surgery previously at some point in their lives like fibroid removal and C-section during childbirth .

What Causes of Adenomyosis?

The exact causes of adenomyosis are not known yet. But some of the theories suggest:

There might be a link between childbirth and adenomyosis. During the postpartum period, the inflammation of the lining in the uterus might break the normal boundary of the cells of the uterus, causing adenomyosis.

When the uterus is formed in the foetus, the endometrial tissue gets deposited in the uterine lining, causing the development of adenomyosis later in life.

What are the Symptoms of Adenomyosis?

Chronic anaemia is one of the complications of adenomyosis. It is developed after having prolonged, heavy bleeding during menstruation. If left untreated, it can lead to fatigue and several other health problems.

The risk factors for adenomyosis include:

Most of the cases of adenomyosis depend on the estrogen level in the body. It is commonly found in women in the age group 40-50 years. Longer exposure to estrogen as compared to young women might be the cause. A few recent studies show that it might be common in younger women as well.

Your doctor may suspect adenomyosis based on:

● A pelvic exam that reveals an enlarged, tender uterus

● Ultrasound imaging of the uterus

The treatment options rely on many factors, including symptoms and severity of the condition. Mild symptoms are often treated with medication

Since adenomyosis often resolves itself after menopause, the doctor might suggest a treatment plan depending on your age.

Treatment for adenomyosis include:

Hormone therapies help treat symptoms like heavy and painful periods. A levonorgestrel-releasing IUD (Intrauterine Device) is inserted into your uterus to help relieve the condition.

To relieve mild pain associated with uterine adenomyosis, nonsteroidal anti-inflammatory drugs such as ibuprofen are prescribed by the doctor. The medicine is started two to three days before your period starts and is to be taken till the end of your period cycle. It helps reduce menstrual flow and relieves pain.

This is a procedure, commonly used to help shrink fibroids in the uterus. The procedure prevents some arteries from supplying blood to the affected area. As the blood supply is cut off, the adenomyosis shrinks

In some patients where the adenomyosis has not penetrated deeply into the muscle wall, this procedure is quite useful. It destroys the endometrial wall of the adenomyosis-affected uterus.

In severe cases, the doctor might recommend hysterectomy – removal of the adenomyosis-affected uterus . The removal of ovaries may not be necessary to control adenomyosis.

● What causes adenomyosis to flare up?

Theories suggest it might be due to previous uterine surgeries, or age among several other causes. Longer exposure to estrogen as compared to young women might be the cause

Book an Appointment With our Gynecologist

The content is verified by our experienced Gynecologists who also regularly review the content to help ensure that the information you receive is accurate, evidence based and reliable

Treatment options for Infertility in Women