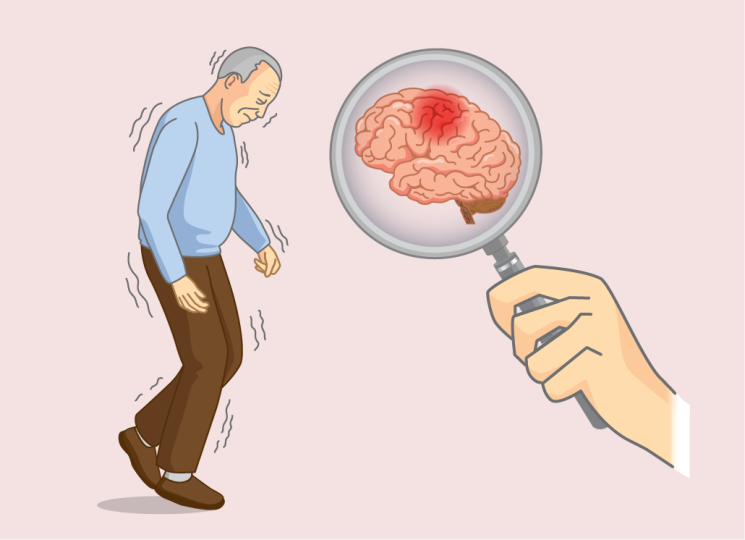 Alzheimer’s disease (AD) is an aging-related neurodegenerative disorder and is one of the most common causes of dementia in older age group people. Dementia is a clinical condition characterized by a steady loss of mental function. The number of people suffering from AD has been rising exponentially in recent years. This poses a potential burden on quality of life and finance. Most of the people who have Alzheimer’s are around 70-80 years old. There is no specific gender predilection noted. In the U.S., 1 out of every 9 individuals above the age of 65 years has Alzheimer’s disease. Globally, around 35 million people are living with dementia. Dr. Alois Alzheimer first described Alzheimer’s disease (AD).

There are multiple risk factors and causes for Alzheimer’s, with age as the most significant risk factor. Genetics and familial tendency play a substantial role in developing AD. With increasing age, the risk of developing Alzheimer’s disease also increases exponentially.

Alzheimer’s disease can be categorized into early onset (<60-65 years old) and late onset (>60-65 years) forms. A late-onset Alzheimer’s disease has a more genetic influence, and about two-thirds of the cases have a familial tendency (heritable). Most of the early onset cases usually do not have a positive family history. Lifestyle and environmental factors also play a considerable role in developing AD.

There are many management options to influence patients with AD positively. However, there is no complete cure yet. Therapies targeting lifestyle and general brain health can help in leading a decently good life. However, it is important to identify changes associated with AD at an early stage and seek proper medical advice and care.

Alzheimer’s is a multi-factorial disease affecting the function of the brain. AD results due to abnormal deposition of amyloid material (protein) in the brain cells leading to their degeneration and death. Genetics and familial tendency also play an important role.

Though the exact etiology is unknown, Alzheimer’s is known to be caused by both genetic and non-genetic factors.

Symptoms of AD are usually progressive and worsen as the disease progresses. The symptoms are usually related to cognitive abilities, however, non-cognitive symptoms such as motor and behavioral abnormalities are also noted. It usually starts with a mild decline in the memory, ability to do daily activities, and forgetfulness in executive function. The symptoms and the rate of progression may vary from person to person.

Based on clinical symptoms and chronicity, AD is categorized into three phases. They are ‘forgetfulness phase,’ ‘confusional phase,’ and ‘dementia phase.’

Most of the AD cases present with a pre-clinical phase where the pathological changes start, but the patients would not manifest any symptoms. After an extended pre-clinical period, cognitive symptoms begin to show. Initially, the short-term memory will be affected. Later visuoconstructional changes might be observed. To a lesser degree, implicit memory, headache, working memory, and long-term declarative memory are affected. At early stages, patients with AD may find it difficult in handling complicated tasks, planning, and organizational skills, problem-solving capacities, judgment, etc. They may need assistance in performing financial transaction and house chores.

The initial stage of AD is ‘forgetfulness phase’. Short-term memory loss in AD patients can be identified by things like frequently misplacing things, repetition of statements or questions, forgetting names of familiar persons. They may find difficulty in orienting to time and reaching destinations. They may lose the capability of estimating speed and time, making driving a difficulty for them. In an early AD, language impairment symptoms include decreased verbal fluency, difficulty in finding words, hesitant to speak, etc. Slight behavioral changes like depression are seen in some cases.

Patients in these stages show severe functional impairment and diminished cognitive abilities. This stage is also referred to ‘confusional phase.’ As stage progresses, they show increased dependence on others to perform daily activities. Except for few cases with moderate AD, patients at these stages find it challenging to engage themselves in community affairs. They tend to forget newly learned things, very fast. However, old memories remain largely unaffected. Patients exhibit disorientation. Moderate AD patients can still perform simple household tasks, but they require assistance while performing complicated tasks. Patients also show the behavior of denial. They also show loss of interest in surroundings and news.

In advanced cases, patients become entirely dependent on nursing care. Even simple motor skills like chewing and swallowing may be impaired. Speech is reduced to simple words and phrases. Paranoia, delusion, and insomnia are also seen in severe cases. Emotional changes are seen commonly. Motor rigidity can be seen in the final stages.  Patients with end-stage AD are usually bedridden and die of complications like infection, aspiration, etc.

Apart from familial or heritable factors, specific environmental factors also pose a risk of Alzheimer’s. They include:

Identifying the risk factors and modifying them promptly can help in preventing the development of AD.

The diagnosis of AD in clinical settings is usually based on

A thorough history including family history has to be taken. Clinical evaluation related to symptoms and signs has to be performed. Clinical diagnosis of AD uses specific criteria and logical sequence.

International Work Group has given certain criteria for the diagnosis of AD. These criteria include:

The treatments available currently for Alzheimer’s disease are symptomatic. Remember that till date, there is no known cure for Alzheimer’s. The medication available is usually helpful in reducing certain neuropsychiatric symptoms and enhance or preserve cognitive abilities and help patients suffer less. Management of AD includes both pharmacological and non-pharmacological methods. Behavioral management is an important aspect in the treatment of AD.

Cholinesterase inhibitors are commonly used as AD exhibits significant cholinergic deficits in imaging as well as neuropathological studies. In mild to moderate cases of AD, cholinesterase inhibitors like Donepezil, Rivastigmine, Galantamine, etc., are used and are proven to be effective in cognitive functioning improvement. These medications are well-tolerated and considered safe, though they have certain side effects like nausea, vomiting, and diarrhea. Rivastigmine is an approved drug of choice for symptomatic treatment in mild to moderate AD. Rivastigmine transdermal patch is also proven to be efficacious in AD patients. Remember, cholinesterase inhibitors can only slow the progression but cannot stop or reverse AD.

Donepezil is another effective treatment option in managing cognitive impairment in patients with mild to moderate AD.  However, higher doses showed certain adverse effects like diarrhea, muscle cramps, nausea, and vomiting. Lower doses (5mg/day) were proven to be well-tolerated than higher doses (10mg/day).

Galantamine is one of the commonly used drugs in AD patients. It has shown a significant effect on cognitive functioning in patients with AD. Also, the side effects were minimal and mild, which included gastrointestinal symptoms.

Anti-inflammatory agents (NSAIDs and corticosteroids) are also studied but didn’t show any improvement in the condition. Hence they are rarely used nowadays.

Antioxidants are also used in the treatment of AD, as it is suggested that certain free radicals that are neurotoxic are generated during oxidative metabolism and result in neurodegeneration. Vitamin E and selegiline were shown to be effective in delaying disease progression.

Postmenopausal estrogen replacement therapy was also found to be effective in minimizing the risk of AD development in women. However, further research in the same is advocated.

Alternative medicines like leaf extract of Ginkgo biloba was also tried for their anti-inflammatory and anti-oxidant properties.

Intravenous immunoglobulins (IVIg) use is under research, and these immunotherapeutic approaches are currently used in various immune-mediated neurodegenerative disorders. Anti-amyloid immunotherapy is another option. Anti-tau immunotherapy is still under study.

Apart from drugs, behavioral management also plays a vital role in the management of AD. These methods may not be effective in managing memory loss but can support mild dementia. Memory retraining techniques can be aimed at mild dementia. Approaches like aromatherapy, music/dance, bright light therapy, multisensory stimulation, and pet therapy can help in managing neuropsychiatric symptoms like agitation. Deep brain stimulation can be used to support brain activity.

As discussed, there is no proper cure yet for AD. Hence it is essential to take all possible measures to prevent the development of AD. Prevention can be defined in three levels, primary, secondary and tertiary prevention.

Primary prevention strategies focus on minimizing the incidence of AD by encouraging the maintenance of good health and lifestyle habits thus excluding potential risk factors for the disease. Secondary Prevention adopts methods to prevent the progression of AD right at the preclinical or very early stage to more aggressive phases. Tertiary prevention focuses on enhancing the quality of life after the patient manifests the disease.

Modifiable risk factors such as smoking, alcohol consumption have to be controlled to prevent the development of AD. Well-controlled type 2 diabetes mellitus, hypertension, and hyperlipidemia can help in preventing the occurrence and progression of the disease.

What is Alzheimer’s disease?

How to identify Alzheimer’s disease at an early stage?

Patients with AD, at an early stage, show memory problems. Difficulty in finding words, the decline in logical reasoning, certain vision and spatial issues and problems with a sense of smell can be noted at an early stage.

Do Alzheimer’s effect only older people?

Alzheimer’s usually affects older people. However, early-onset dementia can be seen in people who are <65 years age and even younger.

How to minimize the risk of developing Alzheimer’s?

Most of the times, Alzheimer’s is familial or genetic. However certain sporadic cases can be minimized by altering certain risk factors. Avoiding smoking and alcohol consumption, maintaining a healthy lifestyle with regular exercise, keeping blood pressure in control, maintaining healthy cholesterol levels, etc., can help in minimizing the risk.

What diet helps in lowering the risk of AD?

World Alzheimer's Day is observed on the 21st of September every year to raise awareness among people about Alzheimer's disease and dementia....
Read more
ALZHEIMER’S

Alzheimer’s disease: Leading cause of death

Alzheimer’s disease is an ailment that causes the degeneration of the brain cells, which leads to an improper functioning of the brain. It is...
Read more