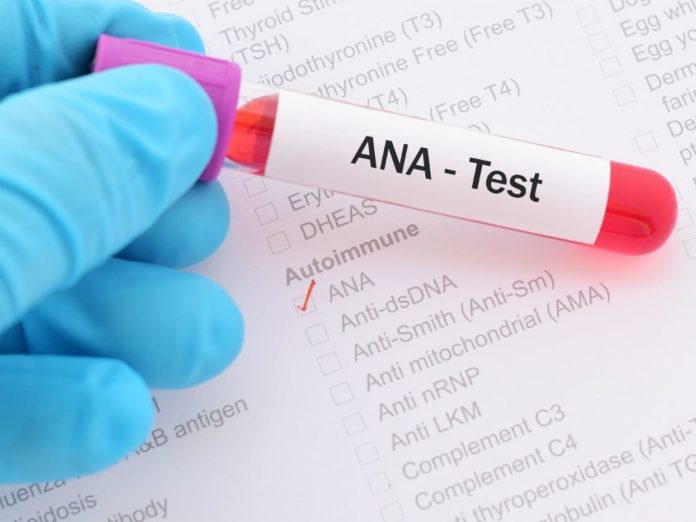 What is the antinuclear antibody test?

The antinuclear antibody test (ANA Test) recommended by doctors is a blood test that identifies ‘autoantibodies’ in the blood. These autoantibodies attack your cells and significantly damage your skin, muscles, joints, and various other parts of the body. Thus, a positive result on the ANA test indicates the presence of autoantibodies and the attempt of the body’s immune system to attack itself. This is also referred to as an autoimmune reaction. Your doctor may recommend that you undergo ANA testing if you are suffering from autoimmune diseases, such as rheumatoid arthritis, scleroderma, or lupus. In some cases, healthy individuals with no symptoms may test positive for the ANA test.

Your doctor would recommend an ANA test if you present with the following symptoms:

An ANA test may not necessarily confirm a specific diagnosis but rules out other probable diseases, thus helping your doctor understand your symptoms or diseases.

What are the risk factors associated with the ANA test?

There is minimal, almost negligible risk associated with the antinuclear antibody test. Since this test involves the blood sampling from the vein, you may experience minor bruising or pain at the spot where the blood was drawn or the needle was inserted. As very little blood is drawn during this process, you will most likely not feel tired or exhausted after the blood tests. Most of the symptoms vanish a couple of hours after the blood test.

How to prepare for the antinuclear antibody test?

The ANA test is similar to any blood test that requires a blood sample. Therefore, if your doctor needs your blood sample only for the ANA test, you can normally eat and drink before the test and have the nurse take the sample at the specified time. In some instances, your doctor may also recommend other tests. This would require you to fast (not consume food for a particular period) before providing your blood sample. It would be best if you discussed the requirements with your doctor before giving your blood sample. You must also provide your medical history and the current supplements or medications if any.

What can you expect from the ANA test?

During the antinuclear blood test, a technician would be assigned to draw your blood for the analysis. A band (called a tourniquet) is tied on your upper arm to swell your vein, allowing an easy blood collection. An antiseptic is applied to that area, and a needle is inserted to draw the blood. The area is then cleaned with antiseptic again, and the blood is dispensed into a tube and sent for analysis. The blood test takes only a few minutes, and after the band is removed, the technician would place a bandage over the area to prevent further bleeding.

What are the possible results of the ANA test?

The results from the antinuclear antibody test can be one of the following:

You must visit the doctor if you observe frequent fevers, rashes, swelling and joint pain, and muscle pain. Your doctor would recommend the antinuclear antibody test to diagnose autoimmune diseases, such as lupus or rheumatoid arthritis. If blood tests indicate the presence of autoantibodies, your doctor may recommend certain other confirmatory tests to diagnose the medical condition.

An antinuclear antibody test is a diagnostic test prescribed by your doctor in an undiagnosed autoimmune disease. The ANA test identifies the presence of autoantibodies in the blood. A positive test result indicates the presence of autoantibodies, thereby indicating an autoimmune disease. In some cases, even a healthy individual with no symptoms can test positive for the ANA test. The doctor then recommends other tests to confirm the medical condition to prescribe medication to control the disease. While the ANA test is not a confirmatory test for any disease, it helps establish if autoantibodies are present in your blood.

1. Does the antinuclear antibody test have anything to do with age?

Some studies suggest that the antinuclear antibodies in the blood tend to increase with age. Therefore, approximately one-third of healthy adults over sixty-five may display a positive ANA test result.

2. What infections can be associated with a positive ANA test?

Many conditions associated with immune dysfunction can cause a positive ANA test. Some of these infections are certain forms of liver diseases, such as autoimmune hepatitis, cirrhosis, hepatitis C, Hashimoto’s disease, and Grave’s disease.

3. Is a disease arising from a positive ANA test curable?

How is a CT angiogram performed?

Hyperhydration: Can drinking too much water be Harmful to your Health?

What are Electrolytes, and Why are they Essential for our body?

Hyperhydration: Can drinking too much water be Harmful to your Health?

What are Electrolytes, and Why are they Essential for our body?