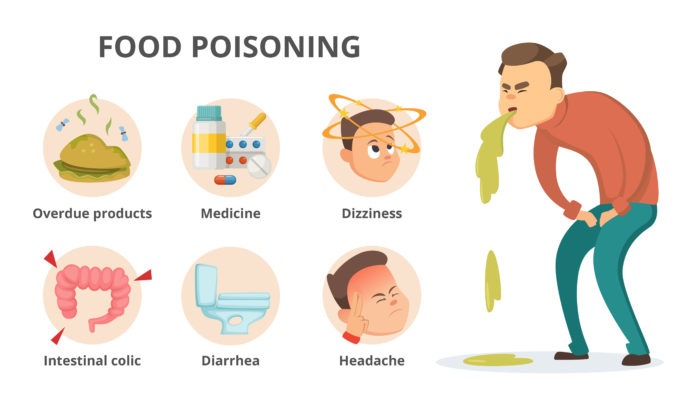 Food poisoning is not uncommon, although it is unpleasant. Every year, 48 million Americans (about one out of every seven) get food illness, according to the Centers for Disease Control and Prevention (CDC). 128,000 of the 48 million people are in hospitals.

Food poisoning was first observed in the 1880s and came to be synonymous with stomach flu. The number of people contracting gastric illness increased, and today 1 out of every 10 people suffer from the condition at one time or another.

How food poisoning affects you will depend on how well your immune system fights the infection People often feel weak in the initial. If the condition becomes severe, loss of appetite is noticed in the patient.

In very rare cases, there is a need to see a doctor; otherwise, the illness resolves in a week or two. People of old age are at higher risk for suffering a case of food poisoning due to a weak immune system that cannot fight infectious organisms easily.

What are the Food Poisoning symptoms?

Depending on the cause of the illness, the symptoms may differ. The following are some of the most common signs and symptoms of food poisoning:

Food poisoning can cause a variety of symptoms, including:

When should you consult a doctor?

In most cases, it is not required to see a doctor for a case of food poisoning. Very rarely, a severe case of this condition can present, primarily in the elderly or individuals with a weak immune system.

When the following symptoms get aggravated, you should see a doctor:

If an infant has a fever of 101 degrees and is dehydrated, then it is recommended to see a doctor.

What are the causes of food poisoning?

Bacteria, parasites, and viruses are the three most common causes of food poisoning.

Almost the majority of the food humans eat has these germs. On the other hand, cooking usually destroys viruses in food before they reach our plates. Because raw foods do not go through the cooking process, they are a common source of food illness.

Food will occasionally come into contact with microbes found in faeces or vomit. This is most likely to happen when a sick person prepares food without washing their hands beforehand. Contaminated meat, eggs, and dairy products are common. Water can also be contaminated with pathogenic organisms.

By far the most common cause of food poisoning is bacteria. Food poisoning can be caused by bacteria such as:

Food poisoning from parasites is less prevalent than from bacteria, yet parasites that transmit through food are exceedingly deadly. They are as follows:

A virus can also induce food poisoning, such as

Food poisoning is typically treatable at home. Here are a few things you can do to aid with food poisoning:

Caffeine, which can irritate the digestive tract, should be avoided. Teas with soothing herbs like peppermint, dandelion, and chamomile and, which are decaffeinated, can help soothe an upset stomach.

Loperamide and Pepto-Bismol are two over-the-counter (OTC) drugs that can help you control diarrhoea and nausea. But, you should see a doctor before taking these treatments because the body eliminates the poison through vomiting and diarrhoea. Additionally, taking these medications may conceal the severity of your disease, causing you to procrastinate getting professional help. Pyrantel pamoate (Reese’s Pinworm Medicine) is a popular pinworm treatment.

Although most food poisoning cases resolve independently, depending on the organism that caused their illness, some patients may benefit from prescription drugs.

People who are older, immunocompromised, or pregnant may benefit from prescription drugs. Antibiotic medication during pregnancy helps to prevent infection from spreading to the unborn child.

A C. botulinum infection is considered a medical emergency. Seek medical attention as soon as possible. A doctor will administer an antitoxin if you have C. botulinum. BabyBIG, a unique antitoxin, will be given to the babies (botulism immune system globulin).

Without therapy, food illness usually improves within 48 hours. Try the following to keep yourself more comfortable and avoid dehydration as you recover:

If your case is severe

You may need intravenous (IV) fluid hydration at a hospital if you have severe food illness. In the most serious cases of food poisoning, you may have to stay in the hospital for a longer period of time to recover. Severe cases of C. botulinum, which are uncommon, may necessitate artificial breathing.

What to eat and drink if you have food poisoning

It’s advisable to avoid solid foods until the diarrhoea and vomiting have subsided. Instead, ease yourself back into your regular eating routine by eating or drinking bland, low-fat foods like:

Even if you believe you’re feeling better, try to avoid the following harder-to-digest meals to avoid aggravating your stomach:

Examples of dairy products include milk and cheese

Also stay away from:

How is food poisoning diagnosed?

Based on your symptoms, a doctor may be able to diagnose the sort of food poisoning you have. Blood tests, stool testing, and tests on the food you’ve eaten may be used to discover what’s causing the food poisoning in severe situations. A urine test may also be used by a doctor to determine if you are dehydrated as a result of food poisoning.

Food poisoning can strike anyone at any time. Food poisoning affects nearly everyone at some point in their lives, according to statistics.

There are some groups that are more vulnerable than others. These are some of them:

How to prevent food poisoning?

The easiest approach to avoid getting food poisoning is to handle your food carefully and avoid eating anything that could be dangerous.

Because of the way some foods are made and processed, they are more prone to induce food poisoning. Certain foods may contain infectious pathogens that are killed during cooking, such as:

Food poisoning can develop if certain foods are consumed raw, improperly cooked, or if hands and surfaces are not thoroughly cleansed after contact.

Food poisoning can also be caused by the following foods:

What are the complications of food poisoning?

Complications with food poisoning are extremely rare, so there is nothing to worry about if you have normal symptoms.

Possible complications generally occur due to severe types of bacteria such as botulism. Such cases of food poisoning result from having undercooked food or food which isn’t stored properly.

The most common complications are:

It is important to keep in mind that these are very rare scenarios and mostly present in individuals who are already medically vulnerable.

It is an uncomfortable health condition, but the good thing is it lasts only about two to three days. It takes only a few basic measures to avoid being exposed to organisms that cause food poisoning. If the symptoms get worse, see a doctor as soon as possible.

Can you die from food poisoning?

How quickly does food poisoning kick in?

The signs and symptoms may appear immediately after ingesting the infected food, or they may appear days or even weeks in the future. Food poisoning symptoms may persist anywhere from some hours to many days.

How to get relief from stomach pain due to food poisoning?

As your stomach settles, stop eating for the first few hours. Replace the minerals you lose during diarrhoea and vomiting with water, broth, or an electrolyte solution. Start with tiny portions of bland, non-fat items like toast, rice, and crackers when you’re ready. Get a lot of rest.

What are the different types of Food Poisoning?

There are at least 250 different types of food poisoning, but the most frequent are e. coli, listeria, salmonella, and norovirus, also known as ‘stomach flu.’ Botulism, campylobacter, vibrio, and shigella are some of the less frequent infections that can be transmitted by food or food handling.

Diet and Nutrition for Kidney Patients

How Much Calorie Do I Need Per Day?

Diet for Jaundice: Foods to Eat and Avoid