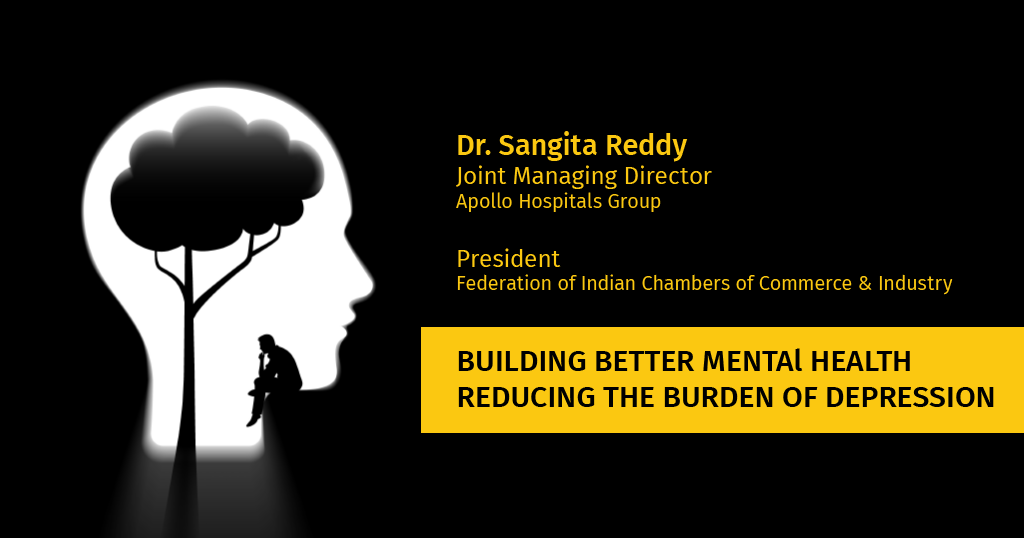 Sadness touches all of our lives at some point in time differently, but depression as a condition is different from usual mood fluctuations and short-lived emotional responses to challenges faced in everyday life. It can have enormous depth and staying power. It is more than a passing bout of sadness or dejection or feeling dejected. Depression can leave you feeling continuously burdened and can sap the joy out all once pleasurable activities. It has both physical and emotional, symptom manifestations. Depression a common mental disorder results from a complex interaction of social, psychological and biological factors. People who have gone through adverse life events such as unemployment, bereavement, psychological trauma to quote a few are more susceptible to develop this condition. It causes the affected individual to suffer greatly and function poorly at work, at school, and in the family.

Today mental health disorders are among the leading causes of morbidity and mortality worldwide and are estimated to cost the global economy $16 trillion by 2030 (1) with an estimated 300 million people worldwide suffering from depression(2). Unipolar depressive disorders which were ranked as the third leading cause of the global burden of disease in 2004 are estimated to move into the first place overtaking lower respiratory infections and diarrhoeal diseases by 2030(3). At its worst, depression as a condition can lead to suicide which today is the second leading cause of death in 15-29-year-olds. Globally close to 800 000 people die due to suicide every year(4) There are multiple variations of depression that an individual can suffer from, with the most generic distinction being in people who have or do not have a history of manic depressive episodes. Depending on the number and severity of symptoms, a depressive episode in a person can be categorized as mild, moderate or severe. An individual with a mild depressive episode will have minor difficulty in continuing his daily work and social engagements but do not cease to function completely. However, during a severe depressive episode, the sufferer will be able to continue his / her social, domestic activities only to a limited extent.

Most mental illnesses are treatable. Although there are known, effective treatments depression isn‘t a one size fits all illness. Just like a rash or heart disease, depression can take many forms. There are a cluster of symptoms that are typically present but one person‘s experience of depression most of the time differs from other Individuals. Diagnosis, which usually takes place in the primary healthcare clinic, requires detailed history documentation and examination to identify any comorbid disorders (typically anxiety, alcohol-use disorders, and chronic illnesses such as cancer and diabetes).

Today there exist effective treatments for depression to be managed in primary healthcare clinics however estimates suggest that around two-thirds of people experiencing depression go unsupported Sadly, between 76% and 85% of people in low- and middle-income countries receive no treatment for their disorder (5).

Why is this the case?

The causes of the diagnostic, treatment and care gap for depression are complex, but the following represent the most significant barriers: A persistent social stigma: This compels people to conceal their mental illness, or fails their ability to recognize that they or someone close to them is depressive:These misunderstood stigmas are the underlying reasons why those with mental health problems are treated differently from those with physical health conditions. The variety in type and frequency of depression symptoms: As I had stated earlier depression is not one size that fits all illness. It exists on a spectrum from good health through to mild and then more severe illnesses. Episodes vary from being time-limited to chronic. The difficulty of pinpointing the right time to intervene, coupled with the challenge of making a good diagnosis, and the difficulty of identifying an appropriate treatment regime, results in a lack of consensus about what constitutes a depressive disorder Lack of qualified professionals: In almost half of the world‘s countries, the ratio of psychiatrists to people is 4.0 or less to every 100,000. In lowincome countries, the ratio is 0.1 to every 100,000(6).

Role of technology in mental healthcare

Tech start-ups in the mental health space have seen funding treble in the past five years, reaching a record $602 million in 2018(7). The rapid spread of smartphone apps, sensors, chatbots, social media, digital voice assistants along with cloud-based, deep-learning artificial intelligence (AI) and machine learning (ML) tools offers new opportunities to scale access to mental healthcare. Of all these mobile technologies, the internet and AI (including machine learning and big data) in particular have a tangible impact on depression diagnosis and treatment. Access to both phone and internet has enabled the growth of mental health apps known as mobile medical apps (MMAs) which is today one of the fastestgrowing segment of the app market, with more than 10,000 consumer-targeted apps available to download. Artificial Intelligence (AI) is today an integral part of the healthcare industry. Through approaches such as deep learning, AI uses data models and algorithms to learn from the world around it. Predictive systems find relationships between points in historical datasets and their eventual outcomes. In turn, this helps predict future results. Similarly, NLP and machine learning have made it possible to interpret someone‘s tone, inflection, energy and pitch during phone calls, giving caregivers additional information (beyond the content of the call) on which to base a diagnosis or a progress assessment.

Today there exist effective treatments for depression to be managed in primary healthcare clinics. Health-care providers offer psychological treatments such as behavioural activation, cognitive behavioural therapy (CBT) and interpersonal psychotherapy (IPT), or antidepressant medication. Economic analysis has indicated that treating depression as a condition in primary healthcare is feasible, affordable and cost-effective. “Exciting advance in the treatment field has been the discovery of a drug which can rapidly improve severe depression and suicidal thoughts – within hours or in some cases even minutes” Murali Doraiswamy Professor of psychiatry and behavioural sciences, Duke University Health System.

Reducing the burden of depression

The prevention of depression is an area that deserves attention. Many prevention programs implemented so far across the lifespan have positively provided evidence on the reduction of elevated levels of depressive symptoms. Effective community approaches to prevent depression focus on strengthening protective factors and the reduction of risk factors. Examples of strengthening protective factors include school-based programs targeting cognitive, problem-solving and social skills of children and adolescents as well as exercise programs for the elderly. Interventions for parents of children with conduct problems aimed at improving parental psychosocial well-being by information provision and by training in behavioural childrearing strategies help reduce parental depressive symptoms and show significant improvements in children outcomes.

The road travelled so far…

Analyzing development trends over the last two decades it is clear that there has been substantial development in the field of addressing depression at a global, national and local level. High-quality epidemiological research has helped quantify the extent and impact of depression disorder on individuals, families, and societies. Depression and other mental health disorders are now ranked at or near the top of public health challenges and priorities of the World Health Organization. Increasingly, mental health services are becoming stronger and better integrated into primary health settings. Today there exists a solution for treating depression. Efficacious and cost-effective treatments are available to improve the health and the lives of millions of people around the world.

Having said this, there still exist vast differences in standards of available services between and, often, within countries. On an individual, community, and national level, it is time to educate ourselves about depression and support those who are suffering from this mental disorder.