Busting the Myths of HIV 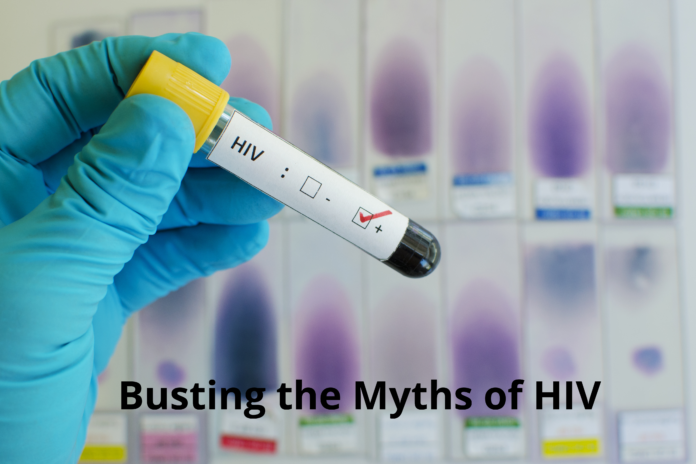 HIV, or human immunodeficiency virus, attacks the human immune system. If left untreated, it can lead to AIDS or acquired immunodeficiency syndrome. . Unfortunately, India has the third-highest population of persons living with HIV, which amounts to over 2.1 million people.

Due to the nature of transmission of HIV and the serious nature of AIDS, there is a lot of prejudice around the condition. Many myths and half-truths surround the condition, which makes it harder for people to get tested and treated in a timely manner. While no cure exists for HIV, the many medical breakthroughs over the years have allowed it to be managed efficiently through various treatments.

HIV is a retrovirus that attacks the immune system in the human body. In particular, it attacks and kills CD4 cells, which are a type of immune cell known as T cells. As the CD4 cells are destroyed, the immune system becomes severely compromised, making the affected person more susceptible to infections and cancers. If left untreated, HIV causes AIDS, where the immune system is completely destroyed.

Fortunately, antiretroviral drugs can ensure that a person with HIV has the same life expectancy as any other person. However, the stigma attached to the condition is still very high. Many people believe that HIV can be transmitted through touch or by sharing common objects like a comb.

How is HIV Transmitted?

HIV can be transmitted through the exchange of certain bodily fluids with an infected person. These fluids are:

Some of the ways in which HIV is transmitted are:

It is important to combat the various myths and stigma attached to HIV. Since this condition is usually concentrated in vulnerable groups like sex workers and gay men, it has become villainized into a disease that must be shunned.

What are the Common Myths of HIV?

When the first few cases of HIV were reported in the early 1980s, there was an immediate furor surrounding the condition and the people who have the virus. The virus was first concentrated in gay men, which added to the stigma of the disease. As more research has been done on the virus, we have learned more about the condition. Unfortunately, some of the early prejudices of the virus still continue to this day. Here are some of the most common HIV myths that have been essentially debunked.

Antiretroviral therapy or ART has been available since as early as 1996. These powerful drugs do not kill the virus; rather, they inhibit and block the lifecycle of the virus. With many advances in ART research and development, there are numerous antiviral drugs that can be prescribed to effectively stop the advancement of HIV. The sooner ART is begun, the better its effects on the disease. People who have HIV, but are on effective treatment of ART, have the same life expectancy as any other person.

While a significant population of HIV patients is indeed gay men, there is no evidence to show that straight people are not affected by the virus. In fact, around 24% of HIV patients are straight, of which more than 60% are women.

HIV can be transmitted through a number of different ways. Sexual orientation does not disqualify you from the disease since it depends on numerous factors like always using condoms when having sex.

ART has advanced far enough to allow people with HIV to have children safely. If the treatment is started early enough, and the woman takes their ART medications as prescribed through their pregnancy and 4-6 weeks after delivery, then the chances of transmitting HIV to the baby is less than 1%. If the male partner has HIV, then regularly taking ART lowers the risk of transmission to virtually zero. Anybody with HIV must work with a healthcare professional to actively manage their condition, especially if they want to have children in the future.

HIV causes AIDS, but not all people with HIV will develop AIDS. AIDS is a syndrome where the immune system has been attacked to a point where the person has a severely compromised immune system, making them susceptible to various opportunistic infections. With the active treatment of HIV, the onset of AIDS can be delayed indefinitely. The earlier that HIV is treated, the better the chances of not developing AIDS.

Myth 5: I don’t need to use a condom with someone who tested negative for HIV

HIV infections can take up to three months or in some cases even upto year  to show up on a test. Even if you test negative for the virus now, you must wait for three months and take another test to completely rule out the disease. It is also very important that you have honest conversations about your sexual history with any new partner. Unless you are sure that you are in a monogamous relationship with the person who has tested negative, you should not have unprotected sex.

Since there is so much stigma around HIV, it is difficult to get people to get regular HIV screenings and other STD tests done. Knowing the symptoms of HIV is key to breaking the stigma of testing for the disease.

What are the symptoms of HIV?

The symptoms of HIV depend entirely upon the stage or progression of the disease. The first stage of HIV is known as a primary infection or acute HIV. The symptoms of this stage include:

The symptoms of AIDS are:

The best way to manage HIV is to address it with a medical professional as soon as possible. If you are at risk of contracting the virus, then you should visit a doctor at a reputed hospital like Apollo Hospitals.

HIV is a serious condition that can severely affect your immune system. It can lead to AIDS if left untreated, making you particularly vulnerable to opportunistic infections like pneumonia, TB, cryptococcal meningitis, and cancer. However, with effective and timely intervention, a person with HIV can lead a healthy life and have a normal life expectancy.

● Can you tell if a person has HIV/AIDS by their looks?

There are no visual markers for either HIV or AIDS. Even the symptoms of HIV are pretty unremarkable and can easily be dismissed as symptoms of the flu or cold. People on ART do not show any symptoms and are no different from people with HIV.

● Should I avoid being around people with HIV?

Unprotected oral sex can also transmit HIV, even if the risk is minimal. Use a condom or a dental dam when indulging in oral sex with a new partner.