Home Health A-Z Cardiology Can there be complications with Pacemakers?
Health A-ZCardiology

Can there be complications with Pacemakers? 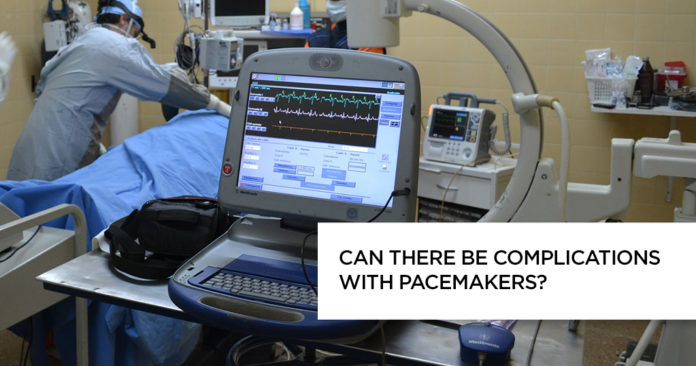 A pacemaker is a compact battery-operated device that helps your heart to beat in its natural rhythm. The doctor will surgically implant it underneath the skin of the patient’s chest if they have an arrhythmia. It is a health condition in which your heartbeats are irregular. It can be either too slow (more common) or too fast.

What are the different types of pacemakers?

There are three types of pacemakers. It includes the following –

Why does a doctor suggest a pacemaker?

The fundamental role of a pacemaker is to help regulate your heart’s functioning by controlling the heartbeat. Your doctor can either implant it temporarily or permanently, depending on the severity of your condition and treatment needs.

Book an Appointment with Cardiologist

Your heart – how does it beat?

Your heart is a fist-sized, muscular, and hollow organ that sits at the center of your circulatory system. It has four chambers –

The upper two chambers include –

The lower two chambers include –

All these chambers work together in coordination with the electrical system of your heart to allow it to beat appropriately. Your average heartbeat per minute, at rest, ranges from 60 to 100.

Your heart’s electrical system regulates your heartbeat and starts at the sinus node (your natural pacemaker) , spreading the electrical impulses to the bottom. It results in coordinated contractions in the muscles of your heart, leading to the pumping of blood.

However, due to aging, certain heart conditions such as heart attack, genetic defects, and medication, your heart may happen to beat abnormally. In such cases, your doctor may recommend a pacemaker.

A pacemaker – how does it work?

A pacemaker imitates the process of the natural electric system of your heart. It has two components –

Some facts about pacemakers

Can there be complications with pacemakers?

Yex, complications with pacemakers are common. There are two basic categories of the same, i.e. –

How to prepare for a pacemaker insertion procedure?

There can be several reasons behind irregular heartbeat. Therefore, your doctor will perform a few tests to identify the underlying cause of your condition beforehand. The tests include the following –

What are the risks of getting a pacemaker?

Some of the common risks of getting a pacemaker to include –

Pacemaker insertion Procedure – Before, During, and After

A pacemaker insertion surgery takes a couple of hours to complete. Before the procedure, your doctor will clean your chest with a sterilizing agent . Then, he or she will anesthetize the site of incisions with the help of local anesthesia.

What precautions should you take with a pacemaker?

Although your pacemaker is less likely to stop functioning owing to electrical interference(s), it is a good idea to be careful and take the necessary precautions. Take a look at the following precautions –

Be in touch with your doctor!

The battery of your pacemaker is likely to last for 5 to 15 years. Make sure to pay visits to your doctor at an interval of 3 to 6 months.

Book an Appointment with Cardiologist

Verified By Apollo Cardiologist
https://www.askapollo.com/physical-appointment/cardiologist
The content is reviewed and verified by our experienced and highly specialized team of heart specialists who diagnose and treat more than 200 simple-to-complex heart conditions. These specialists dedicate a portion of their clinical time to deliver trustworthy and medically accurate content
Facebook
Twitter
WhatsApp
Linkedin
Previous articleBlood in your stool? Home Remedies to Relieve Yourself from Hemorrhoids
Next articleCould the Pain in Your Legs Be Sciatica? Here’s How to Find Out

Staying active and working out is not always stressful.  Walking is the most simplest way to work out, and you can do...
Read more
Health A-Z

Overview The colon, also known as the large intestine, is a part of the digestive tract.
Read more
Health A-Z

Males Feeling Pain in Your Groin Area? Get Checked For Torsion