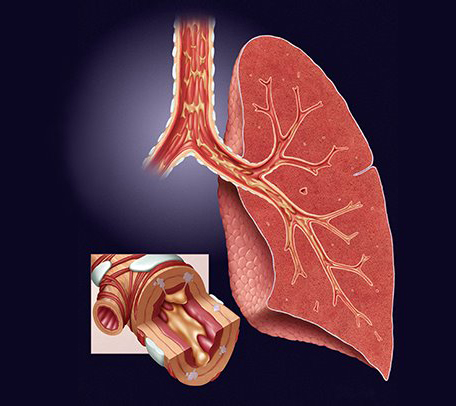 Chronic bronchitis and COPD is a common pulmonary disorder amongst the Indian population. We see smokers, non-smokers and females, with prolonged complaints of dyspnoea on exertion, while walking into our outpatient department. A simple history and clinical examination can establish the diagnosis easily. What follows next are the facts, which a must for even anyone to know about this peculiar disorder.

Bronchitis can be called inflammation of the linings of bronchial tubes. These are the small tubes that pass air to your lungs and carry air from it. Individuals who have bronchitis frequently suffer from a cough along with the release of thick mucus. They are likely to suffer wheezing, chest pain and shortness of breath. There are two types of Bronchitis – acute and chronic.

Acute bronchitis may result from cold or other respiratory issues but improves within a couple of days without creating further discomfort. Chronic bronchitis is a more threatening condition, which develops progressively instead of striking all of a sudden. It can be described as recurrent episodes of bronchitis which tend to last for a long time. The constant inflammation of the airways results in an increased amount of sticky mucus present in the airways. And, this creates a hurdle when the air is passing in and out of the lungs. The blockage in the wind stream deteriorates after some time, bringing about breathing challenges and generates more mucus in the lungs.

Chronic bronchitis disease occurs when the coating of the bronchial tubes become inflamed and irritated constantly. The constant disturbance and swelling can harm the airways and cause the development of sticky mucus, making it troublesome for air to travel through the lungs. This prompts breathing challenges that continuously escalate and cause discomfort. The inflammation is likely to harm the cilia, which are the hair-like structures that assist in keeping the air passage free of irritants. When the cilia don’t perform appropriately, the airways turn into a breeding ground for bacterial and viral contaminations.

Contaminations normally trigger the underlying aggravation and swelling that leads to acute bronchitis. Chronic bronchitis is, however, mostly caused by cigarette smoking. In reality, more than 90 percent of those with the infection may have been smokers or have a history of smoking. Breathing in tobacco smoke also temporarily affects the cilia, so continuous smoking for a long period of time can cause serious damage to the cilia. Chronic bronchitis may worsen over a period of time due to these habits.

Second-hand smoke can also add to the cause of chronic bronchitis. Other causes incorporate long term exposure to air pollution, chemical and industrial dust and toxins and dangerous gases. Chronic lung diseases may further harm the lungs and aggravate constant bronchitis symptoms.

Signs of a COPD Exacerbation

After an extensive period of aggravation and disturbance in the bronchial tubes, chronic bronchitis can result in several symptoms and it includes a relentless and heavy cough that releases mucus from the lungs. As time passes, the production of mucus increases gradually and it starts building up in the bronchial tubes creating discomfort in the air flow, which leads to causing more difficulty in breathing.

Being aware of the signs of a COPD exacerbation can go a long way in preventing the disease from worsening, and can also decrease the life-threatening risks that occur with a sudden onset of COPD symptoms.

A lung infection caused by a virus or bacteria, such as a cold or some other illness, can lead to COPD exacerbations. COPD symptoms can also suddenly worsen due to constant exposure to these harmful pollutants.

Warning signs of a COPD exacerbation may include:

Many individuals do not bother about the symptoms of chronic bronchitis and misunderstand by thinking it as smoker’s cough. Nonetheless, it’s essential to contact your specialist immediately on the off chance that you have even the slightest doubt about having bronchitis. Neglecting the symptoms and treatment for chronic bronchitis significantly raises the danger of serious lung damage, which can prompt respiratory issues or heart failure.

Guidelines for treating COPD are set out in the Global Initiative for Chronic Interstitial Lung Disorder (GOLD).  COPD treatment includes:

According to Schechter, oxygen therapy is effective in prolonging life. Patients with COPD need to monitor levels at home, especially at night, and not solely rely on a test at the doctor’s office to determine if they may require oxygen therapy.

“The physical conditioning is geared to people who have lung disease, and it can improve the patient’s endurance. Even though lung function may not improve, the person with COPD is able to be more physically active,” says Schechter.

Depression and denial are common: “Some patients may be embarrassed about having COPD, which leads to depression and denial,” says Schechter. “Many feel duped by cigarette companies and feel that they brought the problem (COPD) on themselves.”

Schechter urges patients with COPD who smoked to stop worrying. “Smokers are not self-destructive, lazy or unmotivated.”  People smoke because they are addicted to nicotine, he says.

It is important to keep in mind that the more you know about COPD, the easier it is to control it.