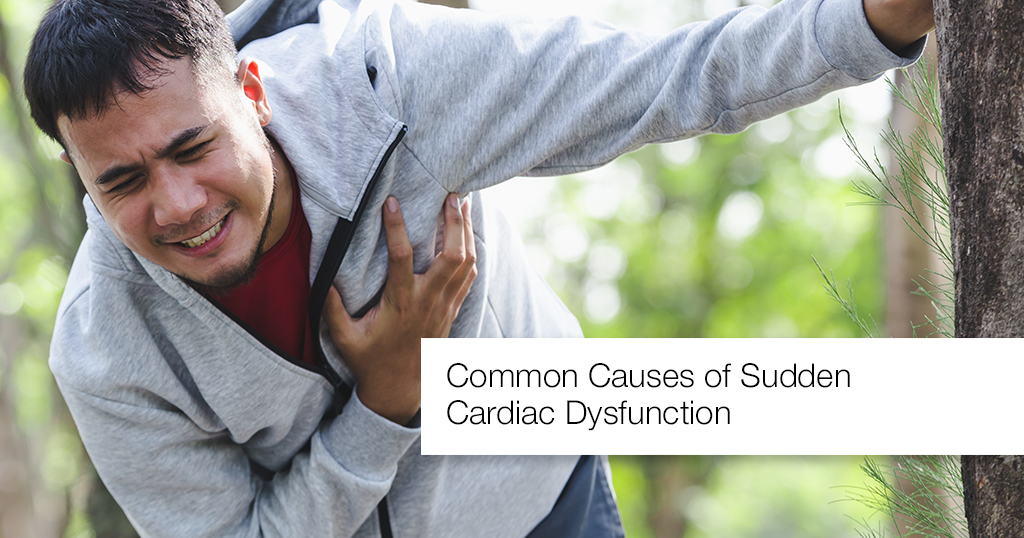 Sudden Cardiac Dysfunction/Arrest is probably one of the largest causes of natural death in the world. You are most likely to have at least one acquaintance in life who has survived a cardiac arrest (or not). This kind of heart related disorder is known to occur most commonly in adults within the age range of mid 30s to late 40s and twice as much in males than females.

This dysfunction of the heart leads to the abrupt stoppage of the heart functions, loss of breathing and consciousness, and could lead to death if not treated immediately. So, let’s take a closer look at what it actually is.

How is Sudden Cardiac Dysfunction Different from a Heart Attack?

Now, most of you might be already mistaking SCD to be a posh medical term for heart attack, but in reality they are two completely different heart conditions. Heart Attack or ‘Myocardial Infarction’ takes place when there is a blockage in any one of the coronary arteries, preventing the heart from getting sufficient amount of oxygen-rich blood.

On the other hand, sudden cardiac arrest occurs when there is a malfunction in the electrical system of the heart. This leads the heart to beat dangerously and extremely fast, and as a result, the ventricles start to quiver – a condition known as ‘ventricular fibrillation’. The first few minutes are very crucial as the blood flow to the brain gets cuts down drastically and the person loses consciousness, which can ultimately result in death.

In many cases, sudden cardiac arrests take place without any prior symptoms and signs. But sometimes there are drastic signs and symptoms, such as:

Cause and Conditions that Could Lead to Sudden Cardiac Arrests:

The most common cause of a sudden cardiac dysfunction is an abnormal heart rhythm better known as arrhythmia. The electrical system of the heart is responsible for controlling the rate and rhythm of the heartbeat. If something goes wrong with it, your heart starts beating fast and in irregular rhythms.

Most of the arrhythmias are harmless, but if taken place in a lower chamber of the heart or the ventricles, it leads to a sudden cardiac arrest. These racing, erratic electrical impulses cause ventricular fibrillation and the heart is unable to pump blood anymore. Consequently, if left untreated, death occurs within minutes. Following are some heart conditions which could lead to a sudden cardiac arrest:

There are quite a many factors which could increase a person’s risk of sudden cardiac arrest and consequent death. These include:

Now that you know all of the complexities and seriousness of this disease, don’t you want to know what you need to do in case you are in such a crucial situation and a person’s life depends on you? First of all, dial the local emergency personnel number and then do the following. Emergency treatment for sudden cardiac dysfunction is cardiopulmonary resuscitation (CPR) and defibrillation.

CPR is a manual process of repetitive chest pressing and breathing into the mouth which helps to supply oxygen to the lungs and to the brain. Another way to restore the normal rhythm of the heart is with the help of an electric shock to the chest i.e. Defibrillation. Survival of a sudden cardiac dysfunction is as high as 90% if the above measures are taken in the first few minutes.

Now that you know all about SCD and the crucial role of time in it, your job is to educate as much friends and family about the condition and immediate care required. You could also put in efforts to reduce your own risk of a sudden cardiac arrest by living a healthy lifestyle, being screened for heart conditions regularly, and going for regular check-ups to your physician.

Verified By Apollo Cardiologist
https://www.askapollo.com/physical-appointment/cardiologist
The content is reviewed and verified by our experienced and highly specialized team of heart specialists who diagnose and treat more than 200 simple-to-complex heart conditions. These specialists dedicate a portion of their clinical time to deliver trustworthy and medically accurate content
Facebook
Twitter
WhatsApp
Linkedin
Previous articleBREAKTHROUGH INNOVATION FOR LEAKING HEART VALVE – MITRAL REGURGITATION
Next articleHealing with Sleep Problems after a Heart Attack
RELATED ARTICLES
Cardiology