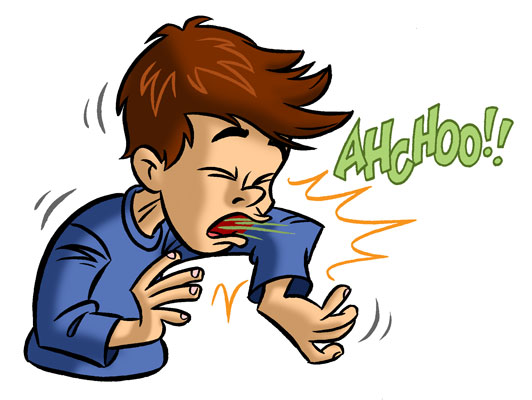 “Aaaaaanchuuuu” *snif snif*  well winter is coming, so is Christmas & the new years eve, with all of this, comes our yearly guest – the flu! So here is a little bit about what it is and how to keep your self well protected from this bug.

The flu – short form of the in-flu-enza virus is actually a bug – a virus, causing an infectious disease better known in its milder form to us as the ‘common cold’. With people sneezing, coughing and a runny nose to severe forms of lung and throat infections resulting in hospitalisation – it can cause it all !

Symptoms seen usually start with symptoms of low grade fever in the mornings to high temperatures during evening to night hours, a cold, some cough with a runny nose or sometimes even diarrhoea especially in children. Other features may include fatigue, body ache and rashes.

Usually it is self limiting illness, as it’s a viral infection and because of our god-gifted immune system – the bug is killed and the patient recovers in a couple of days.

More severe forms of disease are seen in patients with other co-existing diseases like asthma, lung disorders, extremes of age or with much more virulent strains of the influenza virus – like the infamous – swine flu. (influenza a h1n1)

So how do i protect myself?

The influenza virus can be spread in three main ways:

So protecting ourselves from this virus requires us to start right from our personal hygiene level, doing things like

Available in the market are vaccines for the human Influenza A and B with strains of H1N1 as well.

Taking the vaccine is recommended for health care workers, teachers, and patients with other coexisting illnesses amongst others so as to prevent spread of this disease.

People with the flu are advised to get plenty of rest, drink plenty of liquids, avoid using alcohol and tobacco and, if necessary, take medications such as paracatemol to relieve the fever and muscle aches associated with the flu

Antibiotics have no effect on the infection; unless prescribed for secondary infections such as bacterial pneumonia. Antiviral medication may be effective. If given early, but some strains of influenza can show resistance to the standard antiviral drugs but maybe tried in severe cases like oseltamivir.

According to the world health organization: “every winter, tens of millions of people get the flu. Most are only ill and out of work for a week, yet the elderly are at a higher risk of death from the illness.