HomePulmonologyCOPD – All you Want to Know
Pulmonology

COPD – All you Want to Know 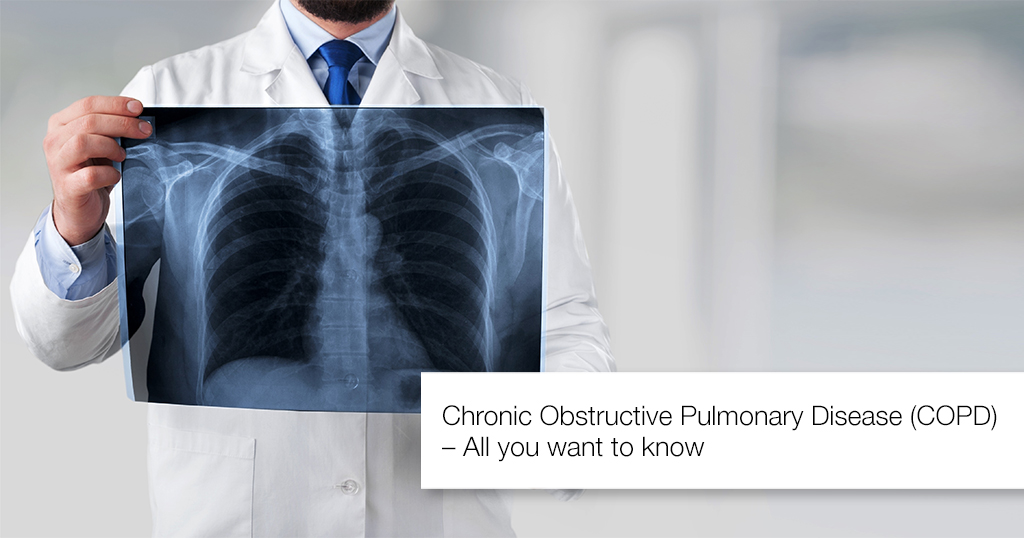 Are you or your loved ones keep coughing and feel short of breath? Do you or any of your loved ones feel a little more tired than usual after a day of walking? These could be symptoms of Chronic Obstructive Pulmonary Disease (COPD), a progressive loss of lung function that affects millions across the world.

The most common symptom is shortness of breath. It may be very subtle. A person might just think, “I am getting a little puffy while walking/climbing steps, or I’m getting fat, old.” People, generally, tend to put it aside and not worry about it.

However, ignoring those early signs means that many people only see their doctor when the disease has progressed, and more chronic and bothersome COPD symptoms set in. Occasionally, COPD comes on very suddenly; usually because an individual has been ignoring symptoms.

Chronic Obstructive Pulmonary Disease (COPD) is disabling lung disease that makes breathing difficult. It is an umbrella term for two different lung conditions, chronic bronchitis and emphysema, which are primarily caused by smoking. COPD affects the airways and air sacs within the lungs, thus making breathing difficult. It is also a significant cause of disability that becomes progressively worse if nothing is done to control it. Unfortunately, many people may not even be aware they have COPD. If you or someone you love has COPD symptoms such as shortness of breath, chronic cough, or increased sputum (thick mucus), it’s important to see a doctor as soon as possible.

COPD: What Happens in the Lungs?

While emphysema and chronic bronchitis are lung conditions have some similar symptoms, like wheezing and shortness of breath, they are different conditions.

Changes in our air sacs and the airways in our lungs together characterize COPD. These changes, which together reduces our ability to breathe easily, include:

The irritation and damage that cause chronic obstructive pulmonary disease (COPD) can have several possible causes, including:

With the exception of the inherited risk, these exposures can lead to chronic COPD or can cause acute COPD episodes, called exacerbations, in people whose COPD is under control.

Smoking and COPD: Smoking tops the list as a cause of COPD. The highest percent of COPD cases are due to current or former smoking habits. Cigarettes/Cigars and secondhand smoke also cause COPD. These effects are slightly stronger among women than men. People who have smoked are 12 to 13 times more likely to develop COPD than people who have never smoked.

Air Pollution and COPD: Lots of pollutants can cause COPD. Particulates in the air, such as particle exhaust from diesel engines, increase the risk of COPD. Studies have found that those who lived closer (100 meters) to a major road had a significantly increased risk of COPD, most likely due to the exhaust from cars and trucks.

Air pollution can contribute both to long-term chronic COPD and to acute COPD episodes. For example, a person whose COPD is under control may experience increased symptoms while visiting friends in a city when air pollution levels are high.

Inherited Genetic Risk and COPD: In about 1 percent of COPD cases, the disease is due to inherited genetic risk that results from a genetic disorder that causes low levels of a protein called alpha-1-antitrypsin. This form of COPD can strike people as early as their 30s even if they don’t smoke — although smoking will bring it on faster.

Just as long-term smoking or air pollution creates continuous irritation and damage that causes COPD, so do long-term exposures at work. Coal miners and people who work with cotton fibers are at increased risk for COPD. Other professions where occupational exposure to dust or chemicals is linked to COPD are:

Understanding the causes of COPD can help make decisions that will prevent or reduce the risk of COPD. Even if you have COPD, knowing that these exposures may cause an acute COPD episode can guide your daily decisions to maintain a healthier lifestyle.

Although there is no cure for COPD, getting the right treatment can help stay active and improve your health. Bronchodilators are medications for COPD treatment that open and relax your airways, making breathing easier. Some are designed to work for short-term relief of COPD symptoms, while other types are used on a long-term regular schedule. Other COPD treatment options include inhaled corticosteroids to reduce inflammation, mucolytics to help clear excess mucus from the airways, and oxygen tanks. Vaccines against the flu (which can be more deadly for people with COPD) and pneumonia are also important for COPD patients.

Adjusting to a Life with COPD

A diagnosis of COPD means many changes, not in the least rhythm of your everyday life. When arranging your daily schedule, your goals should be to conserve your energy and help reduce the symptoms as much as possible. Enrolling in a pulmonary rehabilitation program, resting when you need to, practicing breathing techniques for better control, finding shortcuts for activities, and managing your anxiety are all ways to help you adjust to a new way of life as a COPD patient and better manage your condition. And, while you are making these changes, don’t be shy about asking for help from friends or loved ones if you need it.