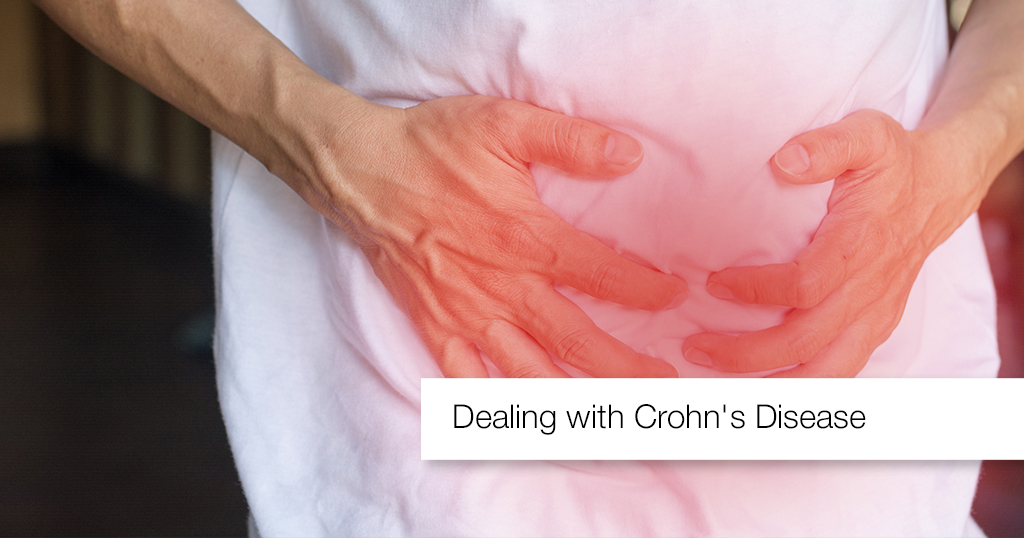 Crohn’s disease is a chronic condition in which many parts of the digestive system get inflamed. Patients with Crohn’s disease experience many common symptoms like abdominal pain, severe diarrhoea, fatigue, weight loss and malnutrition. Though there is still no cure for this chronic illness, there are medications and therapies that can reduce its severity and give some relief. If the Crohn’s patient along with the family takes certain measures, it can be dealt with in a better way . Not only medication, but changes in diet and nutritional supplements, will also help cope up the condition better.

Let’s know what Crohn’s disease is, it’s causes, symptoms and diagnosis before understanding how to deal with it.

What is Crohn’s Disease?

Crohn’s is an inflammatory bowel disease (IBD). It is a chronic illness that causes inflammation and irritation in your digestive tract. It is commonly seen in small intestine and colon (part of the large intestine). Crohn’s disease is the most common type of IBD. Ulcerative colitis and microscopic colitis are other common types. This illness mostly begins slowly and worsens over time. Patients can have short periods of relief ranging from weeks to years.

What are its causes?

The exact reason or the cause of Crohn’s is still not clear. However, the main factors that may influence are

Crohn’s condition develops gradually and with time, the symptoms and severity may worsen. Patients with Crohn’s can experience flares (Period during which symptoms are very active) and remission (the period during which not a single symptom is seen). With early detection, the severity of the disease can be decreased. In the early stages, the following symptoms can be seen:

Gradually, with the increase of severity of the disease, the following symptoms can be seen:

A single test cannot confirm Crohn’s. All the other possible health issues due to these symptoms need to be ruled out before confirming this condition. The first tests prescribed will be a Blood test and stool test.

All these tests are important to rule out all other possible illnesses.

Now, let’s understand how to deal with Crohn’s disease. To manage Crohn’s disease, we need to take holistic care. It is important to have medicines, the right diet along with the proper exercise to keep flares at bay.

Though there is no treatment for Crohn’s disease, the severity of the signs and symptoms can be controlled with the right medication and therapies. Dealing in the right way with this disease helps in remission, that is the symptoms get suppressed for a few months or years completely. This includes medication, surgery, lifestyle changes and dietary changes.

The medication given for Crohn’s patients solely varies patient to patient depending upon their symptoms and severity. The main aim of the medication is to reduce inflammation as it triggers all other symptoms. Reducing inflammation also helps in remission.

Other medication includes the use of Antidiarrheal medicines, antibiotics to help fight the intestinal bacteria, and Immunosuppressants. Also, medicines for symptoms like nausea, pain are prescribed.

If medication and therapies do not work, surgery is the next option.

More than half of the Crohn’s disease patients require surgery at least once in their lifetime. This surgery involves removing the damaged intestine and reconnecting the healthy parts. However, this is also not a cure for Crohn’s, the disease can recur.

The diet for patients varies, depending upon their condition. It is not easy to choose the right meal for a Crohn’s patient unless and until you know the condition of the digestive tract. Eating habits can worsen the symptoms of the patient. But, avoiding some foods and including a few can surely help control the flares.

Tips to keep in mind when having a meal:

To know what foods have to be avoided in your diet plan, you will need to determine which foods, if any, trigger yours. Most of the people with Crohn’s disease find that one or more of the following foods aggravate symptoms during disease flares. It is possible that at least some of these listed foods will trigger your symptoms:

Once you’ve identified foods that cause your symptoms to flare, you can choose either to avoid them or to learn new ways of preparing them that will make them tolerable.

For a Crohn’s patient, low-residue diet is always recommended which limits the wastes in the stool. Following this kind of diet will help to rest and recover from the flares.

Though exercise alone cannot manage this condition, it can surely help. Low-impact exercises like walking, jogging, swimming and few low-impact aerobics are good options for Crohn’s patients. Strengthening exercises are also good. But be sure to exercise and trained under the guidance of an expert. By taking some safety measures and being under the guidance of your doctor, Crohn’s patients can have a normal life.