What is the difference between Stroke and Heart Attack 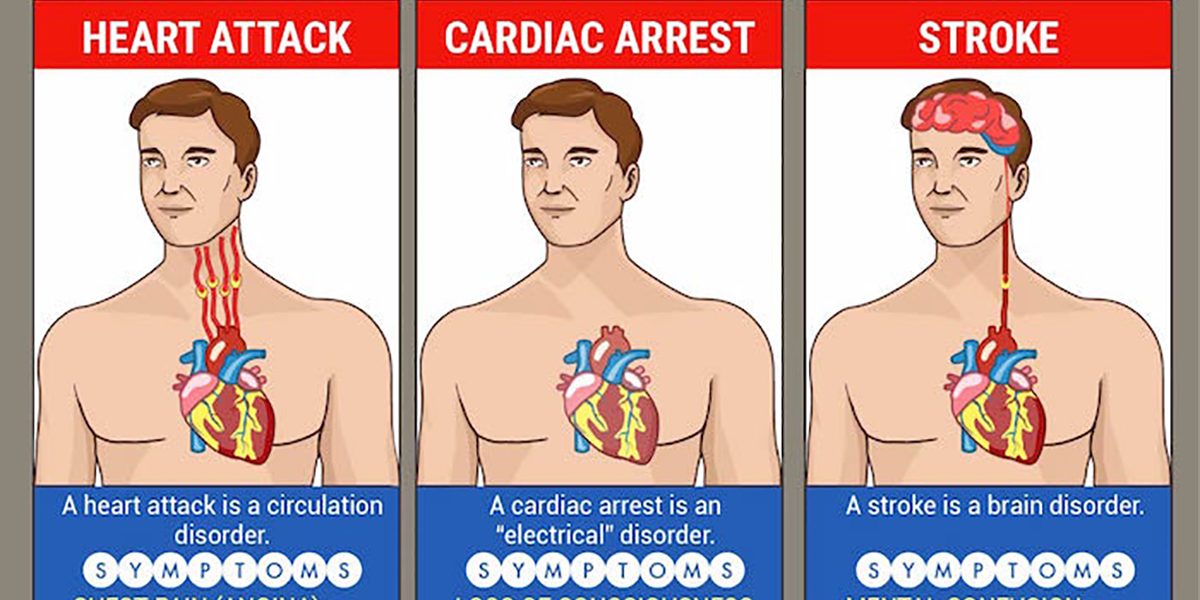 According to the Centers for Disease Control and Prevention (CDC), the fifth most common cause of deaths in the US is stroke. It kills nearly 1,40,000 Americans every year. Out of every 20 deaths, 4 deaths are caused by stroke.

According to the CDC, nearly 7,90,00 Americans suffer a heart attack every year. What is more alarming is that every 1 out of these 5 cases of heart attacks is silent. The patient doesn’t know that he or she had a heart attack.

The leading risk factors for both heart attack and stroke are the same. According to the Centers for Disease Control and Prevention (CDC), they include high blood pressure, obesity, physical inactivity, high low-density lipoprotein or LDL cholesterol, diabetes, smoking and passive smoking.

The Difference between Stroke and Heart Attack

Although the symptoms of heart attack and stroke may be similar, they are different from each other. A heart attack occurs when the inner wall of one of the main arteries gets blocked because of plaque. The blockage of arteries prevents blood circulation to the heart and the heart muscles get damaged.

On the contrary, a stroke occurs when you have a blood clot because of a ruptured vessel in the brain. A stroke is also referred to as a brain attack because it is caused by brain damage owing to lack of oxygen circulation.

The heart is one of the most vital and complex organs of the human body. Our modern lifestyles, however, are having catastrophic consequences for the organ. A heart attack happens when blood flow to the coronary artery is either reduced or blocked. This stops the blood flow to the heart. This happens due to the build-up of plaque (fatty substance and cholesterol) in the walls of the coronary arteries that supply your heart muscle with blood flow

Plaque does not develop overnight. It usually builds up over many years. If a piece of plaque comes off or gets detached from a heart artery, it may form a blood clot around it, which, in turn, can obstruct or stop the normal blood flow from reaching your heart muscle. Consequently, part of the heart muscle may not get enough oxygen. And, this part of the heart begins to get damaged and may even die if the blockage is not treated immediately.

When part of your heart muscle is damaged or is beginning to die due to lack of proper blood flow (that supplies oxygen and nutrients to the heart), it may result in a atrial fibrillation.

A stroke also called a ‘brain attack’, happens when a blood vessel carrying oxygen and other essential nutrients to the brain is blocked by a clot or bursts. And, brain cells begin to die when they do not get oxygen. This can lead to a stroke.

Treatment for stroke is most effective when administered within the first few hours after its occurrence. Therefore, it is important to distinguish the symptoms and act fast.

While both heart attack and stroke may have similar symptoms, there are some significant differences. In both cases, medical treatment is needed quickly.

Not all heart attacks are the same. It may not involve chest pain. There may be uneasiness or discomfort or a feeling of pressure on the chest. Some common heart attack symptoms are

Symptoms may vary between individuals. Some may have very mild or no symptoms at all and may suffer a ‘silent heart attack.’

Symptoms of stroke depend on where or which part of the brain is damaged. Brain damage can negatively impact a number of functions, such as speech, muscle control and memory. Some common stroke symptoms include:

How are heart attacks and strokes diagnosed?

If you have symptoms of a stroke or brain attack, your doctor will get a CT scan of the brain. The CT scan will show the areas of the brain which have blot clots. Your doctor might also get an MRI done.

A heart attack is diagnosed through an electrocardiogram, blood tests to check enzymes that indicate a heart attack and a cardiac catheterization, where a flexible tube is guided through the blood vessel inside the heart to check blockages.

How are heart attack and stroke treated?

A heart attack patient bought to the hospital would be given clot-busting medications. In some cases, procedures like angioplasty (surgical unblocking or repair of a coronary artery) or stent placement would be required. Selective serious patients may also require an emergency Coronary Artery Bypass (redirecting blood around a section of a partially or fully blocked artery in the heart to improve blood flow).

The first step towards treating a stroke is to recognize its type via a CT scan. If the scan indicates that the stroke is ischemic (caused by a blood clot that blocks or caps a blood vessel in the brain), and the patient has been bought to the hospital within 4.5 hours of the onset of symptoms, then thrombolysis (dissolution of a blood clot particularly induced artificially)can be administered.

How can you prevent heart attack and stroke?

While both heart attack and stroke can have life-threatening consequences for the body, stroke survivors are more likely to face serious disabilities. However, we can make some lifestyle changes and avail some health screenings like Whole Body Health Check or Healthy Heart Package regularly.

Are the signs and symptoms of heart attack or stroke different in women?

Which is worse: heart attack or stroke?

A Celebrity Fitness Coach has a Heart Attack While Climbing Stairs. Read more to avoid making the same mistakes that he did!

This Medical AI Program is Saving lives! Here’s why you need to read this right now