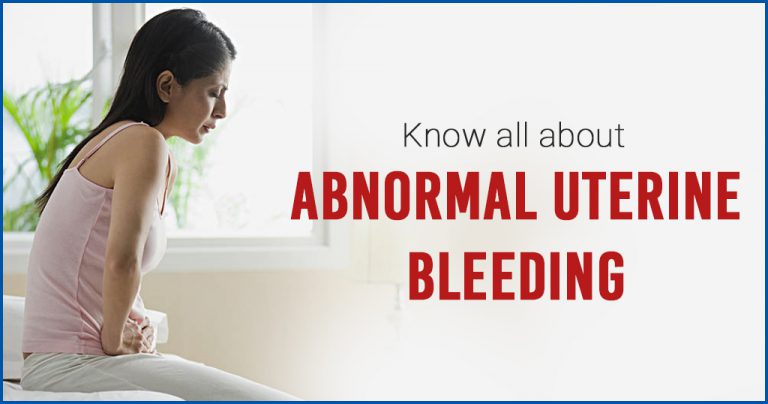 Women have menstrual cycles from the age of 11-12 years to about 50 years. In these 40 years’ time span women is likely to have a few episodes of bleeding which is not her usual cycle. If this abnormality persists then one needs to become concerned and consult a gynecologist. There may be an increase in the number of days of bleeding, there could be heavy bleeding with clots there could be associated pain or the bleeding could be irregular. It is normal for menstrual bleeding of a woman to last up to 7 days. Abnormal bleeding can happen when the menstrual period is not regular (when bleeding is longer than normal) is heavier than normal, or when the patterns of bleeding changes.

What is a normal menstrual cycle?

A normal cycle that comes every 28-35 days lasts for 7-8 days and is not associated with pain or clots. During the menstrual cycle, two hormones -estrogen and progesterone act on the lining (endometrium) of the uterus and causes it to grow. At the end of the cycle, this endometrium sheds and this is seen as menstrual bleeding.

Abnormal bleeding can occur at any age. There are times in a woman’s life when it is common for periods to be somewhat irregular. Often, periods are not regular for the first few years (about 9 to 16 years of age) after a girl begins to have periods. Starting as early as 35 years of age and more commonly when a woman nears menopause (about 50 years of age), it is normal for the menstrual cycle of a women to become shorter. It is also normal for a woman to skip periods or for bleeding to become lighter. However, if the bleeding gets heavier, it should be checked.

There are many causes of abnormal bleeding. Some of these problems are not serious and can be easily treated by counseling or medications. Others can be more serious. All should be checked. This can occur when the body makes too much or not enough of a certain hormone. Problems linked to some birth control methods, like intrauterine devices or oral contractive pills can also cause abnormal bleeding. Pregnancy-related causes are also responsible for abnormal bleeding. Sometimes tumours in the uterus or even cancer can be the reason.

To diagnose the cause for abnormal bleeding, a detailed history with the physical examination is essential. Additionally few blood tests and an ultrasound examination may be needed to rule out problems in the uterus.  It is helpful to maintain a menstrual calendar because it gives a good insight into the problem if the pattern is available over 4-6 months.  A thyroid test is also important, as abnormality in thyroid hormone secretion can be a cause for abnormal bleeding. Beyond this hysteroscopy, (endoscopic evaluation) of the uterine cavity or a D&C may be needed to reach a diagnosis. Sometimes a laparoscopy is needed to rule out other causes.

Treatment for abnormal bleeding will depend on many factors, including the cause, age, the severity of the bleeding, and whether one desires to have any future pregnancies. It can be treated with hormones or other medications, or surgery may be needed. It takes a few cycles to understand if the medications are working. The first line of treatment is non-hormonal medications that help to reduce pain and bleeding when taken during the periods. If it helps you may need to take them during periods for a few cycles. Hormones are other medications that maybe needed if there is a suggestion of hormonal imbalance of deficiency. Progesterone (one type of hormone) can help prevent and treat endometrial hyperplasia. It may take a few months for hormones to control the bleeding. Your periods may be heavier for the first few months. However, they will lighten over time.

Few women with abnormal uterine bleeding may require surgical treatment to remove growths (like fibroids or polyps) that are causing the bleeding. Often, this can be done with hysteroscopy. However, sometimes another surgery is required. Endometrial ablation also is used to treat abnormal uterine bleeding. This treatment uses heat to destroy the lining of the uterus. It is meant to reduce or stop bleeding permanently. An endometrial biopsy is needed before treatment. A woman may not be able to get pregnant after ablation.

Hysterectomy, removal of the uterus, is another procedure that can be used for the treatment of abnormal bleeding. This may be done when other forms of treatments have failed or are not an option. Hysterectomy is major surgery. Following this procedure, women will no longer have periods. She also will not be able to get pregnant.

If you notice irregular cycles, it is better to check with a gynecologist. Abnormal bleeding has a number of causes. There is no way to know why your bleeding is abnormal until gynecologist makes an assessment of your condition. Once the cause is found, abnormal bleeding often can be treated with success.