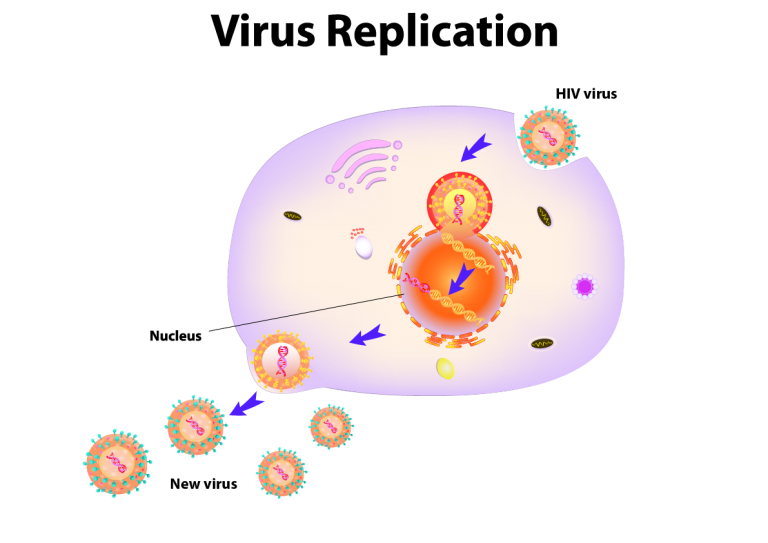 Acquired Immuno Deficiency Syndrome (AIDS) is a disease caused by human immunodeficiency virus (HIV). HIV damages the immune system and decreases the ability of your body to fight against infections and diseases.

In the early 1980s, doctors described unusual infections and cancers among gay men. These men developed unusual pneumonia caused by Pneumocystis carinii and cancers like Kaposi sarcoma and died due to a severe deficiency in their body’s immune defenses. By September 1982, CDC had named this condition as AIDS or acquired immune deficiency syndrome and proposed that it causes a defect in the cell-mediated immunity of the body. Later, the disease was also shown to affect intravenous drug abusers and patients suffering from hemophilia. In 1984, the human immunodeficiency virus was discovered as the cause of AIDS by scientists Luc Montagnier and Robert Gallo.

Clinically, HIV infection progresses through 3 stages, namely, acute primary infection, stage of clinical latency and AIDS. Throughout these stages, the immunity of the individual progressively decreases, and the number of immune cells present reduces.

When the immunity of the individual infected with HIV becomes extremely weak, specific immune cells in his body known as CD4 cells decrease below 200 cells/mm3, and he develops AIDS. AIDS is the most serious phase of HIV infection. In this phase, the patient suffers AIDS symptoms like severe, life-threatening infections, cancers and neurological complications of AIDS.

HIV infection is diagnosed by testing for antibodies against HIV in the blood of the patient. A few tests which detect the presence of viral DNA and CD4 cell counts are used to guide AIDS treatment.

According to worldwide the statistics published by the World Health Organisation, by the end of 2016, 36.7 million people were infected with HIV. Additionally, 1.6 million deaths occurred due to causes related to AIDS. The African continent has the highest number of people affected. Currently, AIDS is described as a pandemic, a disease which has spread across continents. People in developing countries are most affected, as HIV infection increases the chances of acquiring infections like tuberculosis and dying due to AIDS-related complications.

AIDS also affects the economy of the country because a majority of the individuals affected are in the productive age group. Studies have reported that ninety-five percent of individuals with HIV infection live in developing countries. Poverty, the presence of other severe illnesses, unavailability of appropriate medical care and ignorance aggravates the burden of AIDS in these nations.

Due to the modes of transmission, individuals who are at risk of developing AIDS or HIV infection are

AIDS is caused by the human immunodeficiency virus (HIV). These viruses are called retroviruses and belong to a genus called Lentivirus. There are two types of HIV: HIV-1and HIV-2.

HIV-1 is the most common virus present worldwide. It accounts for 95% of all the infections. HIV-1 has several subgroups, M, N, O, and P. Among these, subgroup M is the most widely prevalent.

HIV- 2 is less commonly prevalent. It has been reported from Western Africa, European countries like Portugal and France and India. It causes disease which progresses slower than that caused by HIV-1.

These viruses are transmitted by any of the following routes

When these viruses enter the human body, they attach to immune cells called as CD4 T-cells. The virus has certain spikes called glycoproteins on its surface which interact with receptors on the surface of CD4 T-cells. CD4 T-cells are a type of white blood cells, which play an important role in the immune system. They attack harmful microorganisms and protect us from infections and disease.

The attached viruses enter into the CD4 cells and multiply within these cells. These cells become damaged by the multiplying virus. Therefore, the number of CD4 T-cells progressively decline to result in weakening of the immune system.

The immune system also protects the body against cancers by eliminating mutated cells which can multiply indefinitely. The defense against cancer is also weakened in AIDS, and the patient suffers from several cancers.

The virus can also enter the brain very early on in the infection and multiply within the immune cells in the brain. These immune cells, the macrophages and monocytes of the brain, act as reservoirs for HIV infection and can cause progressive neurological damage.

In the initial stages, infection with HIV may not show any symptoms. As the immunity of the body progressively declines, symptoms of HIV infection begin to appear. It takes several years for the progression of the disease from initial infection to full-blown AIDS.

Acute primary infection is the earliest stage of HIV infection. It usually develops within 2 to 4 weeks after the person is infected with HIV. During this stage, the virus multiplies rapidly and spreads throughout the body. The risk of spreading the disease is highest during this stage. Individuals may experience flu-like symptoms such as fever, headache, and rash during this stage.

Stage of clinical latency is the second stage of HIV infection. It is also called as asymptomatic HIV infection or chronic HIV infection. In this stage, the virus continues to multiply slowly, but the patient does not have any specific signs or symptoms. Some individuals may have persistent swelling of their lymph nodes. If no proper treatment is received during this stage, the infection may progress to AIDS. This stage may last up to 10 years in patients not receiving any treatment.

AIDS is the most severe stage of HIV infection. During this stage, the immune system is severely damaged. An HIV positive person is said to have AIDS when he or she has an AIDS-defining illness or a CD4 cell count less than 200 cells/mm3.

An AIDS-defining illness is a critical illness that occurs in HIV infected individuals. A significant drop in the immune cells that defend the body against infections and cancers occur in this stage. These may be opportunistic infections or cancers that occur due to reduced immunity.

Opportunistic infections are those infections that occur at a higher frequency in patients with the defective immune system.

Certain cancers also occur at a high frequency among individuals with AIDS. These include

AIDS dementia complex is a group of neurological complications of AIDS. It results in mental changes like confusion, forgetfulness and changes in physical activity like abnormalities of walking.

If no proper treatment is received during this stage, the patients typically survive for not more than 3 years.

Lack of adequate knowledge about HIV and its modes of transmission is the primary factor that increases the chances of exposure to HIV. Infection with HIV can occur in any individual regardless of their sexual orientation, race, gender, occupation or social status. However, certain practices and lifestyle behaviors may increase the likelihood of acquiring HIV infection. These practices are called as risk factors because they increase the risk of HIV infection.

The risk of AIDS is very high in an individual who has multiple sex partners as it increases the probability of having intercourse with an infected individual. Monogamous relationship with an uninfected individual protects you from acquiring HIV infection.

Unsafe injection practices involve using the same syringe, needle or injection vial for several individuals, re-using single-use syringes, and improper disposal of used needles and sharp instruments. According to World Health Organization (WHO), nearly 5% of HIV infections took place due to unsafe injection practices. Using contaminated syringes and needles increase the risk of transmission of HIV from an infected person to a healthy individual.

On the contrary, HIV is not spread through the following methods

Serological tests are the most common methods to diagnose HIV infection. In this test, the pathologist looks for the presence of antibodies to the virus in the infected person’s blood. It is important to undergo early testing if you have been exposed to HIV.

The antibodies to HIV usually develop 3 to 12 weeks after exposure to the virus. Early testing helps the affected individual to seek proper treatment and minimize the risk of transmission of HIV to healthy individuals by avoiding high-risk behaviors.

HIV card tests are used for quick detection of the antibodies in the blood. These are rapid and give results within 20 minutes. They are easy to perform and can be used in field situations.

HIV- Chemiluminescent assay is a variation HIV-ELISA and is performed using automated instruments. These tests are highly sensitive and use the principle of chemiluminescence.

It is a blood test used to detect multiple HIV antibodies in the blood. The procedure for the western blot test requires a strip containing a series of proteins on a specialized blotting paper. The blood sample is made to react with the paper strip. An enzyme is used to cause color change and detect antibodies. If the person is HIV infected, several colored bands appear on a strip.

It is used to monitor the treatment progress or detect early HIV infection. It measures the amount of HIV present in your blood. It can be done using methods that detect the genetic material of the virus. These include reverse transcription-polymerase chain reaction (PCR), branched DNA assay (bDNA) and nucleic acid sequence-based amplification assays (NASBA).

Window period of HIV is the period that immediately follows the initial infection with HIV during which the infection is not detected by the tests used. During the window period, the patient is highly infected but the tests for HIV are negative. Most people develop antibodies to HIV between 3 to 12 weeks of infection. For fourth-generation ELISA, the window period is usually 4 weeks. Viral load tests may detect HIV nucleic acid by an average of 14 days. Due to the window period, if the test for HIV is initially negative following exposure, the test must be repeated after 2-3 months.

Individuals who are infected with HIV have to take combinations of several anti-retroviral medications. A minimum of three drugs belonging to different classes is used. These combinations are called HAART or highly active antiretroviral therapy.

These drugs may also be used to prevent the transmission of HIV infection from an infected pregnant mother to the baby. For this reason, the WHO advises all pregnant women to be tested for HIV.  Additionally, ART is also used to reduce the chances of HIV infection in healthcare workers following an accidental prick with an infected needle.

Common side effects associated with Anti-HIV medications are

Other complications associated with anti-HIV drugs are

Anti-HIV medications can interact with others. These drug interactions can cause unwanted effects on your body so inform your physician if you are taking any other medications.

Sometimes HIV undergoes mutation while multiplying in the body and develops resistance to the medications. In such condition, the HIV medications which previously controlled HIV may not be effective and the person may need new drugs to control the propagation of HIV in the body. Poor patient adherence to HIV medications also increases the risk of drug resistance and causes treatment failure.

There is no vaccine against HIV infection. You can minimize the chances of acquiring HIV infection or AIDS by following these suggestions: