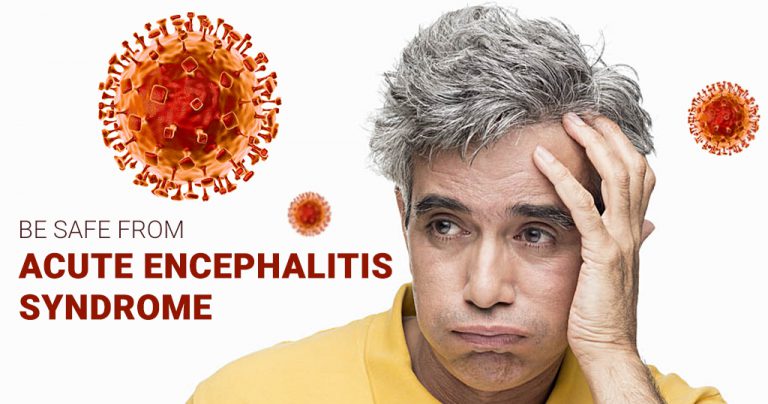 What is Acute Encephalitis Syndrome (AES)?

AES (Acute Encephalitis Syndrome) is a critical public health concern in India. Also known as  ‘Chamki Fever’ or Litchi Virus, AES is a health condition that mainly affects young adults and children and causes inflammation, irritation, or swelling of the brain. Most importantly, it can lead to a significant number of deaths.

The chief cause of acute encephalitis syndrome in India is the Japanese Encephalitis Virus (JEV). Besides, Influenza A virus, Herpes simplex virus, Parvovirus B4, dengue, Epstein-Barr virus, Chandipura virus, S. pneumoniae, etc., are responsible for the sporadic spread of the disease in the country.

The first case of JEV-induced AES was recorded in India in 1955 in Tamil Nadu (formerly called the State of Madras). According to the National Vector Borne Diseases Control Program (NVBDCP), over 10,400 cases of AES and more than 630 deaths were recorded from seventeen states in India in 2018. Jharkhand, Bihar, Assam, Karnataka, Uttar Pradesh, Tripura, Meghalaya, Manipur, and Tamil Nadu add to the maximum number of cases.

What are the Causes of AES?

What is Encephalitis Syndrome?

Encephalitis is a severe health condition in which the active tissues of the brain are inflamed due to an autoimmune response or an infection. As a result of the inflammation, the brain swells. It may lead to headaches, delirium, stiffness in the neck, light sensitivity, seizures, and confusion.

Encephalitis affects around 10 to 15 persons in 100,000 every year. Also, over 250,000 people have been diagnosed with this condition in the last 10 years in the USA alone. Although encephalitis can affect anyone, young people are more prone to this condition.

What is the Link Between AES and Litchi Fruit?

The logic behind the link between Litchi fruit consumption and AES is that when children eat large amounts of unripe litchi fruits (on an empty stomach), it may lead to hypoglycemic encephalopathy, a brain injury that causes prolonged or severe hypoglycemia or low blood sugar. Unripe litchi has the toxins hypoglycin A and methylene cyclopropyl glycine (MCPG) that causes vomiting if ingested in large quantities. An India-U.S. team confirmed the role of the toxin MCPG in 2017.

However, while linking litchi fruit to AES (Litchi Virus) deaths (owing to the presence of infectious organism) is well documented, this alone cannot be attributed as the main cause of death. Recent findings by specialists have narrowed down reasons for Encephalitis Syndrome to multiple other factors like humidity, malnutrition, heat, and poor hygiene.

When it comes to acute encephalitis syndrome (AES) in India, viruses are considered the chief cause for the same. Other causative organisms, including parasites, fungus, bacteria, spirochetes, toxins, and harmful chemicals, have also been recorded over a couple of decades.

The major cause of acute encephalitis syndrome in India is the Japanese encephalitis virus (JEV). Besides, Influenza A virus, Herpes simplex virus, Parvovirus B4, dengue, Epstein-Barr virus, Chandipura virus, S. pneumoniae, among others, are responsible for the sporadic spread of the disease in India.

The first case of JEV-induced AES was recorded in India in 1955 in Tamil Nadu (then Madras). As per the National Vector Borne Diseases Control Programme (NVBDCP), in 2018, over 10,400 cases of AES and more than 630 deaths were recorded from seventeen states of India.

What are the Symptoms of AES?

The signs and symptoms typically include:

AES complications may include memory loss, coma, and even death.

How will Your Doctor Diagnose AES?

Your doctor is likely to perform a physical and medical diagnosis and recommend the following tests:

What are the Treatment Options for AES?

What are the Possible Complications of AES?

Inflammation in the brain tissues is likely to damage the brain. And it might lead to coma, and in the worst-case scenario, death. Other complications may include the following:

How can AES be Prevented?

AES or Litchi Virus can be prevented by:

How does acute encephalitis spread?

The mode of transmission of AES varies, depending on the causes. Some causes are:

The bacteria that cause encephalitis include the following:

Encephalitis means inflammation of the brain tissues. It leads to various signs and symptoms, including headache, fever, seizures, muscle weakness, etc. When the onset of these symptoms is acute, it is known as acute encephalitis syndrome.