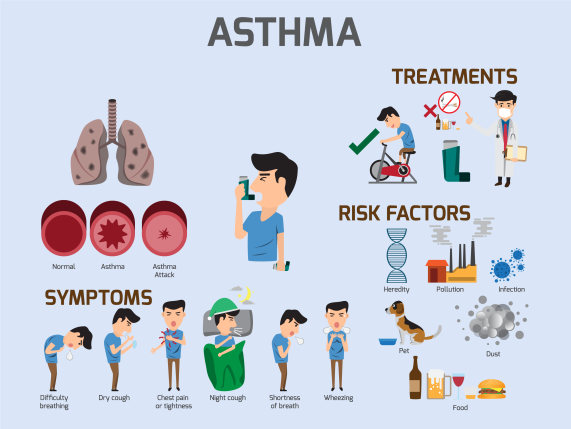 Asthma is a condition in which the airways become narrow and produce extra mucus. Due to this, it becomes difficult to breathe and the person has wheezing, coughing and shortness of breath. In some individuals, asthma occurs as a minor disease. In others, it becomes a major problem which interferes with daily activities and can lead to a life-threatening asthma attack. Asthma is not curable, but its symptoms can be controlled.

Normally, when the person breathes, air goes through the nose and fills the lungs. There are very small air passages in the lungs which help deliver oxygen from the air to the bloodstream. When the lining of air passages swell with mucus, the muscles tighten and asthma symptoms occur. The mucus gets collected in the airways decreasing the passage of air. This lead to the coughing and tightness in the chest that is typical of an asthma attack.

The signs and symptoms of asthma are

The risk factors that increase the chances of asthma are as follows:

History and physical examination are very important in diagnosing asthma. The person usually has a history of allergic rhinitis or other allergic conditions, wheezing, coughing and difficulty breathing, with exercise or during the night. There may also be a tendency toward respiratory infections or bronchitis. Typically improvement with medications is suggestive of asthma.

Diagnostic procedures which are used in the diagnosis of asthma are:

The goals for treating asthma are

Asthma medications that are used most commonly include the following

The patient is referred to a pulmonologist

Dealing with Malaria during Covid-19 Pandemic