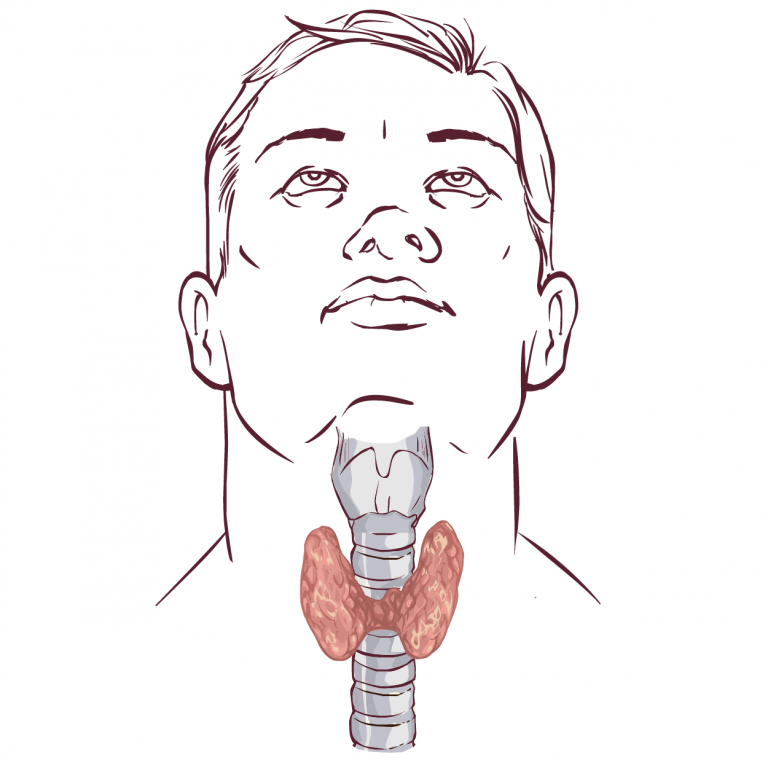 The most biologically active form of hormone is T3. Once T4 is released into the blood from the thyroid gland, T4 is converted into T3, & this active hormone affects the metabolism of cells. When thyroid hormone production slows down, the body’s processes also slow down & change. Hypothyroidism will affect various systems of the body.

Hypothyroidism or underactive thyroid is a condition in which the thyroid gland will not produce enough of thyroid hormones. Women, above 60 years of age, usually end up with hypothyroidism. Hypothyroidism causes an imbalance of chemical reactions in the body. If enough thyroid hormone is not produced in the bloodstream, the body’s metabolism slows down. Typical signs of an underactive thyroid are tiredness, weight gain & a feeling of depression. In the early stages, its symptoms are rare, but if left untreated, hypothyroidism leads to a number of health-related problems like heart disease, obesity, joint pain, infertility. It is a quite common condition affecting all age groups & races. However, women, especially older women are more prone to develop hypothyroidism than men.

The common causes of hypothyroidism are

An inherited condition known as Hashimoto’s thyroiditis is the most common cause of hypothyroidism. Dr. Hakaru Hashimoto described this condition in 1912 & is therefore named after him. In Hashimoto’s thyroiditis, the thyroid gland is enlarged goiter and the ability to make thyroid hormones is reduced.  Hashimoto’s is an autoimmune disease in which the body’s immune system attacks the thyroid tissue. This condition is genetic & runs in families. Women are 5 to 10 times more affected when compared to men. The antibodies to the enzyme, thyroid peroxidase (anti-TPO antibodies) are increased in this condition.

Inflammation of the thyroid gland is known as thyroiditis. As the inflammation is caused by a lymphocyte, a type of WBC cells, the condition is known as lymphocytic thyroiditis. It affects 8% of women after their delivery. In these patients, first, the hyperthyroid phase where excessive amounts of thyroid hormone are produced by the inflamed gland, followed by a hypothyroid phase that lasts up to six months. Most of the women return to normal state of normal thyroid function, but some remain in the hypothyroid state.

When hyperthyroid condition (such as Graves’ disease) patients receive radioactive iodine, they have very little of functional thyroid tissue after treatment.

If for some reason the pituitary gland or the hypothalamus are unable to signal the thyroid & instruct it to produce thyroid hormones, a decreased level of circulating T4 & T3 may result, even if the thyroid gland itself is normal. If this defect is caused by pituitary disease, the condition is called “secondary hypothyroidism.” If the defect is due to hypothalamic disease, it is called “tertiary hypothyroidism.”

Medications which are used to treat an overactive thyroid may cause hypothyroidism. These drugs are Methimazole (Tapazole) & Propylthiouracil (PTU). The psychiatric medication, lithium (Eskalith, Lithobid), is also known to alter thyroid function & cause hypothyroidism. Interestingly, drugs containing a significant amount of iodine such as amiodarone (Cordarone), potassium iodide (SSKI, Pima), & Lugol’s solution can cause changes in thyroid function, which may result in low blood levels of thyroid hormone.

Signs & symptoms may include:

When hypothyroidism is not treated, signs & symptoms can gradually become more severe. Constant stimulation of the thyroid gland to release more hormones may lead to an enlarged thyroid (goiter). Also, the person may become more forgetful, thought processes may become slow, or a feeling of depression might arise.

Advanced hypothyroidism, also known as myxedema, is rare, but when it occurs, it can be life-threatening. Signs & symptoms include low blood pressure, decreased breathing, decreased body temperature, unresponsiveness & even coma. In extreme cases, myxedema can be fatal.

Although hypothyroidism most often affects middle-aged & older women, anyone can develop the condition, including infants. Initially, babies born without a thyroid gland or with a gland that doesn’t work properly may have few signs & symptoms. When newborns do have problems with hypothyroidism, they display the following issues:

As the disease progresses, infants are likely to have trouble feeding & may fail to grow & develop normally. They may also have:

When hypothyroidism in infants is not treated, even mild cases can lead to severe physical & intellectual disabilities.

In general, children & teens who develop hypothyroidism have the same signs & symptoms as adults do, but they may also experience:

Hypothyroidism can affect anyone, but increased risk is observed in:

Hypothyroidism can be suspected in patients with fatigue, cold intolerance, constipation & dry, flaky skin. A blood test is needed to confirm the diagnosis.

However, an exception exists. If the decrease in thyroid hormone is actually due to a defect of the pituitary or hypothalamus, then the levels of TSH are abnormally low. As noted above, this kind of thyroid disease is known as “secondary” or “tertiary” hypothyroidism. A special test, known as the TRH test, can help distinguish if the disease is caused by a defect in the pituitary or the hypothalamus. This test requires an injection of the TRH hormone & is done by an endocrinologist (hormone specialist).

The blood work mentioned above confirms the diagnosis of hypothyroidism but does not point to an underlying cause. A combination of the patient’s clinical history, antibody screening & a thyroid scan can help diagnose underlying thyroid problem more precisely. If a pituitary or hypothalamic cause is suspected, an MRI of the brain & other studies may be done.

Initially, the patient will have regular blood tests to adjust the correct dose of levothyroxine. The patient is started with a low dose of levothyroxine, which would be increased gradually, depending on the patient’s body response. Some people begin to feel healthy soon after the beginning of treatment, while others do not notice an improvement in their symptoms for several months.

Once the patient takes the correct dose, he/she usually will have a blood test once a year to monitor the hormone levels.

If blood tests suggest an underactive thyroid, but no symptoms are noted, or only mild symptoms are seen, the patient may not need any treatment. In these cases, the general physician will usually investigate the hormone levels for every few months & prescribe levothyroxine if the patient develops symptoms.

If the patient has prescribed levothyroxine, one tablet at the same time every day is usually taken. The patient usually takes the tablets in the morning, although some people prefer to take them at night.

The effectiveness of the tablets can be altered by other medications, supplements or foods, so they should be swallowed with water on an empty stomach, & should avoid eating for 30 minutes afterward. If the patient skips taking a dose, the dose should be taken as soon as the patient remembers.

An underactive thyroid is a lifelong condition, so the patient usually needs to take levothyroxine for the rest of the life.

Levothyroxine does not usually have any side effects because the tablets simply replace a missing hormone.

Side effects usually occur if the patient is taking too much levothyroxine. It can cause problems including headaches, sweating, chest pain, vomitings & diarrhea.

In most cases, suppressing thyroid-stimulating hormone (TSH) using high dose thyroid replacement therapy should be avoided because it carries a risk of causing adverse side effects, such as atrial fibrillation (irregular and abnormally fast heart rate), strokes, osteoporosis, & fracture.

However, this type of treatment may sometimes be suggested in cases where a person has a history of thyroid cancer & there’s a significant risk of it reoccurring.

It is necessary to treat an underactive thyroid before pregnancy. If the patient is pregnant or trying to become pregnant & have hypothyroidism. They may refer to a specialist for treatment & monitoring during the pregnancy.