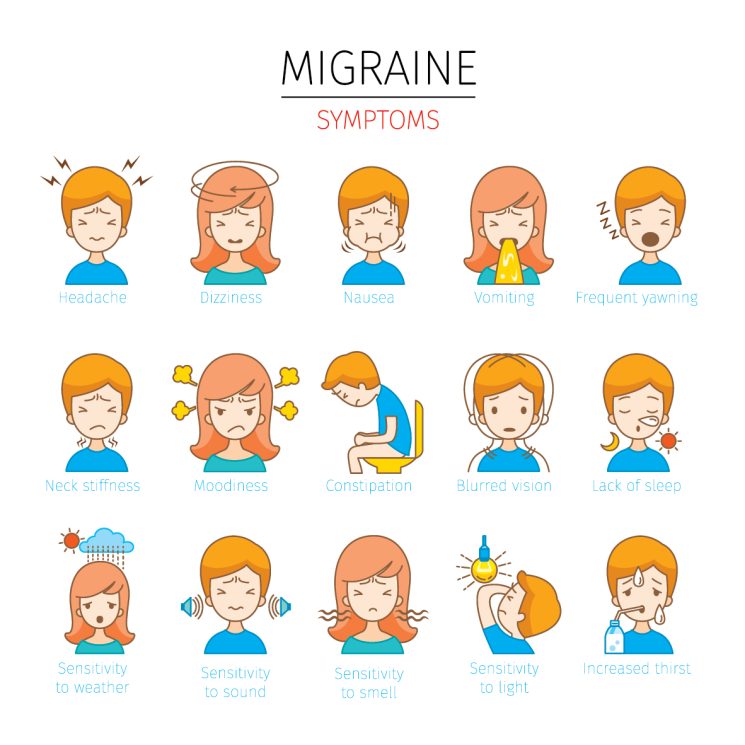 A migraine is a neurological condition or disorder which is characterized by severe headaches accompanied by symptoms like nausea and vomiting, speaking difficulties, numbness or tingling, light and sound sensitivity.  Migraines could be genetic and can affect people of almost all ages. In young children, migraine goes undiagnosed as it is misunderstood to be a common headache or weakness.

The duration of migraine varies between individuals. Most of the attacks last for a minimum of 4 hours. If an attack of a migraine lasts longer than three days, it has to be treated in a hospital setting.

Migraine headaches can include a wide range of debilitating neurological symptoms. A headache usually occurs on one side of the head and is typically throbbing in nature.

The Most Common Types of Migraine

Migraine aura without headache: The symptoms of aura occur but the person does not develop headache. This is also known as a silent migraine.

The characteristic symptoms of migraine without aura are

2) At least one symptom from the following –

Migraine pain is usually described as

Migraine pain mostly affects the forehead area. It is usually on one side but can occur on both sides or shift from one side to another.

While people suffering from migraine may experience the attack frequently, up to several times in a week, there are some cases where an occasional experience of a migraine attack is experienced. At times, it could take up a gap of a few years for one to experience a migraine again. Migraine is widely addressed by neurologists and specialists who come from a variety of backgrounds.

Migraines could affect the quality of life and stop one from carrying out normal daily activities.

The causes of migraine may vary from person to person.

Genetics and environmental factors play a major role in the cause of migraine.

Migraine could be caused by changes in the brainstem and the trigeminal nerve, which is the major pathway for pain.

An imbalance of chemical in the brain like serotonin could also be the cause of a migraine. Serotonin helps regulate pain in the nervous system. The role of serotonin in migraine is still being studied by researchers. In a migraine attack, there is a drop in the level of serotonin, causing the trigeminal nerves to release substances called neuropeptides, which travel to the outer covering of the brain or the meninges. The results in headaches.

Certain substances and habits are known to make an individual more vulnerable to migraines. The common factors that trigger migraines are as follows:

Symptoms of migraine and its severity can vary from person to person. A throbbing headache is the most common symptom of a migraine attack. This usually occurs on one side. Alongside headache, a person may experience one or more of the following symptoms –

Throbbing/pulsating pain and sensitivity to light are the two most common symptoms. A typical migraine attack progresses through four stages and symptoms of the attack vary from stage to stage.

Four stages of migraine attack are as follows

In the aura phase of a migraine, varied symptoms occur which include sensitivity to touch/feel, difficulty to talk, auditory or olfactory hallucinations (hearing or smelling things that are not there), paralysis of a side of the body, dizziness, vertigo and paraesthesias. About 5 % of the general population experiences migraine with aura. Not every migraine attack comes with an aura. Among those that suffer from migraine, about 19% tend to experience an aura with every attack.

The headache phase of migraine is characterized by headache occurring on one side of the head. The pain is made worse by physical activity and lasts for four or more hours.

Postdrome or the last phase of migraine can lead to a feeling of “hungover” and is usually characterized by symptoms like fatigue, mood swings, difficulty to concentrate, etc.

Individuals who suffer from migraine are advised to maintain a journal of symptoms experienced during each attack and the activity they were doing just before the attack started. It is important to note the duration of pain as well. Writing the symptoms down each time will give the patient an idea of the pattern of pain being experienced and also what activities he/she must refrain from in order to prevent migraine attacks in the future.

Migraines can occur due to several factors. Some of the factors associated with migraine include:

A doctor diagnoses a migraine in a person by analyzing the symptoms. Tests may be done to detect unusual, complex or severe conditions. The doctor might recommend the following tests.

Treatment of migraine is required to relieve the symptoms and prevent attacks in the future. The medications that are used to treat migraine are classified into two broad categories:

Preventive medications are drugs that have to be taken regularly to reduce the severity or frequency of migraine attacks. Preventive medication is recommended if a patient suffers from four or more debilitating attacks in a month and if the attacks last longer than 12 hours.

The most common preventive medications for a migraine include:

The treatment strategy depends on the frequency of a headache and its severity. It also depends upon the degree of disability caused by the attack and other underlying health conditions of the patient.

Treatment varies in certain conditions like pregnancy and breastfeeding. The doctor should be informed of such conditions, as some medicines aren’t recommended during these stages.

Identifying the pattern of migraine is a good way to prevent its repetition. Maintaining a journal of activities and keeping a track of symptoms that are experienced each time will help an individual understand the triggers of a migraine attack. Abstaining from such tasks will eventually help the individual to prevent attacks in the future.

Apart from this, the following lifestyle modifications may help prevent migraines

Apart from these, daily use of medications and being stress-free are effective tips in the prevention of migraine. Apart from medications prescribed by the doctor, hot packs and heating pads can help relax tense muscles. Having a warm bath can also soothe a migraine attack.

Migraine is a chronic condition which can be effectively controlled by treatment measures.

What are the Treatment Measures for Migraines?

Medications prescribed by the doctor and preventive measures can help treat migraine.

Why do I get a Migraine Pain When I Wake Up?

A migraine is often triggered when you miss meals or delay them. If you are experiencing migraine attacks every morning you wake, you might have to add a short meal just before you go to bed so that you do not stay long on an empty stomach.

Apollo Hospitals has the Best Neurologist in India. To find the best Neurologist doctors in your nearby city, visit the links below:
www.askapollo.com/physical-appointment/neurologist