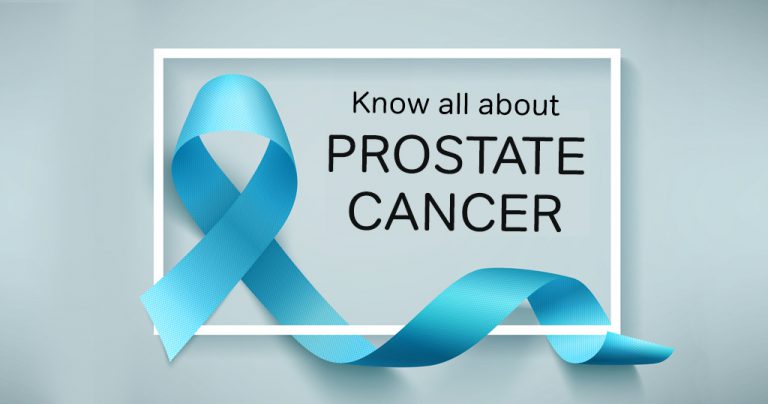 You may have heard about prostate glands, Prostate Specific Antigen (PSA) tests and screening guidelines without giving them much thought. When it comes to prostate cancer prevention, it is time to do more than just listen.

Prostate cancer is one of the highest prevalent cancers in India. While it typically affects men over 65 years, however, of late, there have been reports of an increasing number of younger men (between the age group of 35 – 44 and 55-64) residing in metropolitan cities suffering from prostate cancer. In the initial stages, Prostate cancer often goes unnoticed as symptoms may include burning sensation during urination, increased frequency of urination and difficulty in passing urine.

What is a Prostate Gland?

The prostate is a walnut-shaped, exocrine gland( Glands which produce secretions) in men located at the base of the bladder. It is a part of the male reproductive system. The prostate produces fluid that nourishes and moves sperms on their journey to fuse with a female egg, to beget human life. It is the prostate that contracts and forces the semen out during orgasm.

In addition, urethra, a tube through which urine and sperm exit the body, also passes through the prostate gland (the median lobe). Therefore, an enlarged prostate (because of benign or malignant changes) affects the flow of urine.  It can constrict and limit the flow of urine through the urethra (as it passes through the median lobe and median and lateral lobes of the Prostate are most affected by benign/ malignant changes in the gland) because of physical effects.

The prostate is an exocrine gland, which means its fluids and secretions are for use outside our body. The prostate, prostate-specific antigen (PSA) excretes protein that helps semen in retaining its liquid state. Surplus of this protein in the blood is the first signs of prostate cancer. Prostate cancer usually develops very slowly and, although not lethal in most patients, a small percentage of prostate cancers are very aggressive.

The disease usually does not produce symptoms in the early stages when it is most treatable. By the time symptoms, like pain when urinating occur, the cancer is likely to have advanced, demonstrating the following symptoms:

Currently, the primary screening tool is the prostate-specific antigen (PSA) test, which measures blood levels of a protein produced by the prostate gland. Elevated PSA levels do not necessarily mean cancer; this warrants further investigations. These investigations may include:

If these diagnostic tests show abnormal results, additional tests may include:

To track metastasis (spread of cancer), doctors use a CT scan, bone or MRI scan.

PSA levels as well as a digital rectal examination (DRE) to check for prostate tumours.

If PSA levels increase or a lump can be diagnosed, your doctor will most likely recommend imaging tests and/or a biopsy to diagnose and stage the disease. If the presence of prostate cancer is confirmed, your doctor may recommend continued surveillance, or one of the many precisely targeted treatment methods available:

Early diagnosis and treatment is the key to conquering any cancer and Prostate cancer is no exception. If prostate cancer is diagnosed before it spreads to other organs (called metastasis), the 5-year survival rate can be as high as 99 per cent. The same, after fifteen years, reduces to 96 per cent. And, if the cancer spreads (or metastasizes), the 5-year survival rate is just 29 per cent.

Regular screening can help detect prostate cancer early – when it can be treated without major morbidity. If you are a man, and above 45 years, discuss your risk for the disease with your doctor and decide on screening.