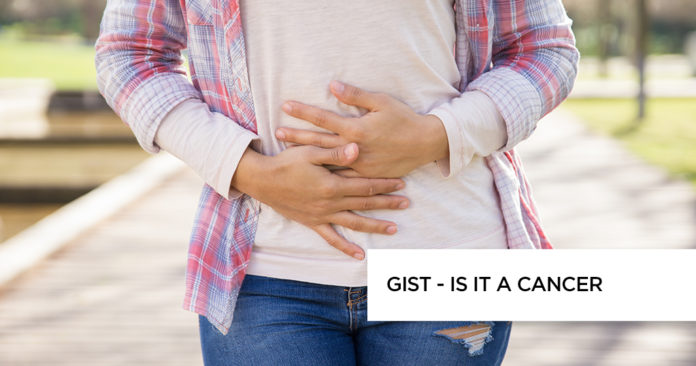 Gastrointestinal Stromal Tumors (GISTs) are tumours of the variety known as soft tissue sarcomas, arising from the cells of the autonomous nervous system in walls of the gastrointestinal tract (GI tract. Most GISTs do not show any symptoms for a long time and are usually small in size. In rare cases, the tumors grow rapidly and may require surgery. It is common in people in the age group of 50-70 to develop GISTs.

What are GISTs and where can they be found?

Gastrointestinal Stromal Tumors or GISTs are tumors located in the digestive system. Commonly found in the stomach or the small intestine, GIST start off being tiny in size. In some cases, a GIST grows slowly. Others grow and spread rapidly.

These tumours arise from the special cells – interstitial cells of Cajal (ICCs) – present in the wall of the GI tract. More than 50 percent of the GISTs start in the stomach. A small number of GISTs are located outside the GI tract in areas such as the peritoneum – a thin layer covering the organs and walls of the abdomen.

Any individual can develop a GIST. However, it is more common in individuals between the ages of 50 and 70. In most of the cases, a GIST never develops before the age of 40. In extremely rare cases, a mutation in an inherited gene can cause a GIST.

What are the symptoms of GIST?

Symptoms and signs of GISTs may show up completely differently in every individual. The symptoms will occur depending on the size and location of the GIST in your stomach. Here are some of the possible symptoms:

The anemia is usually caused by the tumor that slowly starts to bleed in your abdomen. Sometimes, you may also feel the growth in your stomach.

What are the risk factors associated with GIST?

Most cases of GIST tumors develop without any possible reason. It is very rare for a doctor to find out what caused it. The following factors may increase your risk of developing a GIST:

● Gender: Men are more prone to developing GISTs than women.

● Age: Commonly found in people age above 50. It can occur in any individual, but it is rare for a person below the age of 40 to develop GISTs.

● Genetics: GIST can be familial or sporadic. People suffering from familial GIST may experience several GISTs at the time of diagnosis. Tumours appear most often in the small intestine and stomach in familial GIST,. Often, the tumours are diagnosed between the age of 25 and 45.

In contrast, the age when sporadic GIST (or the non-inherited GIST) tends to develop is typically after 50 years of age. All GISTs can potentially become cancerous and spread to other parts of the body. However, tumours caused by familial GIST may spread elsewhere less often compared to sporadic GIST.

As of yet, no preventable or non-genetic risk factors have been found, which means there is no way you can prevent GISTs.

How is GIST diagnosed?

Upon studying your symptoms carefully, the doctor will conduct tests to find out if it is a GIST. The following are some of the tests that are conducted to diagnose a GIST:

The doctor will give you a liquid to swallow. You may receive an injection of a similar substance as well. Then a scanner takes numerous X-rays as it moves over your abdomen.The scanner will take several X-rays of your stomach and intestine to find out the size and location of the tumor.

The physician inspects the inner lining of the esophagus, stomach including the first part of the small intestine with an endoscope (a flexible, lighted tube) that is passed down through the mouth. It may also be possible to take small samples of abnormal tissue during an upper endoscopy.

This test combines endoscopy with an ultrasound. The sound waves from the probe will create echoes in your stomach. As the echoes bounce back, the computer will translate them into images . This will help in showing the position of the tumor in your stomach.

The endoscopic ultrasound is also helpful in finding out the depth of the tumor with the stomach walls.

This is one of the tests that will determine for sure whether you have GIST or not. A small sample of the tumor will be collected and tested.

A Positron Emission Tomography, also known as a PET scan, uses radiation to show activity within the body on a cellular level. A radiotracer is injected into your body, where it travels to cells that use glucose for energy. Compared with normal cells, cancer cells are very active in using glucose, so a radiotracer made with glucose will light up areas of cancer.

What are the treatment options for GIST?

The doctor will come up with a treatment plan based on your symptoms, diagnosis, and severity of the GIST. The following are some of the treatment options that your doctor might recommend:

This is the most common treatment option for GISTs. It is usually used for treating small-sized GISTs. Large tumors are often shrunk using medications before removing it surgically.

These treatments work by blocking certain abnormalities that are present inside the cancer cells. It helps in killing the cancer cells using the drugs. The enzyme that helps cancer cells grow in GISTs is a tyrosine kinase. The drug therapy will aim at killing this enzyme to stop the growth of cancer cells and eventually eliminating it.

To prevent the GIST from recurring after surgery, the first-line targeted therapy used is Imatinib (Gleevec). It is also effective in shrinking large tumors before resecting them surgically. As long as the drug is effective, the treatment goes on.

In cases where Imatinib doesn’t work, other drugs such as Regorafenib (Stivarga) and Sunitinib (Sutent) may be recommended to target the tyrosine kinase enzyme.

One can define a GIST as a type of cancer that grows in the gastrointestinal (GI) tract, also called the digestive tract. Gastrointestinal Stromal Tumor is commonly found in the stomach and small intestine.

2. What is the survival rate for GIST cancer?

The cure of GIST depends on several factors such as the severity of cancer and how far it has spread. Small-sized cancer is often treatable. For large cancer that overgrows, it is first shrunk using medications and then treated.

The exact causes of GIST are not known yet. Some of the factors that increase the risk of developing GIST are age, gender, and genetics. GIST is common in people above the age of 50 years. Though it may happen to anyone, it is highly unlikely in people below the age of 40 years.

Facebook
Twitter
WhatsApp
Linkedin
Previous articleOutwit Poison Ivy: Is It Communicable?
Next articleIs It Possible to Have Sexual Intercourse if You Have Peyronie’s Disease?

With increasing age, our body becomes prone to various diseases and disabilities. One of the most common disorders in the human body occurs in...
Read more
Health A-Z

Erectile Dysfunction (ED) is the medical condition where a man cannot achieve and maintain an erection for sexual intercourse. Multiple factors can lead to...
Read more

Erectile Dysfunction (ED) is the medical condition where a man cannot achieve and maintain an erection for sexual intercourse. Multiple factors can lead to...
Read more
Load more
×

Rule Out Heart Palpitations Before They Lead to Other Cardiac Complications

5 Signs of Breast Cancer that Should Cause Concern

It’s generally called the “C” word; a word that spells alarm in everyone. In the case of women, breast cancer has been...
Read more