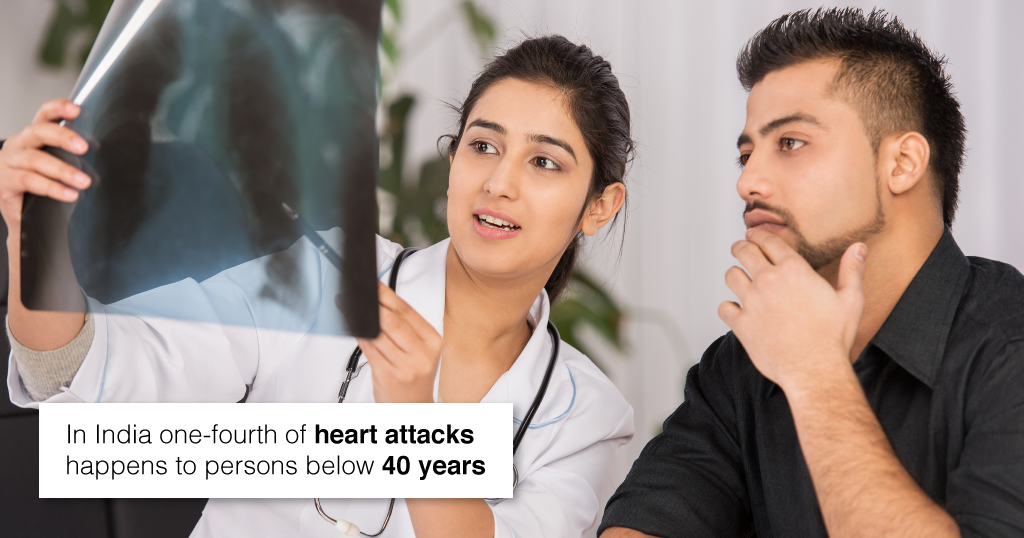 Indians have one of the highest rates of coronary artery disease in the world with a fifth of global deaths from heart disease. In addition, Indians are 3-20 times at greater risk of developing heart disease compared to others. While Western population witness 23 percent of deaths due to heart disease and stroke before 70 year of age, it is a whopping 52 percent among Indians.

Indians are also prone to heart disease 5-10 years earlier compared to other ethnic populations. A contributing factor behind heart attack in young Indians is the junk food culture. Read on to know why…

What is a heart attack?

A heart attack, known as a myocardial infarction in medical terms, occurs when a blood clot blocks the flow of blood to a coronary artery. Coronary arteries are blood vessels, which supply blood to the heart muscle. The interruption of blood flow to the heart’s muscular wall causes that part of the wall to get ‘damaged and destroyed’ and stop pumping blood.

Why Indians are at a higher risk?

Changing lifestyle, high stress in urban areas, food habits, smoking, binge drinking and finally, use of narcotics have increased the risk for heart disease among youth. Sedentary lifestyle is another major contributor for this life-threatening disease rising in a number of young Indians.

In addition, youngsters generally have the tendency to undermine the risk factors. Sometimes, ignoring routine check-up may cause youngsters suddenly succumbing to heart diseases. A great majority of youngsters including adults also fail to identify the warning signs, such as breathlessness, chest pain, undue fatigue and lack of stamina, cold sweats, chest pressure, asthma or even side effects of an emotional outburst like anger, etc.

Now, heart specialists are not surprised to see a 25-year-old or even teenagers becoming a victim of heart attack. In India one-fourth of heart attacks happens to persons below 40 years, thus presenting a major strain on the productive workforce as the “younger” working population is the one at risk.

What factors contribute to Heart Attacks?

Various factors that contribute to higher rate of heart attacks among Indians include:

What preventions can be taken?

The seeds of heart disease are sown at an early, young age. Thus, as a preventive measure, wider cardiac screening and health promotion are needed at schools and colleges. Government should also try proactively to see if lifestyle and awareness about heart diseases can be included in the curriculum. Cardiac screening among youth should include a review of blood pressure, family history, stress-related issues, heart-related symptoms, and other risk factors.

Indians will require specific lower cut-offs and stricter goals for treatment of various risk factors than is currently recommended for Western populations, one example of this being practiced is: The upper limit for BMI (body mass index) that decides whether an individual is considered obese has been lowered from 25 to 23 for Asians, as they are at a higher risk of obesity and cardiopulmonary arrests at marginally high body mass indexes.

A strategy to prevent cardiovascular diseases long before their onset is more cost-effective than providing interventions at a stage when the disease has already set in.

Facebook
Twitter
WhatsApp
Linkedin
Previous articleCan You Exercise After Getting A Heart Transplant?
Next articleLow Calorie Sweeteners – To Have or Not to Have
RELATED ARTICLES
Cardiology