Hookah Smoking – Dangers and Health Risks You Should be Aware of 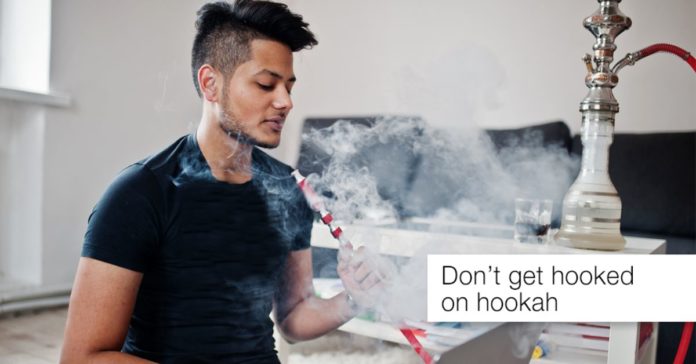 The hookah has become popular in urban India off late. Before you puff away at that hookah with your friends, be aware that you might actually be harming yourself.

What is a hookah?

The hookah, also known as sheesha or goza, was once seen only in Bollywood movies, being puffed at by spoilt nawabs and patrons of the nautch girls. Today, this age-old tradition has come back as a trendy hobby for young people unwinding at coffee shops or hookah bars. While, this tradition has been around for many years and is, in fact, a part of many Asian cultures, it does have health issues that one should be aware of.

Anatomy of a hookah

Most hookahs consist of a water pipe attached to a smoke chamber. Tobacco used in hookahs is specially prepared, making it possible for the smoke to pass easily through water.

Many young people smoke hookahs for their fruity flavours and are under the impression that hookahs do not contain any tobacco. This is in fact, not true. While most modern hookahs do come with a fruity aroma, tobacco is also used and has the same ill-effects as any other form of tobacco.

According to the World Health Organization, hookah contains numerous toxicants known to cause lung cancer, heart disease and other diseases. If you’re into hookahs, be aware of the ways in which it can be harmful to you:

Are hookahs safe for teens?

In one word, “NO”. Smoking hookahs is as harmful as cigarette smoking. It leads to the inhalation of many toxic compounds like tar, carbon monoxide and heavy metals, making it a major cancer risk.

It can also cause lung or oral disease, heart disease and other critical illnesses in youngsters. Worse, it could lead to a non-smoker getting addicted to nicotine.

Are hookahs safer than cigarettes?

That hookahs are safer than cigarettes is one of the biggest misconceptions that’s lead to their popularity. Hookahs are as dangerous or maybe, even more harmful than cigarettes. The long duration (typically 40 minutes) as well as the absence of any filter makes them highly unsafe. So if you want to stay away from tobacco, as you should, then stay away from hookahs as well.

Hookahs that use herbal molasses

Some hookah bars offer tobacco-less hookah, using herbal molasses instead. These are definitely safer than regular hookahs, but do check with the hookah bar first if they offer this option.

Although most of the people believe smoking hookah is safer and a social alternative to smoking cigarette, it does not offer any health benefits and poses many significant health risks. In addition, hookah smoking can also put other individuals at risk of inhaling second-hand smoke.

In conclusion, it is safer to avoid Hookahs altogether as they are toxic health hazards. Do not expose your health to such hazards, all for the sake of seeming cool and trendy.

Facebook
Twitter
WhatsApp
Linkedin
Previous articleLow Calorie Sweeteners – To Have or Not to Have
Next articleSprain Vs. Fracture – Ways to tell whether it is a broken bone
RELATED ARTICLES
Cardiology