How Obesity in India Is the Rising Cause of Heart Diseases 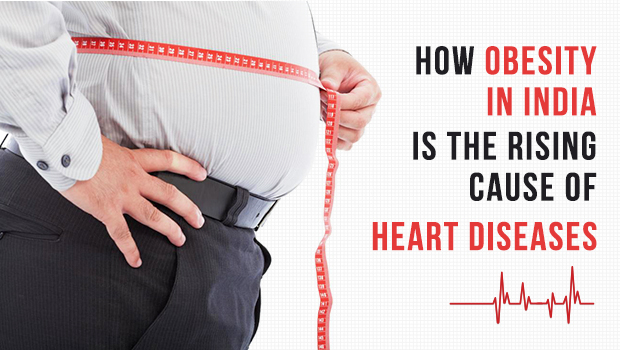 Obesity can be defined as the abnormal accumulation of large amounts of fat in the body which can be harmful to a person’s health. According to a study conducted in 2014, about 5% of India’s total population is obese. There were about 20 million obese women and 9.8 million obese men in the country in 2014. This obesity has reached epidemic levels as the rate appears to go higher as years go by.With heart disease being the highest cause of death in India in 2016, killing up to 1.7 million people, it is evident that India’s obese population is at a grave risk, as a result of their obesity.

Some of the health issues an obese person can develop which puts them at a higher risk of suffering from heart disease include:

1. HighBlood Pressure
Because overweight people have larger blood volumes than people within a normal weight range, their heart has to pump a larger amount of blood than is healthy for it. This puts too much pressure on the heart and causes damage to it.

3. Diabetes
Obesity can lead to insulin resistance, a situation where a person’s system becomes resistant to the effects of insulin, which is responsible for lowering the body’s glucose levels. This insulin resistance can eventually result in the development of diabetes. Having diabetes puts them at an even greater risk of developing heart disease.This is because high blood glucose levels resulting from diabetes can cause damage to blood vessels and the heart, slowly damaging the heart.

If you weight more than what is normal for your height, or if your BMI is in the overweight range, it is important that you take concrete steps towards losing and maintaining a healthy weight range in order to lower your risk of developing heart disease. One major reason people become overweight is because they are not burning as many calories as they are taking in. Ensure you stay as active as possible every day. Exercise frequently, regularly go on walks, do household chores and engage in other physical activity. In addition, watch the amount of food you eat daily to make sure you’re not eating too much as this may result in unnecessary weight gain.