HomeHealth A-ZHow Often Do You Need to Get a Tetanus Shot?
Health A-Z

How Often Do You Need to Get a Tetanus Shot? 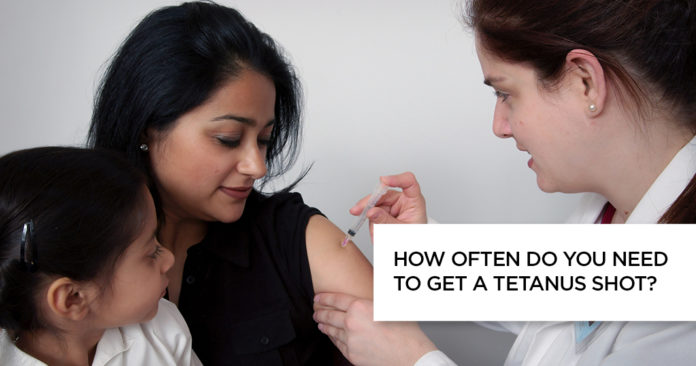 The tetanus vaccine is a part of the vaccine series for a child and adult immunization that provides protection against the bacterial infection tetanus also referred to as “lockjaw.” Tetanus is caused by a bacterial toxin that attacks the nervous system, causing painful muscle contractions, usually around the neck and jaw muscles.

You can get tetanus  by a cut or other wound. The tetanus bacteria are common in soil, dust, and manure. You could also contract tetanus through deep punctures from wounds created by contaminated nails or knives.

Fortunately, because of the tetanus vaccine, the cases of a tetanus infection have been reduced globally, although it is still common in developing countries.

What are the symptoms of tetanus?

The symptoms of tetanus can appear anytime from a few days to several weeks after you have been infected by the tetanus bacteria. The average incubation period ranges from 7 to 10 days.

The symptoms occur because of the toxin produced by the tetanus bacteria. The most common symptom is a stiff jaw that can often get locked, because of which it came to be known as lockjaw.

Some of the commonly observed symptoms include –

If not treated at the right time, a tetanus infection can lead to death from suffocation.

Complications of Tetanus include:

As soon as the tetanus toxin bonds to your nerve endings, it is impossible to get it remove. Complete recovery from a tetanus infection needs new nerve endings to grow that may take up to several months.

Tetanus infection complications may include:

Tetanus is a result of the toxin produced by spores of the Clostridium tetani bacteria found in dust, animal feces, and soil. When these spores enter deep into a flesh wound, they transform into bacteria which releases a deadly toxin called tetanospasmin.

The muscles, i.e., motor neurons that control the functioning of the muscles get impaired by the toxin. This results in spasms and stiffness of the muscles, which is a major symptom of tetanus.

Cases of tetanus are commonly observed in people with no prior vaccination or adults who have not taken their 10-year booster shot. Tetanus is not a contagious disease and hence cannot be transferred from one person to another.

What is the treatment for tetanus?

There is no cure for tetanus. The available treatment options include taking care of the wound, medications to ease the symptoms, and proper supportive therapies.

The first step, in order to prevent the growth of the tetanus spores is to remove any foreign objects, dirt, or dead tissues from the wound.

Your doctor may prescribe the following medicines for treating tetanus .

People with severe tetanus need to stay in an intensive care environment. As sedatives inhibit breathing you might need to stay under ventilation temporarily.

What are the potential risk factors associated with tetanus?

Though tetanus is not a contagious disease, the following can increase the likelihood of getting tetanus –

Tetanus can develop from the following –

How to prevent a tetanus infection?

The only way to prevent a tetanus infection is by getting vaccinated on time. The tetanus vaccine shot is usually given in the deltoid muscle. Children are given shots in the thigh or arm.

It is advised that adolescents get a dose of DTaP, preferably between the ages of 11 and 12, and a DT booster every 10 years thereafter.

It is okay to receive an additional boost of the tetanus vaccine, especially if you are being treated for a severe injury, such as a puncture wound or a deep cut. Taking vaccines at the right time is the best way to prevent tetanus.

An adult who has never been vaccinated should get the initial three tetanus shots. The first two are given at a gap of about four weeks whereas the third one is given after six to twelve months of the second shot. After completion of the initial series, boosters are advised every ten years. Consult a healthcare practitioner to know more about the tetanus vaccine.