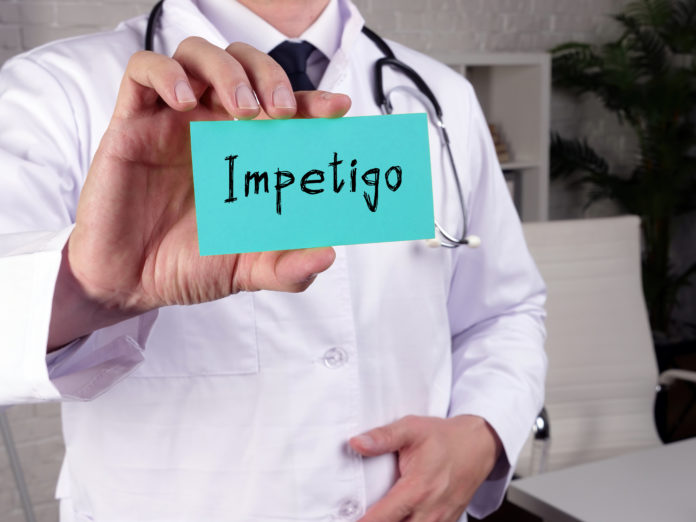 Impetigo is a very contagious skin infection that primarily affects newborns and young children. Staphylococcus bacteria are typically the reason for impetigo. It manifests itself as reddish sores on the face, particularly around the nose and mouth, as well as on the hands and feet. The lesions burst and produce honey-colored crusts after about a week.

Bullous impetigo, a less prevalent type of ailment, generates bigger blisters on the trunk of infants and young children. Ecthyma is a severe form of impetigo that results in painful, pus-filled lesions.

Bacteria flourish in hot, humid environments. Impetigo is more seasonal, peaking in the summer and fall. It tends to happen all year in warm, humid settings.

One can contract impetigo by coming into contact with someone who has it and their sores, mucous, or nasal discharge. People can also spread impetigo through sharing personal goods with infected people, such as towels, clothing, and other personal objects.

Impetigo affects children between the ages of 2 and 6. It can also affect adults.

If any of the following is true, one might be at a higher risk of Contacting Impetigo:

Infections are common among people who live in the same residence as children who attend daycare.

What are the symptoms of impetigo?

Reddish lesions on the skin, frequently grouped around the nose and lips, are the earliest signs of impetigo. These sores quickly turn into blisters, which ooze and rupture, leaving a yellowish crust behind. The blister clusters may spread to cover a larger area of the skin. There are times when the red areas produce a yellowish crust without blisters.

If someone develops staph impetigo, they may notice the following symptoms:

What are the types of impetigo?

Impetigo is classified into three categories based on the bacterium that causes it and the sores it causes. Each type goes through a progression.

Staphylococcus aureus is the most common cause of non-bullous impetigo. It’s the most prevalent type of impetigo, accounting for approximately 70% of cases.

This condition progresses through certain stages as listed below:

This is a far more dangerous infection that is far less prevalent. When impetigo isn’t treated, this can happen. Ecthyma is more severe than other types of impetigo because it penetrates deeper into the skin.

How is impetigo diagnosed by a doctor?

The doctor may search for sores on the face or body to identify impetigo. In most cases, lab testing isn’t required.

If the sores do not heal after antibiotic therapy, the doctor may examine a sample of the liquid produced by the sore. Pathologists can establish which bacteria is causing the ailment, which can aid in the selection of the appropriate medication. Certain antibiotics have developed resistance of some types of bacteria that cause impetigo.

Tell the doctor straight away if there is any blood or an unusual color in their urine.

What are the causes of impetigo?

The bacteria Staphylococcus aureus (“staph”) is usually to blame. It is sometimes caused by Streptococcus group A bacteria. Strep throat and fever are also caused by these bacteria.

Glomerulonephritis can be caused by some types of strep bacteria that cause impetigo. High blood pressure and blood in the urine are two symptoms of this inflammatory kidney disease.

Staph bacteria can be found on the inside of certain people’s noses. If the bacteria travel to their skin, they may become sick.

Impetigo is more likely to affect adults and children if they:

What are the complications associated with impetigo?

Impetigo isn’t usually hazardous. In mild cases of the illness, the sores usually heal without scars.

Impetigo can cause the following issues in rare cases:

What are the risk factors of impetigo?

Impetigo can be caused by several factors, including:

The key to treating — and preventing — impetigo is to keep a clean environment and practice proper personal hygiene. Once the patient has contracted the virus, they will need to act quickly to keep it under control and prevent it from spreading further.

To kill the impetigo-causing bacteria, it’s is recommended to wash the towels separately in hot water and dry them in a hot dryer. Cover sores to prevent infection from spreading to other regions of the body or other person.

How long does it take to treat impetigo?

Impetigo can be contagious for weeks if not treated. The illness is infectious after commencing impetigo treatment until:

How can you prevent impetigo?

Staying clean and healthy are the best strategies to avoid infection. Other impetigo prevention tips include:

Verified By Apollo Dermatologist
https://www.askapollo.com/physical-appointment/dermatologist
The content is carefully chosen and thoughtfully organized and verified by our panel expert dermatologists who have years of experience in their field. We aim to spread awareness to all those individuals who are curious and would like to know more about their skin and beauty
Facebook
Twitter
WhatsApp
Linkedin
Previous articleHand Eczema – Symptoms, Causes, Types and Treatment
Next articleFemale Condom vs. Male Condom: Pros and Cons
RELATED ARTICLES
Cardiology