Is It Possible to Have Sexual Intercourse if You Have Peyronie’s Disease? 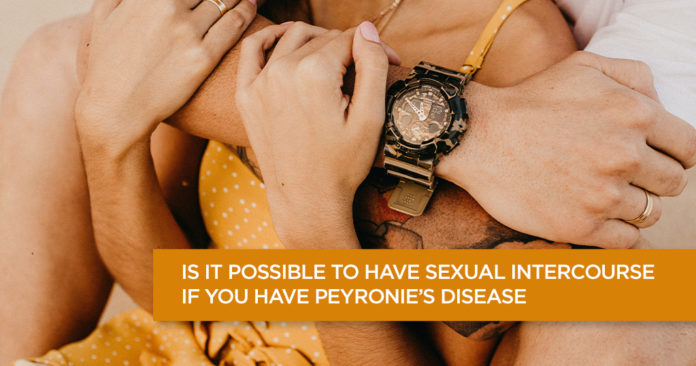 Peyronie’s disease is a disorder caused due to scar tissue, known as a plaque that results in a curved or a bent penis. This further results in a painful erection, difficulty in maintaining erections, and can also cause of erectile dysfunction as well in men. It can cause difficulty in having sexual intercourse or cause complete inability to have sex.

What is Peyronie’s Disease?

Doctors have been unable to pinpoint a particular cause of Peyronie’s disease. Still, research shows that the development of the plaque often starts post-physical trauma or injury to the penis that causes internal bleeding and scarring. Other studies also indicate heredity and side effects of certain medications as causal factors of Peyronie’s disease.

Although both older and younger aged men can develop Peyronie’s disease, middle-aged men, on average, develop this disease.

What are the symptoms of Peyronie’s disease?

The symptoms of Peyronie’s disease either appear gradually or develop overnight. These are:

● Development of pain- You could develop penile pain with or without an erection.

● Development of scar tissue- The scar tissue can be felt like a hard tissue underneath the skin of the penis.

● Bent penis- The penis develops a bend or a curve upwards, downwards, or to a particular side.

● Problems while erection- The main problem associated with Peyronie’s disease is erectile dysfunction. This also manifests as difficulty attaining or maintaining an erection.

What are the complications of Peyronie’s disease?

Various complications arise from Peyronie’s disease. These are:

● Pain in the penis

● Reduction in the length of the penis

● Developing increasing difficulty in attaining and maintaining an erection

● Difficulty in having sexual intercourse

● Strain in the relationship with the sexual partner

What are the risk factors involved in Peyronie’s disease?

The cause of Peyronie’s disease is not yet understood, but research suggests that various factors are involved that lead to the occurrence of this disease. One of the main reasons for developing Peyronie’s disease is the injury to the penis in an accident, athletic activity, and even sexual intercourse.

The primary risk factors involved are:

● Age- Although Peyronie’s disease can happen in men of any age, it is most prevalent in middle-aged men (between 50 and 60 years of age).

● Heredity- Having a family member with Peyronie’s disease markedly increases the risk of acquiring one.

What are treatments modalities for Peyronie’s disease?

A physical examination, along with other specific tests such as an ultrasound, assists your doctor in confirming the condition. Post confirmation of the disease, various treatment modalities can be followed depending upon the severity and advancement of the condition.

What Treatments Are Available?

Medications like pentoxifylline or potassium para-aminobenzoate can be used. If these do not work, you can get a shot of collagenase (Xiaflex) or verapamil into the scar tissue of the penis. If nothing else works, your doctor may consider surgery, but generally only for men who cannot have sex because of their Peyronie’s disease.

The two most common operations are:

1. Remove plaque and get tissue graft in its place.

2. Alter or remove the tissue on the side of the penis opposite the plaque, which counters the disease’s bending effect.

In certain cases, it may be an option to get a penile prosthesis implanted. However, such treatment is only for men who suffer from both Peyronie’s disease as well as ED (erectile dysfunction).

To consult a doctor,

What are the precautions to prevent Peyronie’s disease?

Peyronie’s disease can be prevented by avoiding injury to the penis. This can be done in the following ways:

● Treat injuries to the penis immediately

Peyronie’s disease is characterized by the development of a plaque or scar tissue underneath the skin of the penis. This can be felt upon touch. This also causes a curved or bent penis. Apart from this, men suffering from Peyronie’s disease develop painful erections during sexual intercourse.

2. Can Peyronie’s disease heal itself?

Unfortunately, Peyronie’s disease cannot heal by itself and requires medication or surgery depending upon the advancement of the disease. The acute stage of the disease can be treated with the administration of certain medications that break the collagen. In contrast, chronic and advanced conditions are treated via surgery.

3. What happens if Peyronie’s disease is left untreated?

Peyronie’s disease worsens when left untreated. This further causes painful erections and advances the illness to an untreatable stage that would require surgery to mend the curve to a certain extent. Even though a complete cure for this disease has not yet been discovered, certain drugs and surgery can improve the bent condition and length of the penis.

4. How do you get Peyronie’s disease?

No definite causal factors of Peyronie’s disease have been identified yet. Still, research suggests that you could acquire this due to a physical injury to the penis that causes internal bleeding leading to the development of scar tissue, heredity, and even as the result of the side effects of specific medications.

Can Famvir treat or help with the symptoms of COVID 19?

Can we prevent or kill Coronavirus by inhaling steam of hot water with a bit of clove juice, eucalyptus oil, essential oils and pain balm?

Is It Possible to Have Sexual Intercourse if You Have Peyronie’s Disease?

Post-COVID-19 Care – Things You Must Do After Recovering

Is Gestational Diabetes A Threat To The Fetus?