Kidney diseases that have turned chronic with time 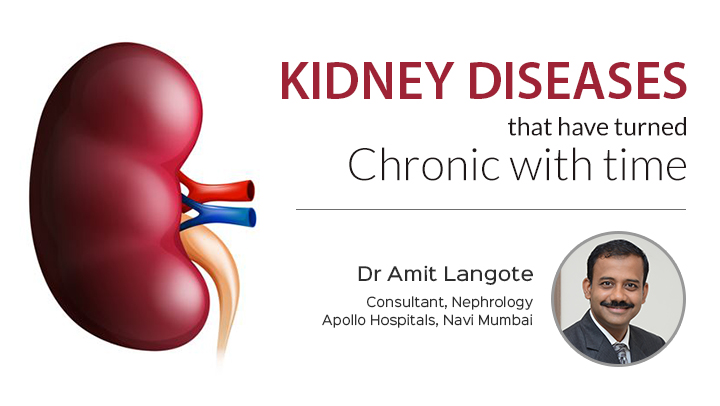 1.Is the average age of people undergoing dialysis going down with each passing year?
Yes, we are seeing a lot many younger patients on Dialysis now than before. In fact, Patients from the North India were younger and those from the east zone older compared to those from the south and west zones. (Source – Indian Chronic Kidney Disease registry report)
Part of the reason for in early detection of CKD due to medical checkup and accessibility to dialysis centers even in rural areas. Epidemic of Obesity and Diabetes remains an important cause of CKD.

2. Should women, as conscience keepers of society, can drive this awareness to their loved ones and play a key role in regulating India’s excessive salt consumption habit?
Most Indian women remain in charge of the food that is prepared at home. Increasing their awareness to reduce salt, oil and sugar in the diet of their loved ones would go a long way in curbing Diabetes, Obesity and help better management of Hypertension.
In fact, Nephrologists from Mumbai have launched a campaign called “Ek Chammach Kam”, where they are urging all citizens to reduce one teaspoon of salt, oil and sugar daily from their diet. And we hope that this small step will go a long way to create awareness about Chronic Kidney Disease, Diabetes, Hypertension and Obesity

3. Is there a recent study/report/research available which could shed light on the percentage of Indians suffering from kidney diseases?
Unfortunately medical research in India has been neglected and plagued by shortage of funding. However, an attempt has been ongoing to collect information about CKD by voluntary participation of Nephrologists across India. The first and last report of this Indian Chronic Kidney Disease Registry was published in 2012 in BMC Nephrology.
As per the report the mean age of Chronic Kidney Disease, patients was 50.1 ± 14.6 years, with M:F ratio of 70:30. Patients from North Zone were younger and those from the East Zone older. Diabetic nephropathy was the commonest cause (31%), followed by Chronic Kidney Disease of undetermined etiology (16%), chronic glomerulonephritis (14%) and hypertensive nephrosclerosis (13%). Patients in lower income groups had more advanced Chronic Kidney Disease at presentation. Patients presenting to public sector hospitals were poorer, younger, and more frequently had Chronic Kidney Disease of unknown etiology. However, the report could not give prevalence of CKD in India, as it was only hospital based data.
However, the overall prevalence of CKD in the SEEK-India cohort was 17.2% with 6% have CKD stage 3 or worse

4. The opinion from the nephrologist?
Diabetes, Hypertension, remain leading and preventable cause of CKD in India. It should be stressed to all primary care physicians taking care of hypertensive and diabetic patients to screen for early kidney damage. Early intervention may retard the progression of kidney disease. Planning for the preventive health policies and allocation of more resources for the treatment of Chronic Kidney Disease/End Stage Renal Disease patients are imperative in India. Laudable campaigns like “EK Chammach kam” should be supported and promoted on various media platforms to create awareness among people