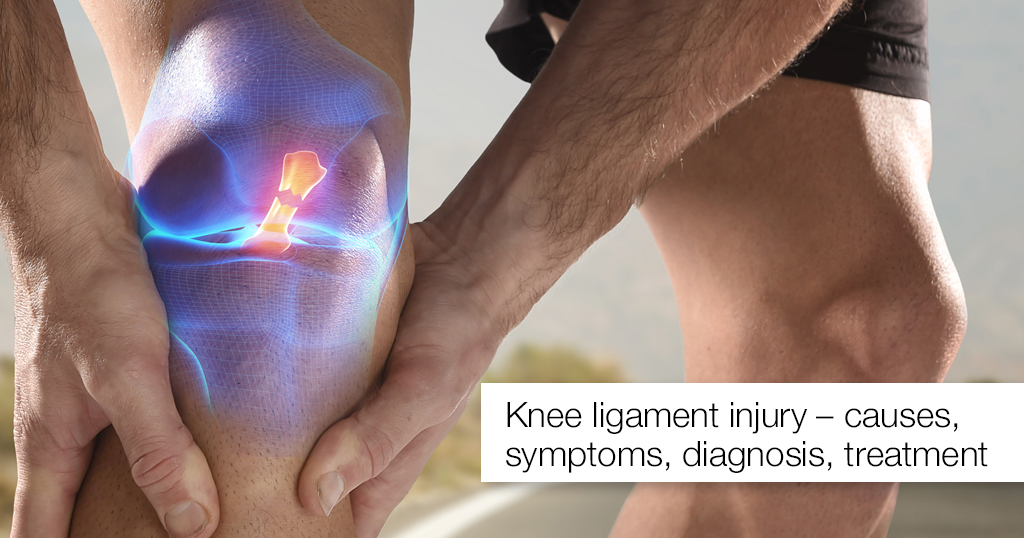 Injury to the ligaments of the knee is a common problem for sportspersons and physically active people. In fact, anyone can injure their knee ligaments.

WHAT EXACTLY IS A LIGAMENT?

A ligament is a strong band of connective tissue that connects one bone to another in a joint. The knee has four ligaments which connect the femur or thigh bone to the bones of the leg, namely the tibia or the shin bone and the slender fibula which is the outer bone. Ligaments help stabilize the joint during movements of the joint and keep the bones in their proper positions.

LIGAMENTS OF THE KNEE

There are four ligaments and each knee ligament is responsible for a certain movement.

A knee ligament is likely to suffer injury if strenuous activity is suddenly undertaken without any warm-up or stretching or taken up by a person who is not fit. The ACL injury is more common in women. About half of these injuries are associated with another ligament injury. Sportspersons pursuing football, soccer, basketball and tennis are likely to suffer from an ACL injury sometime in their career. Other people at risk include gymnasts and skiers.

A blow to an outstretched leg with the foot planted on the ground generally gives rise to injury. A knock on the knee for e.g. while walking in the house where you may knock your knee against furniture, may also cause a knee ligament injury.

An ACL injury may not cause any pain. There is likely to be a snapping or popping sound when the injury occurs. If there is a blow to the knee, it may be painful. There may be tenderness i.e. pain on touching the affected knee. The knee may swell, get inflamed and later on show signs of bruising.
There will be difficulty in placing body weight on the affected side. Someone may have to help you to get to the car or hospital. Walking will be painful. There may be fluid collection inside your knee joint causing it to look swollen.

A thorough history of how the injury occurred and a local examination checking different movements and the location of the pain will give the doctor a clue to the diagnosis.

X-rays of the knee in antero-posterior (AP) and lateral views may be advised. USG, CT scan or an MRI of the knee joint may be ordered to get more information about the affected joint. An arthroscopy may be done in which the knee joint can be visualised by a doctor through an instrument called an arthroscope inserted into the joint.

A partial tear or a mild ligament injury may heal on its own. If the Anterior cruciate ligament (ACL) or Posterior cruciate injury (PCL) is completely torn, it will most likely need surgery.

It is very important to follow the doctor’s orders after a knee ligament injury.

Rest is advisable with the affected knee elevated, walking to be kept to a minimum and ice application should be done for ten to thirty minutes at a time, every four hours for the first two days. Ice helps control swelling and inflammation and reduces pain. An alternative to ice is a pack of frozen peas.

Painkillers – Paracetamol or NSAID’s can be given if pain is unbearable.
An anti-inflammatory gel like diclofenac gel can be applied to soothe the area. It is best to take medication after consulting your doctor .

After 48 hours, heat application to the affected joint is advised. A hot towel can be applied or a hot water bag can be kept around the affected knee.

Your doctor may bandage the knee to help support it and to control the swelling, but it depends on the individual case.

A torn ACL or PCL will need reconstruction. It cannot be repaired by stitching it together. Reconstruction means using a part of a tendon from some other area in the body or from a cadaver. A ligament injury of the knee heals slowly and usually takes months, with or without surgery. Avoid overusing the injured knee as it will make recovery slower and may do more harm in the future.

Our dedicated team of Orthopedicians who are engaged in treating simple to complex bone and joint conditions verify and provide medical review for all clinical content so that the information you receive is current, accurate and trustworthy

Facebook
Twitter
WhatsApp
Linkedin
Previous articleHealth and Caffeine: What you need to know
Next articleDifference between Dengue, Malaria and Chikungunya and Its Preventions
RELATED ARTICLES
Ortho Care

What can cause Knee Pain without injury?

Causes and Symptoms of Rheumatoid Arthritis