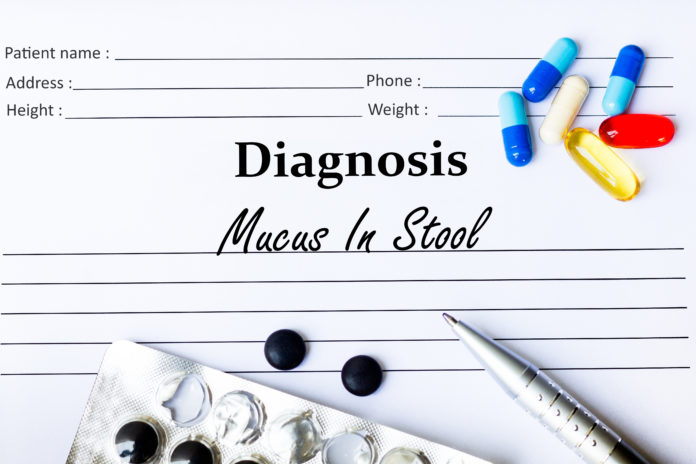 What is mucus in stool?

Mucus is a thick, jelly-like substance. The body uses this substance to protect the tissue and organs. It also lubricates the tissue and organs.  Mucus reduces the damage caused by bacteria, fungus or viruses and protects the stomach against harmful fluids and stomach acids. A small quantity of mucus in the stool is generally not to be worried about. Normally, stool contains a small amount of mucus — a jelly-like substance made by intestines to keep the lining of the colon lubricated and moist.

But you should talk to your doctor if you notice an increased amount of mucus in stool — particularly if it begins happening regularly or if it’s accompanied by bleeding or a change in bowel habits.

If you have any of the above symptoms, call your doctor

What are the causes of mucus in stool?

When does mucus in stool become serious?

Mucus in stool is normally an easily treatable condition. But if you spot blood or pus in stools, severe abdominal pain, or constant diarrhea, immediately meet an expert since it can have some serious underlying cause.

How is mucus in stool diagnosed?

The first step in finding is to test a sample of the stool. The doctor has to diagnose and treat underlying problems related to inflammation in the colon.

The stool sample results help to find if the person requires further tests to find the cause of mucus in the stool. The following are the tests usually recommended by healthcare professionals:

How is mucus in stool treated?

Mucus in stool is a symptom of an underlying condition. Therefore, the treatment varies depending on the type of diagnosis. If it is mild, then lifestyle changes play a major role to resolve the issue. Various changes that can be made are:

When is a patient suggested to visit a doctor?

If the mucus in the stool occurs rarely, there’s nothing to worry about . But if the mucus is accompanied by other symptoms, it is advised to consult a doctor immediately. The following are some of the cases that require immediate attention:

Most people have mucus in their stools, but it’s usually so little that it goes unnoticed. Mucus in stools may be a sign of a more serious health problem. The patient should speak with the doctor about the other symptoms you’re having, as well as the duration and amount of mucus in the stool, to rule out something more serious. If the doctor suspects an underlying issue, he or she will ask about the medical and nutritional history, perform a physical exam, and order tests.

What does white mucus in stool mean?

White mucus in stool along with the presence of blood may indicate rectal or colon cancer. It is advised to visit a healthcare provider to rule out the possibility of dangerous underlying diseases.

What does bloody mucus in stool means?

Bloody mucus in stool accompanied by abdominal pain, can be indicators of serious conditions like Crohn’s disease, ulcerative colitis and even cancer.

Is it normal to see mucus in your poop?

It is normal to see small amounts of mucus in the poop. But if it is associated with blood, severe abdominal pain or diarrhea, a healthcare provider should be visited to track the dangerous underlying disease, if there is any.