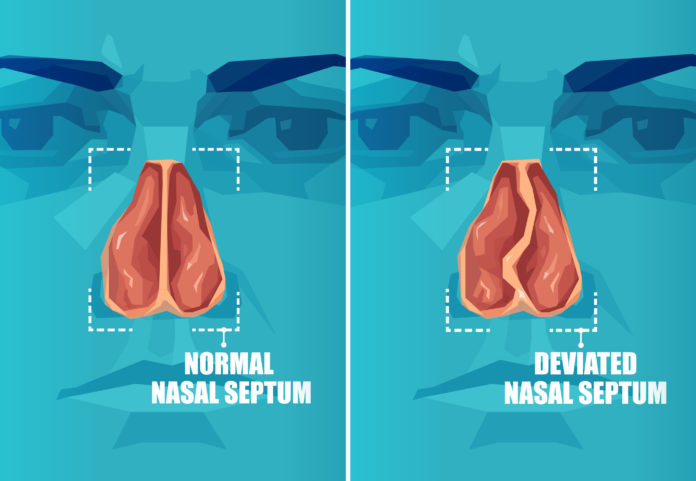 Nasal septum deviation is a condition in which the nasal septum is displaced towards one side. Most people have a mild form of septal deformity and in most cases, it does not result in symptoms. But for people with moderate and severe cases of deviated septum, their breathing will be negatively impacted and this can lead to other serious conditions like sleep apnea and nose bleeds.

What is a deviated septum?

The nasal septum is a thin wall, made of bone and cartilage, which is located at the center of the nose. This wall separates the right nostril from the left, and its primary function is to provide a structural support to the nose. The septum also hosts the mucous membrane which helps in fighting and expelling infections. A normal septum divides your nasal cavity into two similar sized chambers.

A deviated nasal septum occurs when the septum has shifted away from the midline, causing a blockage or obstruction to one or both the nasal chambers. Depending on the extent of the deviation, the severity of the symptoms may vary.

What are the common symptoms of nasal septum deviation?

Other symptoms associated with a deviated septum include:

What causes a deviated septum?

The causes of a deviated nasal septum are –

Common risk factors that can lead to a deviated septum

The biggest risk factor for a deviated septum is any kind of injury to the nose. This includes –

What are the complications leaving a deviated septum untreated?

An untreated deviated septum can lead to the following conditions:

B) Surgery (permanently treating the condition)

If the nasal deviation symptoms are severe, experts at Apollo Hospitals recommend surgery to fix the deviated septum. This procedure is called Septoplasty, and it involves surgically fixing the deviated septum by repositioning or straightening it. This procedure may also require your surgeon to remove certain parts of your septum before reinserting them into the proper position.

How do you prevent a deviated septum?

The best way to prevent a deviated septum is to avoid injuries to the nose. This includes wearing a helmet of any protective gear when playing contact sports, wearing a seat belt when driving, avoiding any sort of physical impact on your nose. In short, as long as you protect your nose from any physical injury, your septum should be fine.

A Note from Apollo Hospitals/Apollo Group

Nasal Septum Deviation is a condition that can negatively affects the quality of life, as obstructions in the nasal pathway can severely limit a person’s ability to breath. One of the biggest concerns with leaving this condition untreated is the possibility of the onset of more severe disorders, like sleep apnea.

But don’t worry! This condition can be treated through medication and surgery. Getting in touch with your Apollo doctor is the first step in understanding the severity of the condition. Based on the diagnosis, Apollo doctors will provide the right course of treatment to treat your deviated septum and improve the quality of your life.

What problems can a deviated septum cause?

A deviated septum can cause problems like fatigue, headaches and an overall feeling of low energy. Over the course of time, these symptoms may become more severe, but by booking an appointment with your Apollo doctor, you can alleviate all discomforting symptoms through septoplasty.

Can you fix a deviated septum without surgery?

To fix a deviated septum, surgery offers the most effective and lasting solution. Patients with mild discomfort can manage symptoms through medication. However, it is recommended to reach out to your Apollo doctor for an accurate diagnosis and discuss the best course of action together.

Is my unchecked deviated septum aggravating my Sinusitis symptoms?

Any obstruction of blockage in the nasal chamber will increase the chances of Sinusitis. The best way to check if you have a deviated septum is to schedule an appointment with your Apollo doctor.

Does snoring indicate a deviated septum?

Yes it can! Snoring can also point at other existing conditions that you may not be aware of. If your snoring is hampering your quality of sleep, the best course of action is to schedule an appointment with your Apollo doctor and discuss your symptoms in more detail to understand the root cause.

How can you tell if you have a deviated septum at home?

Does a deviated septum cause pain?

It can, but more than pain, deviated septum can cause discomfort and negatively impact your day-to-day activities. Clear and unobstructed breathing can greatly enhance the quality of life and alleviates discomfort from nasal congestion, headaches and nosebleeds.

How does it feel to have a deviated septum fixed?

Many patients, especially those who have been severely affected, have reported a significant improvement in the quality of their lives – better sleep, improved cardio-vascular performance and better mental focus.