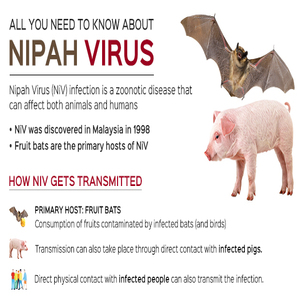 The deadly Nipah virus outbreak has already claimed 17 lives in Kerala last year. Now, a fresh case of a 23-year-old student infected with Nipah Virus has been reported from Ernakulam district in Kerala again. Besides this 23-year-old student, the Kerala health officials have identified 86 others who interacted with this student. They are now under observation for possible Nipah virus infection.

Here is what you need to know about Nipah virus:

What is Nipah virus (NiV)?

Nipah virus is a zoonotic virus, which means that it spreads from animals to humans. Nipah virus is transmitted from fruit bats to animals and to humans. The virus got its name from the village, Sungai Nipah in Malaysia where the virus was first identified in 1998-1999. Normally, this virus affects animals like dogs, horses, pigs, among others. If Nipah virus spread among humans, it may cause a serious infection that can result in death.

How does Nipah virus spread among humans?

Nipah virus spreads to humans if they establish close contact with Nipah-infected bats, pigs or even infected people.

Secretions of a bat, laden with Nipah virus can infect people while they climb the tree for fruits, or while handling/eating contaminated fallen fruits or by consuming raw date palm sap/juice or today. Besides animal-to-human, Nipah virus transmission can also happen between humans. The human-to-human transmission happens when a healthy person establishes close contact with, Nipah virus infected individual at home or during treatment at hospitals.

What are the symptoms of Nipah virus infection?

Nipah virus-infected individuals may suffer from:

What precautions can be taken to minimize the effect of Nipah virus?

To prevent, minimize and avoid transmission of Nipah virus, one should take the following precautions: