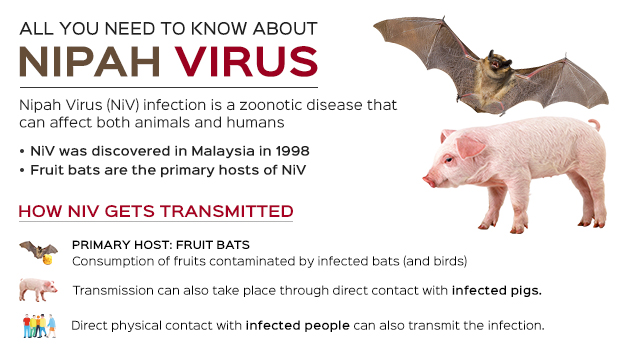 Nipah virus (NiV) is a member of the family Paramyxoviridae. It was first identified in 1999 in Singapore, following an outbreak of encephalitis and lung infection in people with association to infected pigs in Malaysia and Singapore.

Transmission:
The virus is spread through direct contact with infected animals like bats, pigs and horses. In the Malaysian outbreak human infection occurred in people with contact with pigs. In Philippines, the source was traced to infected horses, which was an intermediary host. Drinking of raw date palm sap that has been exposed to fruit bat excreta is considered to be the source in Bangladesh where outbreaks have occurred annually. The Nipah virus isolated in Siluguri, India was closely linked to the NiV in Bangladesh.  Person to person transmission is noted in family members and healthcare providers

Symptoms:
NiV can affect people of all ages.
Symptoms begin 5-14 days after exposure. The initial symptoms are fever and headache followed by drowsiness, disorientation and confusion, progressing rapidly into coma. About half of the affected people have respiratory illness as well. Close to 40% of the hospitalized patients had died because of the disease in Malaysian outbreak in 1998-1999. Severe long term neurological complications can occur including persistent convulsions and personality changes.

Diagnosis:
Serologic tests of paired sera during the acute and convalescent stages can be used for diagnosis. Real time PCR of throat and nasal swabs, blood, urine and CSF can also be done. Immunohistochemistry of the brain tissue can be done in fatal cases.

Treatment:
treatment is primarily supportive. Ribavirin is effective against NiV invitro; data of it’s use in humans is inconclusive and its efficacy uncertain. Passive immunization using a human monoclonal antibody targeting the Nipah G glycoprotein has been studied in animals.
Since the virus can be transmitted from person to person, appropriate infection control practices have to be in place in the hospital setting.
Prevention:
In the endemic areas, avoid exposure to bats, pigs and other animals that can potentially transmit the disease Avoid drinking raw date palm sap.

How To Live Well With Epilepsy

Mitraclip Valve Repair – Everything You Need to Know

Balance Disorders: All you wanted to know