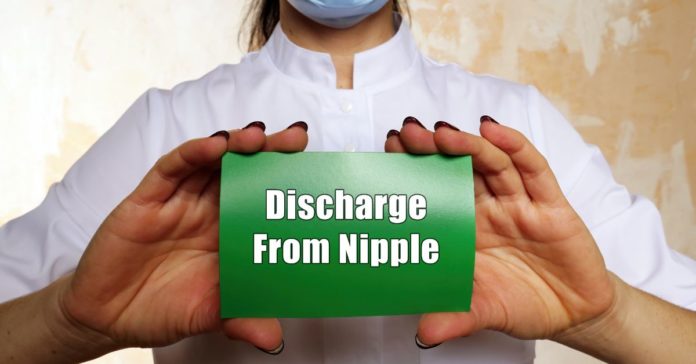 Nipple discharge is the term for the passage of liquid through nipples. It may happen spontaneously or due to manipulation of breast tissues. It is not something to be concerned about, but it may occasionally lead to health issues.

Nipple discharge is possible at any age and in women and men. Read on to know more about nipple discharge, its causes, and when to consult a doctor.

What is Nipple discharge?

Nipple discharge can be normal and abnormal, depending on its type, colour, and individual health conditions. If you are a breastfeeding mother, it is likely to occur . However, in other cases, you should monitor the condition.

Nipple discharge is a common breast condition . According to a study, 80% of women have nipple discharge at least once in their reproductive years. The severity, risk factors, and treatments depend on the nature of the discharge.

A nipple discharge in the following conditions can be normal:

What are the Causes of Nipple Discharge?

Hormonal changes are responsible for nipple discharge. The colour and the type of liquid may reveal the cause. It is advisable to look at the other symptoms as well. Some causes of nipple discharge include :

Potential causes of nipple discharge include:

What are the Types of Nipple Discharge?

Nipple discharge categories by their types are:

All types of nipple discharge can be normal or abnormal. They may or may not require treatment, depending on individual health conditions.

A clear watery discharge can occur in women and men at any age. Nipple discharge due to stimulation or frequent squeezing can be responsible for a clear discharge.

Breasts have a nature to respond strongly to stimulation.

While nipple discharge can occur due to the following reasons:

Yellow discharge is common in women nearing menopause. The condition often arises in individuals with mammary duct ectasia. This is when the milk duct gets thicker and blocked in the walls of the breast. It further causes discharge from the nipples.

You can minimize duct ectasia with warm compressors. However, if it causes breast pain, your doctor may recommend surgical treatment.

The following are the symptoms of breast infection:

Red discharge from the nipple is uncommon. However, it can be frequent and at no risk in nursing parents. Yet, you should consult a doctor if it continues.

One cause of red discharge can be benign papilloma. The condition may cause lumps and unilateral discharge.

Although bloody discharge may resolve on its own, your doctor may recommend a breast ultrasound and a diagnostic mammogram to see what is causing the discharge. You may also require a biopsy to exclude a cancer and confirm that it is a papilloma . If biopsy confirms a papilloma, then your doctor may refer you to a surgeon for discussing the treatment options.

Nipple discharge often stems from a benign condition. However, breast cancer is a possibility, especially if:

Visiting a doctor is always advisable for any kind of nipple discharge. Even if the condition is normal and there are no alarming symptoms, it may signify underlying health issues.

Visit a doctor if you observe any of the following symptoms:

How to Prevent Nipple Discharge?

Nipple discharge is not something you can stop. It is natural and common, and it can be frequent. You can opt for certain solutions that may help. These are:

How Do Doctors Treat Nipple Discharge?

The treatment of nipple discharge depends on its underlying causes. The treatment may vary from just a consultation with a doctor to medication and surgical treatments.

Nipple discharge is one of the  most common breast complications. However, if you experience an abnormal nipple discharge for a longer period, consult a doctor.

Nipple discharge is a natural function of the breasts. It happens due to hormone changes. Thus, it can be associated with periods. If you have nipple discharge before your periods, there is nothing to be concerned about.

No. Nipple discharge is normal during an individual’s reproductive years. Even though a woman is pregnant, nipple discharge can occur. Missing menstruation can be a sign of pregnancy, but it does not necessarily mean you are expecting a baby. Moreover, there is no proven evidence that says nipple discharge indicates pregnancy.

The discharge unrelated to pregnancy is called Galactorrhoea. The situation arises due to excessive production of prolactin. However, when a woman gets pregnant, she experiences hormonal changes that produce colostrum. In some cases, if you are taking estrogen supplements, you are more likely to experience nipple discharge due to imbalanced hormones.

Verified By Apollo Gynecologist
https://www.askapollo.com/physical-appointment/gynecologist
The content is verified by our experienced Gynecologists who also regularly review the content to help ensure that the information you receive is accurate, evidence based and reliable
Facebook
Twitter
WhatsApp
Linkedin
Previous articleHistamine Intolerance: Causes, Symptoms and Treatments
Next articlePeeling Skin: Symptoms, Causes, Prevention and Complications
RELATED ARTICLES
Gynaecology Care