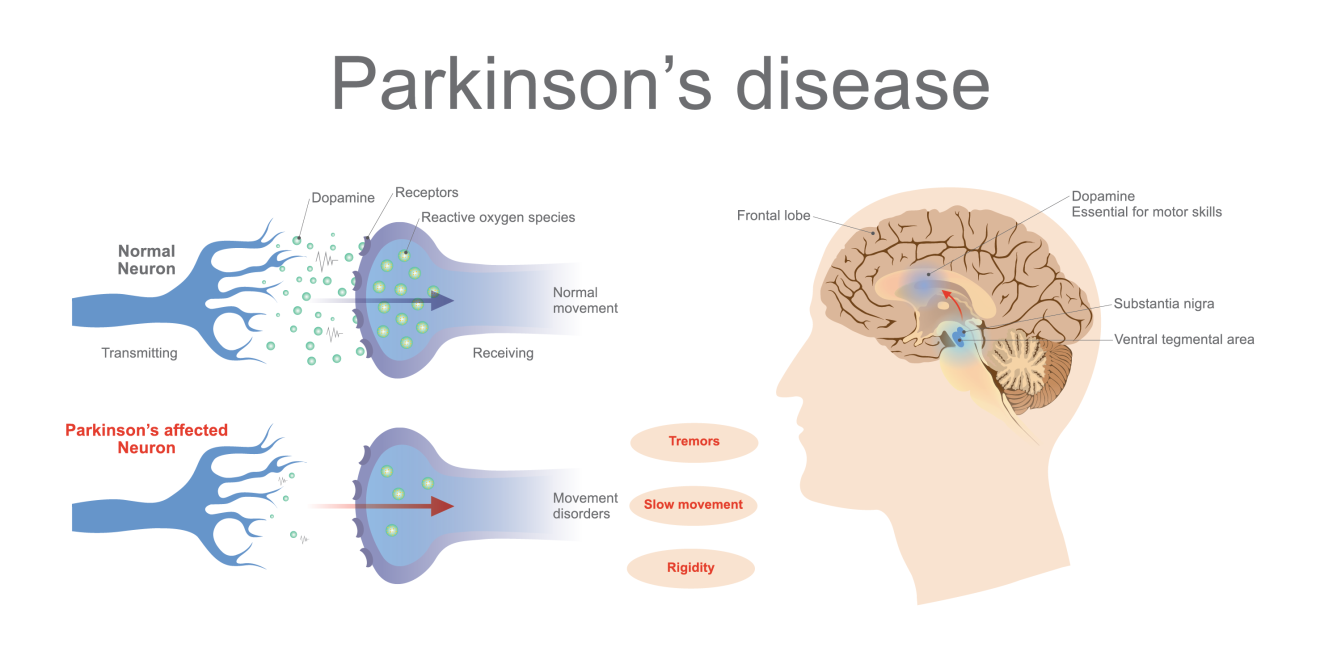 Parkinson’s disease is a neurodegenerative disease that manifests as a movement disorder. The main features of Parkinson’s disease are a progressive loss of muscle control leading to trembling of the head and limbs at rest, slowness, stiffness, and impaired balance. As symptoms worsen, it becomes difficult to talk, walk and complete simple tasks.

The progression of the disease and the degree of injury differ from person to person. Many persons with Parkinson’s disease may live long, productive life, while others become disabled more quickly.

Complications of Parkinson’s are pneumonia or injuries due to falls leading to premature death of the person. The life expectancy of people with and without Parkinson’s disease is about the same as the general population.

Historically, Parkinson’s disease was reported 5000 BC ago in the ancient Indian civilization. It was known as Kampavata and was treated with plant seeds which have therapeutic levels of levodopa. Parkinson’s disease is named after James Parkinson, a British doctor, who first described the disorder as “shaking palsy.”

Stage 1: Mild signs and symptoms. For example, while walking there is a swinging arm or tremors occur on one side of the body, and it does not interfere with daily activities.

Stage 2: Both sides of the body are affected, and symptoms worsen. Though the individual is able to perform daily activities, symptoms may interfere with walking and posture.

Stage 3: Symptoms are significantly worse. It cause slowness of movement, loss of balance and increase the frequency of falls.

Stage 4: Symptoms are severe and the patient requires help as it is impossible for the person to live alone.

Stage 5: The person is unable to walk or stand, and sometimes bedridden do have hallucinations and delusions.

The primary symptoms usually start on one side of the body and are related to voluntary and involuntary motor function. Mild symptoms are present in the beginning and will improve over time. By the time that primary symptoms appear, individuals with Parkinson’s disease will have lost 60% to 80% or more of the dopamine-producing cells in the brain. Most of the important motor symptoms include the following:

Other symptoms of Parkinson’s disease

The foremost symptoms of Parkinson’s disease are a progressive loss of muscle control. Damage to the brain leads to secondary symptoms. These vary in severity, and not every individual will experience all of them. The symptoms usually start on one side of the body;

Some of the secondary symptoms include

The risk factors for Parkinson’s disease are :

A neurologist is required to make an accurate diagnosis. An initial assessment is done based on the history, a neurological examination, and the symptoms. In the medical history, it is essential to know if any family member is suffering from the disease, intake of any medication and was there any exposure to toxins or traumatic brain injury. A neurological exam helps in the evaluation of walking, coordination and fine motor tasks involving the hands.

Tests are used to measure behavior, mental capacity, daily living activities, and mood and motor functions. They are useful in initial diagnosis and to rule out any other disorders, as well as in monitoring the progression of the disease to make therapeutic adjustments. Brain scans and other laboratory tests are used to detect other disorders similar to Parkinson’s disease.

The diagnosis of Parkinson’s disease is done if

There is no cure for Parkinson’s disease currently, but treatments are available to help reduce the symptoms & maintain quality of life.

The person may not require any treatment during the early stages of Parkinson’s disease as symptoms are usually mild. However, the person may need regular appointments with a specialist so that condition can be monitored.

A care plan should be developed with the healthcare team and the patient’s family. The plan will outline the treatments and what are likely needs in the future and should be reviewed regularly.

Physiotherapy: A physiotherapist can help to reduce muscle stiffness & joint pain through movement (manipulation) and exercise. The physiotherapist aims to make moving easier & improve your walking & flexibility. They also try to increase the fitness levels & ability to manage daily chores.

Occupational Therapy: An occupational therapist can identify areas of difficulty in everyday life – for example, dressing or getting to the local shops. They can help to work out practical solutions like ensuring that the home is safe & properly set up for the person. This will help maintain the person’s independence for as long as possible.

Speech & Language Therapy: Many people with Parkinson’s disease have swallowing difficulties (dysphagia) and problems with their speech. A speech & language therapist can often help to improve these problems by teaching speaking & swallowing exercises, or by providing assistive technology.

Diet Advice: For some people with Parkinson’s disease, making dietary changes can help improve some symptoms. These changes can include:

The person may need a dietitian: a healthcare professional trained to give diet advice and may benefit from modifying your diet.

Medications are used to improve the main symptoms of Parkinson’s disease like shaking & movement problems.

However, not all the medications available are useful for everyone & the short- and long-term effects of each are different. Three main types of medicines are used:

Your specialist can explain your medication options, including the risks associated with each medication & discuss which may be best for you. Regular reviews will be required as the situation progresses & your needs change.

They also reduce the side effects of levodopa, which include:

If the person is prescribed levodopa, the initial dose is usually small & will be steadily increased until it takes effect. At first, levodopa causes a dramatic improvement in the symptoms. However, its effects can be decline over the following years as more nerve cells in the brain are lost. This means the dose may need to be increased from time to time.

Long-term use of levodopa is also connected to problems such as uncontrollable jerky muscle movements (dyskinesias) & “on-off” effects, where the person rapidly switches between being able to move (on) & being immobile (off).

Dopamine agonists act as a replacement for dopamine in the brain & have a similar but milder effect compared with levodopa. They can often be given less often than levodopa. They are usually taken as a tablet but are also available as a skin patch. Sometimes dopamine agonists are used at the same time as levodopa, as this allows lower doses of levodopa to be used.

Possible side effects of dopamine agonists include:

Dopamine agonists can also cause hallucinations & increased confusion, so they need to be used with caution, particularly in elderly patients, who are more sensitive.

For some people, dopamine agonists have been associated with the development of compulsive behaviors, especially at high doses, including addictive gambling & an excessively increased libido.A potentially serious but uncommon, complication of dopamine agonist therapy is sudden onset of sleep. This happens as the dose is being increased & tends to settle once the dose is stable. People are usually informed to avoid driving while the dose is being raised in case this complication occurs.

As the person themselves may not realize the problem, it is necessary that carers & family members also note any abnormal behavior & discuss it with an appropriate professional at the earliest opportunity.

If the person is given a course of dopamine agonists, the starting dose is usually very small to prevent nausea & other side effects. The dosage is progressively increased over a few weeks. If nausea becomes a problem, the general physician may prescribe anti-sickness medication.

They block the enzyme that breaks down dopamine (monoamine oxidase-B), increasing dopamine levels.

Both selegiline & rasagiline can improve the symptoms of Parkinson’s disease, although their effects are small compared with levodopa. They can be used along with levodopa or dopamine agonists.

MAO-B inhibitors are very well tolerated, but can occasionally cause side effects, including:

A dopamine agonist called apomorphine can be injected under the skin (subcutaneously) either by:

If the person has severe on-off fluctuations, a type of levodopa called Duodopa may be used. The medication comes as a gel that is continuously pumped into the gut through a tube inserted through the abdominal wall.

Most people with Parkinson’s disease are treated with medication, although a type of surgery called deep brain stimulation is used in some cases.

Deep brain stimulation involves surgically implanting a pulse generator similar to a heart pacemaker. This is linked to one or two fine wires placed under the skin & are inserted precisely into specific areas of your brain. A tiny electric current is generated by the pulse generator, which runs through the wire & stimulates the part of your brain which is affected by Parkinson’s disease. Though surgery doesn’t cure Parkinson’s disease, it can ease the symptoms for some people.

1) What are the stages of Parkinson’s disease?

Stage 1: mild signs (movement symptoms while walking there is a swinging arm or tremors ) occur on one side of the body, and it does not interfere with daily activities.

Stage 2: Both sides of the body are affected, and symptoms worsen.

Stage 3: Symptoms worsen with the slowness of movement and loss of balance.

Stage 4: symptoms are severe and require help as it is impossible for the person to live alone.

Stage 5:  The person is unable to walk or stand, and sometimes bedridden.

2) What is the treatment for Parkinson’s disease?

Medications, surgery and physiotherapy can control symptoms of Parkinson’s disease

3) Is Parkinson’s a fatal disease?

Though Parkinson’s disease (PD) reduce longevity, it is not fatal a condition.

5) What are the risk factors for Parkinson’s disease?

Risk factors for Parkinson’s disease include age, heredity, sex and exposure to toxins.