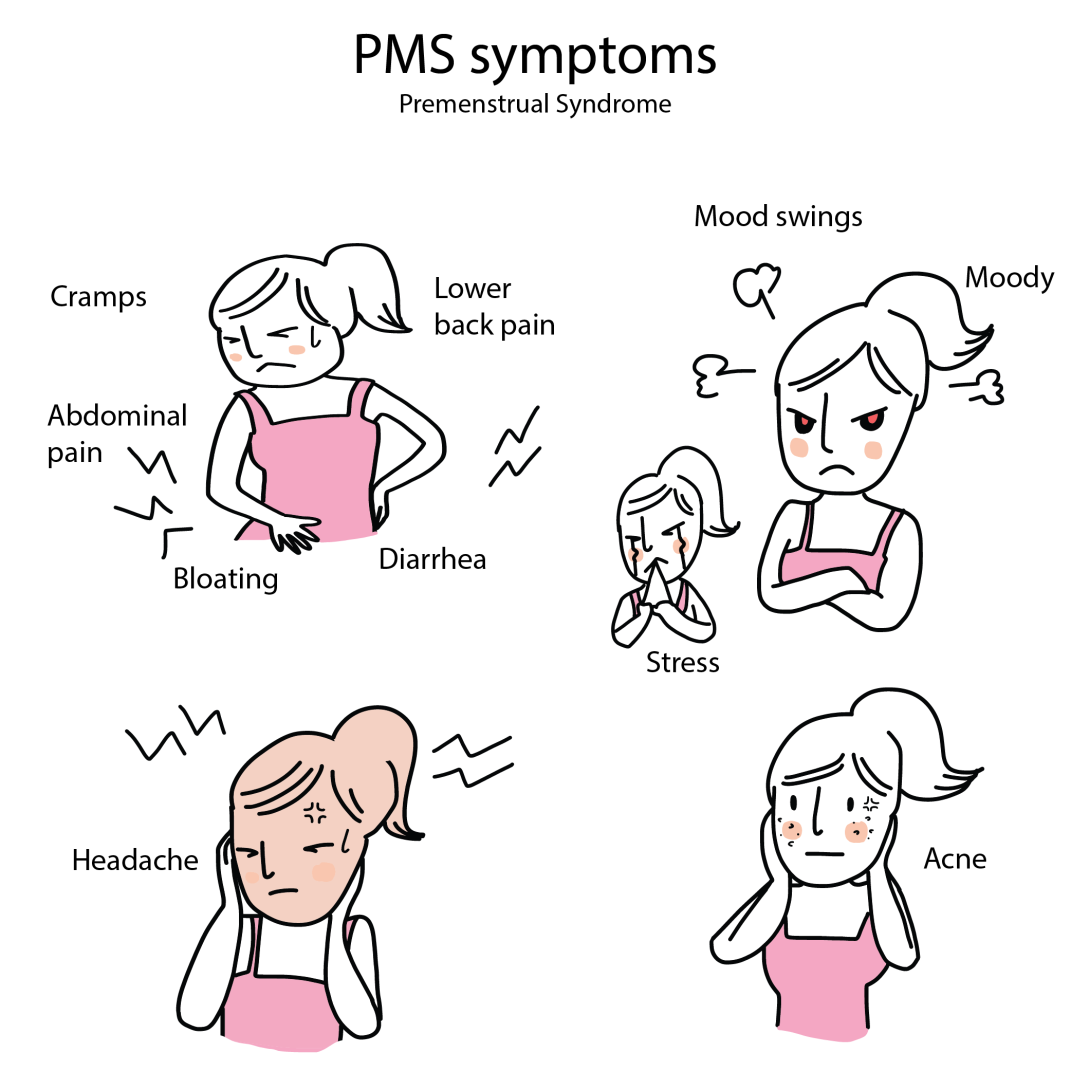 Pre menstrual syndrome (PMS) is a condition in women that starts five to eleven days before menstruation and lasts until after menstruation. It is a combination of physical, emotional, psychological and mood disturbances that usually end with the onset of menstrual flow. The mood-related symptoms that commonly occur are depression, oversensitivity, crying, irritability, and mood swings. The physical symptoms are fatigue, bloating, breast tenderness (mastalgia), acne, and appetite changes associated with the craving for food. Premenstrual dysphoric disorder (PMDD) or late luteal phase dysphoric disorder, is a more severe form of PMS, known to occur in some women and leads to significant loss of function. Unusually severe symptoms like irritability, anger, anxiety or tension are particularly prominent.

About 90% of women at some point in their lifetime have premenstrual symptoms. It is estimated that 20% to 30% of women have clinically significant PMS, i.e., moderate to severe in intensity affecting the woman’s functioning. A more severe form of PMS occurs in the 4th decade of life and 3% to 8% of women are known to have this condition.

The exact cause of premenstrual syndrome (PMS) is not known. A combination of many factors contributes to the symptoms.

Premenstrual syndrome (PMS) vary every month and from person to person. There are many different symptoms of PMS. The PMS symptoms may be similar or vary every month in intensity. Slightly different symptoms occur every few months. For every woman, the symptoms are different. The symptoms of PMS may happen in the menstrual cycle each month at the same time. It can happen two weeks before menstruation begins. Symptoms start to improve as the period is about to start and disappear once the period begins.

Many women with PMS have severe symptoms. Some symptoms are severe enough to prevent them living their usual lives. This type of PMS the result is more intense and is known as premenstrual dysphoric disorder (PMDD). The symptoms of PMDD are similar to those of PMS, but are more blown up and has more physical symptoms than psychological symptoms

Woman with PMDD may usually have suicidal thoughts. Depression is a common symptom of PMDD. PMDD is very difficult to deal with as it has a negative effect on the daily relationships and life.

The diagnosis is done based on more than one recurrent symptom like mood swings and physical pain that is severe enough to cause impairment and is absent between menses and ovulation. The doctor will rule out other causes like anemia, thyroid disease, endometriosis, irritable bowel syndrome (IBS), chronic fatigue syndrome, connective tissue or rheumatologic disorder.

Treatment for premenstrual syndrome (PMS) helps to manage the symptoms that interfere with the daily life.

In mild to moderate types of PMS, changes are done to diet and lifestyle before medical treatment.

If PMS symptoms are a severe or premenstrual dysphoric disorder (PMDD) is diagnosed with medical treatment can be used.

Medical treatments for PMS are:

How long before your period does one have PMS?

The average duration of a menstrual cycle is 28 days. Ovulation occurs on the 14 of the cycle. Menstruation, or bleeding, occurs on day 28 of the cycle. PMS symptoms can begin around day 14 and last until seven days after the start of menstruation.

Who can develop premenstrual dysphoric disorder?

Premenstrual dysphoric disorder (PMDD) is a severe, form of premenstrual syndrome (PMS). Although PMDD and PMS have both emotional and physical symptoms, PMDD leads to extreme mood shifts that disrupt the work and damage relationships.

Apollo Hospitals has the Best Obstetrician & Gynecologist n India. To find the best  doctors in your nearby city, visit the links below:
www.askapollo.com/physical-appointment/gynecologist