HomeApollo in NewsA Businessman was on the Verge of a Heart Attack. He Prayed...
Apollo in NewsHealth A-ZCardiology

A Businessman was on the Verge of a Heart Attack. He Prayed for Divine Intervention, and he got something close – Robotic Intervention! 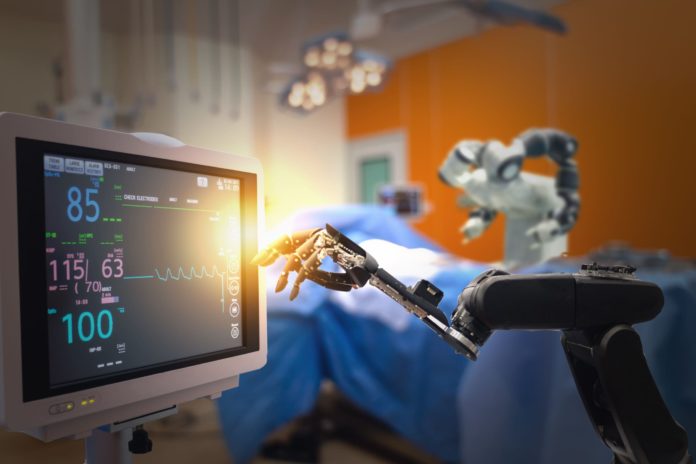 Anil, a 53-year-old businessman, was driving to a shopping mall with his family one fine Saturday evening. This was the second mall they were visiting this day. It was the middle of the festive season, and Anil had been tied up with work calls all afternoon. And now, he was in the middle of snarling traffic heading towards another packed mall.

With all the work stress,  coupled with constant travel and carrying around heavy shopping bags, Anil began to feel a little overwhelmed. He noticed he was also experiencing tiredness and sudden shortness of breath. He thought this could be because of his overweight frame and all the walking and stress that was getting to him, maybe making him feel more tired than usual. Or it could be diabetes-induced fatigue as he was diabetic as well. After a short rest, Anil continued as if everything was normal. After close to an hour, as Anil was parking his car in the mall, he started feeling a tightness in his chest and a tingling sensation running up his arms.

Anil knew something was wrong, and he immediately told his wife, who called Apollo Hospitals without delay. Anil was swiftly taken to the hospital and admitted to the emergency room. Anil suspected he was experiencing a heart attack, and what worried him the most was how his diabetic condition might complicate the treatment.

What did Anil and his family do right?

Anil’s wife made the right decision by admitting him to Apollo Heart Institute. With more than 500 cardiologists and 200 cardiothoracic surgeons working across the country, Apollo Heart Institute has the largest Cardiovascular team in the world with a combined experience of more than 10,000 years! Anil’s wife instinctively knew that a hospital like Apollo would have more experience treating patients with existing ailments like diabetes and hypertension. Armed with the latest in heart care, such as the robot-assisted Minimally Invasive Cardiac Surgery (MICS), Apollo Hospitals represented the best chance for Anil to make a full recovery and resume a normal life with his family. Having advanced facilities, including all the necessary experience and expertise, Anil’s family made the right choice for him – giving him the best shot at getting through this crisis by bringing him to Apollo Heart Institute.

As the name suggests, Minimally Invasive Cardiac Surgery (MICS) is a surgical procedure that involves making small keyhole incisions and inserting a tiny tube with a camera attached at the tip, rather than cutting through the breastbone, as is done in traditional open-heart surgery.

Primarily used to avoid traditional open-heart surgeries, MICS is also known as ‘Keyhole surgery’ due to the keyhole size of the incisions made, through which the surgical procedure is performed.

The advantages of MICS over traditional open-heart surgeries are:

How did Anil prepare for his MICS treatment?

After conducting an angiogram (a diagnostic procedure used to detect blockages in arteries and veins), Anil’s doctor found that Anil had plaque built up in his artery, which was causing him chest discomfort (pain) and shortness of breath. The Cardiologists at Apollo Hospital’s renowned Cardiology department, in turn suggested performing a MICS procedure at the earliest.

Anil was wary of surgery due to his pre-existing diabetes. He knew that the chances of complications in diabetic patients were higher from the various sources that he had referred to online. He voiced his concerns to his surgeon, and he was relieved that the procedure which was to be performed upon him had significantly lesser complications caused by existing medical conditions due to the non-invasive nature of the procedure. Anil’s surgeon also told him that this surgery would be assisted by a robotic arm, which completely vastly reduces the chances of human error and substantially improves precision and surgical performance.

On hearing this, Anil felt much better and significantly more confident about undertaking the surgery.

How did the robotic-assisted procedure help Anil’s surgeon treat his heart condition?

Before prepping for the procedure, Anil’s surgeon explained how the procedure would be performed and how  robotic assistance would help during the surgery.

A robot-assisted heart surgery involves the surgeon using robotic arms, rather than his/her hands, to perform the exact surgical manoeuvres that’s used in traditional open-heart surgery. During this procedure, the surgeon works at a remote console and views the patient’s heart through a magnified high-definition 3D view on a video monitor. From the console, the surgeon’s hand movements translate precisely to the robotic arms at the operating table, which operates identically to the human wrist.

A second surgeon and surgical team assists at the operating table, changing surgical instruments attached to the robotic arms.

With Apollo’s robotic assisted MICS, cardiologists at the Institute were able to:

How did Anil find his post-operative recovery after MICS?

After the surgery, Anil was taken to the ICU, where the surgical team kept him under observation. Due to the non-invasive nature of the procedure, Anil was able to recover quickly and was moved to a regular hospital room within a day itself.

In the hospital room, Anil was able to meet his family and relatives, and he told them about how the surgery went and was relieved that his diabetes did not cause any issues with the procedure. In sheer excitement, he explained how robotic assistance benefited his surgeon greatly in performing the procedure, and at no point in time of the procedure, was he scared.

After one more day in the hospital room, Anil was discharged from the hospital and was able to return to his home with his family. His surgeon prescribed medication to help Anil fully recover from the surgery and suggested subscribing to the Apollo ProHealth program so that he and his family could avoid such health scares in the future and take effective preventive steps.

At Apollo Hospitals, we believe cutting-edge technology can help us save people’s lives, and with robotic-assisted surgery, patients like Anil have a better chance at living a normal, fulfilling life with their families, and at the same time minimize the risk of any life-threatening conditions after major surgery. In this instance, Anil benefitted from a MICS procedure that was handled by a surgeon but surgically performed by a robot.

Verified By Apollo Cardiologist
https://www.askapollo.com/physical-appointment/cardiologist
The content is reviewed and verified by our experienced and highly specialized team of heart specialists who diagnose and treat more than 200 simple-to-complex heart conditions. These specialists dedicate a portion of their clinical time to deliver trustworthy and medically accurate content
Facebook
Twitter
WhatsApp
Linkedin
Previous articleRamsay Hunt Syndrome (RHS) – Symptoms, Causes And Treatment
Next articleThis Medical AI Program is Saving lives! Here’s why you need to read this right now
RELATED ARTICLES
Apollo in News