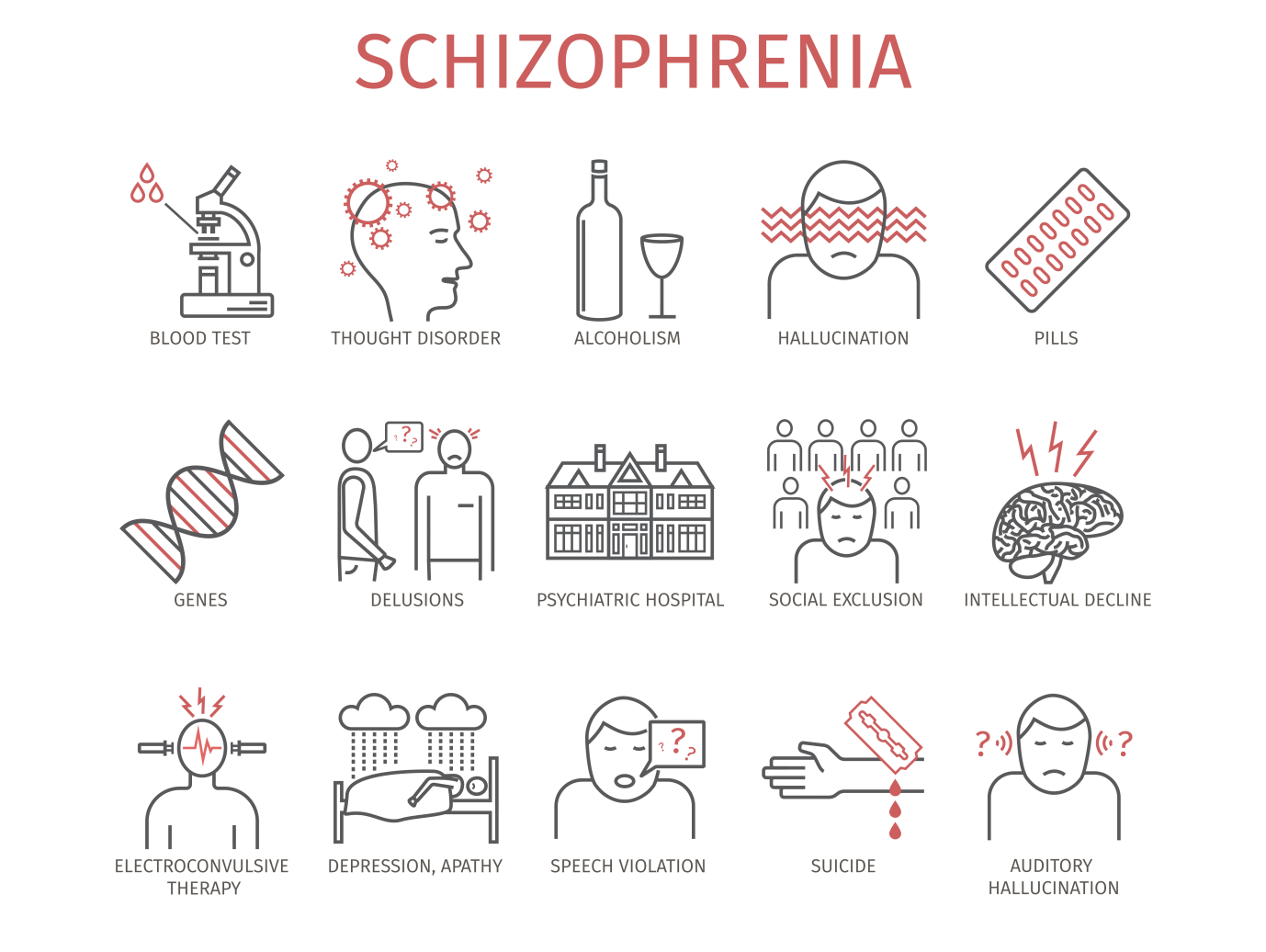 Schizophrenia is a mental illness characterized by abnormal social behaviour and inability to understand reality. Symptoms of schizophrenia include confused thinking, hallucinations, false beliefs, lack of motivation and decreased social life. Mental health issues like anxiety and depression are common in individuals with schizophrenia. Often, schizophrenic patients are prone to substance abuse.

A person who is schizophrenic has confusing thoughts, see images of things that are not there, hear sounds which are not present in reality and lose touch with reality. It is a common disorder that can attack anyone and at any age.

Schizophrenia is a chronic mental disorder and requires lifelong treatment. A person who is schizophrenic might experience the symptoms in episodes or constantly. The causes include environmental factors as well as genetic factors. Environmental factors like being raised in a city, use of drugs like cannabis during adolescence, the presence of infections, parental age, nutrition deficit during pregnancy, etc. play a major role.

A variety of genetic factors and family history also cause schizophrenia. A few social factors like long-term unemployment and poverty also play a role in schizophrenia.

As per many statistical reports of 2017, about 1% of the general population has schizophrenia. On average, males are more prone to schizophrenia than females and they are also likely to experience symptoms more severe than females. Most patients do not recover completely. About 20% of cases that seek help are likely to do well.

The causes of schizophrenia are not defined specifically. However, it is said that there could a mix of factors. They include –

With these being the causes of schizophrenia, there are many factors that trigger the disorder or worsen symptoms. Stress is a major triggering factor. Change in social and economic status of a person could also make him prone to schizophrenia. Loss of job, development of other diseases/conditions, loss of loved ones, and other changes can also trigger schizophrenia.

Not every person with schizophrenia experiences the same signs and symptoms. Some may develop symptoms gradually while others might have an abrupt display of symptoms. Attacks of schizophrenia occur in cycles of remission and relapse.

While prominent symptoms occur much later, many individuals show early signs of schizophrenia.

A few behaviours that are early signs signaling schizophrenia include:

Symptoms of schizophrenia could be categorized into two

These are the disturbances that come as an “addition” to a person’s personality. These include:

These are the capabilities that are “lost” from a person’s personality.

Some symptoms to look for in teenagers include:

As there is no definite cause of schizophrenia, the risk factors cannot be accurately estimated.

Some of them include:

A mental health professional will assess the patient to evaluate the symptoms being experienced by him. There is no objective test to diagnose schizophrenia however certain tests could be ordered to rule out other illnesses and conditions. A doctor will have to exclude possible conditions like bipolar mood disorder, in order to confirm schizophrenia in a person. The doctor should also make sure that the symptoms are not a result of drug usage, medication or other medical condition.

A patient must have at least two typical symptoms from the following:

Physical Examination: This is done in order to rule out other underlying health conditions before confirming a mental health disorder.

Screening: A screening procedure for alcohol and drugs is done to rule out the causes. Imaging studies like MRI or CT scan could also be ordered for.

Mental Evaluation: A mental health professional observes the appearance of the person, his mood, thoughts, delusions, hallucinations, drug use, suicidal thoughts etc. including a discussion of family and personal life.

Proper medical help and guidance from professionals can result in a better, long-term outcome for patients. No cure exists for schizophrenia. Proper treatment can help a person lead a productive and fulfilling life. People who seek medical help at an early stage of the condition improve faster and can lead a regular life.

Recovery from schizophrenia can be possible through various means which include medication and rehabilitation. While medication helps in the management of the condition, rehabilitation usually plays a major role in getting back the confidence and skills a person needs to lead a productive life in the community.

Antipsychotic drugs come with mild side effects like dry mouth, drowsiness, constipation, quitting-smoking, dizziness, blurred vision, etc. These side effects often fade away in a few weeks. Severe and rare side effects include facial tics, and loss of muscle control.

There are no studies that suggest actions that could prevent or delay the onset of this condition. Some studies show that early use of medication and intervention to be beneficial for the patient. In individuals who are at high risk, cognitive behavioral therapy could reduce the risk of psychosis later on in life. Avoiding drugs and substance abuse could be one way of preventing schizophrenia. Regular exercise has also proven to have a positive effect on the physical and mental health of those with schizophrenia.

How does schizophrenia begin?

Hallucinations and delusions are the primary symptoms of schizophrenia in most cases. They are likely to show up between ages 16 to 30.

Can Schizophrenia be cured?

Schizophrenia is a chronic mental illness. Though it cannot be cured completely, it can be managed with the help of therapy and medication.

Is schizophrenia a split-personality disorder?

No. Schizophrenia is completely different from split-personality disorder.

Are people with schizophrenia dangerous?

In most cases, patients are not violent and hence are not dangerous.

What are the four types of schizophrenia?

In the past, schizophrenia had subtypes called paranoid, disorganized, catatonic, childhood and schizoaffective.

Overview : Diabetes is a chronic disease that damages blood sugar regulation in our body. While both women and...
Read more