HomeHealth A-ZSeizures: Causes and What You Can Do to Prevent Them
Health A-ZNeurology

Seizures: Causes and What You Can Do to Prevent Them 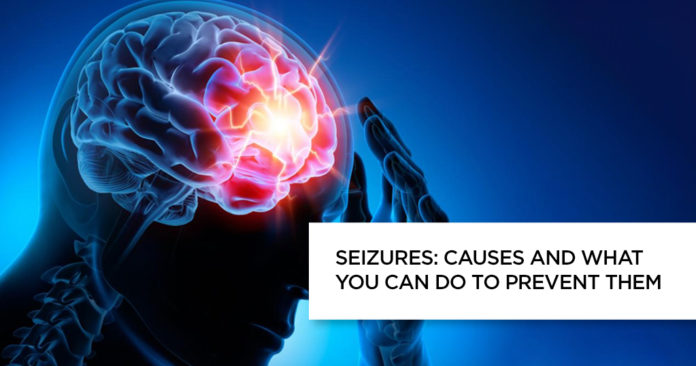 A seizure is a sudden, unusual electrical activity in the brain. It may go unnoticed or may lead to convulsions, altered consciousness levels, and changes in behavior. Usually, seizures last between 30 seconds to 2 minutes. However, if you experience two or more attacks or have a history of repetitive seizures, you might have epilepsy.

Seizures may strike after a head injury, stroke, meningitis, or other medical emergencies. Patients experiencing this issue for more than 5 minutes need immediate medical attention. With the advancement in medicine, now it is possible to manage seizures with timely treatment. However, it may significantly impact your life. Therefore, appropriate care needs to be taken for a stress-free living.

Seizures can be focal or generalized, depending on the site of origin in the brain. Check out the various subtypes of this nervous disorder.

When the seizure develops due to an abnormal electrical activity only on one side of the brain, doctors term it a focal seizure. Different types of focal seizures include:

In this type of seizure, some patients do not retain their consciousness. They can stare into space or perform repeated motions, like walking in circles, chewing unnecessarily, and rubbing hands.

• Focal seizures without loss of consciousness

Here, though patients experience sensory function changes like an altered sense of smell, taste, feeling, or transformed emotional state, they retain their awareness. In many cases, sufferers show involuntary jerking of arms and legs. They may even experience tingling sensations, dizziness, and observe flashing lights.

Patients may confuse focal seizures with other neurological issues, like narcolepsy, mental illness, and migraine.

In generalized seizures, all areas of the brain get impacted due to abnormal electrical impulses. Similar to focal seizures, they also have various subtypes.

The absence seizure was initially known as petit mal seizure. They usually occur in children, producing subtle body movements like repeated blinking of eyes, lip-smacking, or staring into space. Patients may experience a brief loss of consciousness while undergoing this neurological disorder.

Patients experiencing tonic seizures complain of stiffening of back, arms, and legs muscles. They may topple off the ground while having these attacks.

Atonic seizures are also known as drop seizures as victims may lose balance and suddenly collapse to the ground. They lose control of muscles in this nervous disorder.

Myoclonic seizures cause sudden jerks or twitches in the hands and legs.

Tonic-clonic seizures were initially termed as grand mal seizures, as victims experienced a dramatic and sudden loss of awareness. They demonstrated stiffening and shaking of body parts, biting the tongue, and even losing bladder control most common types of seizures.

The signs and symptoms of seizures

The signs and symptoms of a seizure depend on the type of neurological disorder experienced by the patient. They include:

• Spell of staring into space.

• Collapsing to the ground.

When to see a doctor for seizures?

It is better to seek medical attention if you are experiencing seizures which:

• Last for more than 5 minutes.

• Associated with a high fever.

• Difficulty in breathing and regaining consciousness even after the seizure stops.

• Occurs in diabetic and pregnant individuals.

• Experiencing an injury during the seizure.

It is also a good idea to anyway consult a neurologist if you experience a seizure for the first time.

Book an Appointment with Our Neurologist

What are the causes of seizures?

Millions of neurons (nerve cells) in the brain remain involved with the creating, transmitting, and receiving electric impulses. These activities help neurons to communicate with each other and control the activities of an individual. However, during a seizure, the communication pathways between the nerve cells get disrupted. They witness an unusual electric impulse in the brain. In most cases, these attacks develop due to epilepsy. However, it is worth pointing out that every individual experiencing a seizure may not be epileptic.

Seizures may even occur due to:

• Head injury and bleeding in the brain.

Can seizures cause any complications?

Complications of seizures include:

• Injury: Patients often injure their heads or fracture their bones because of collapsing during a seizure.

• Drowning: There is a high risk of drowning if a seizure patient experiences an attack while bathing or swimming.

• Car accidents: Seizures can lead to automobile accidents if a victim losses awareness while driving.

• Pregnancy-related complications: Expecting mothers pose a high risk to themselves and the baby if they experience bouts of seizures during the pregnancy.  Some anti-epileptic medicines enhance the probability of congenital deformities; hence medication must be administered with caution.

• Depression: Anxiety and depression increase due to seizures.

What can you do to prevent seizures?

It is possible to manage the preventable causes of seizures by limiting alcohol consumption and staying away from recreational drugs.

What are the diagnostic tests for seizures?

Doctors may prescribe the following diagnostic tests for detecting seizures.

What are the treatment options for seizures?

The treatment practices for seizures reduce the future occurrence of the abnormal electrical impulses in the brain with minimized side effects. Neurologists try various approaches for managing seizures, including medication, surgery, and therapies.

Finding the best medication for managing seizures is a complicated process. Neurologists assess your medical history, age, associated medical conditions, and complications before selecting the correct drug. They also try to find medicines with minimum side-effects.

If seizure medications fail to provide satisfactory results, doctors try out surgical procedures to manage the symptoms. They include:

Surgeons detect the part of the brain associated with seizures and surgically remove the neurons from the spot. This practice is beneficial if seizures originate at a single site in the brain.

Here, doctors surgically implant a medical device under the chest region. It stimulates the vagus nerve in the neck and transmits impulses to the brain to prevent seizures. However, patients need to continue with their regular seizure medications even after this implant. Doctors may reduce the dose after assessing the current risk of attacks.

In responsive neurostimulation, doctors implant a device on the brain’s surface or within the neurons. It detects abnormal electrical activity in the brain and also transmits stimulation to prevent them in the future.

In deep brain stimulation, neurologists implant electrodes in specific areas of your brain to generate electrical impulses and manage the unusual brain activity. A pacemaker-like device, placed under the chest’s epidermis controls the electrodes’ stimulation, as they remain connected together.

You may also follow a diet chart consisting of high fat and low carbohydrate foods to prevent seizures. This type of diet is known as a ketogenic diet, and it has proved helpful in many patients. Dietitians also recommend a modified Atkins diet for limiting seizures as it is less restrictive than the keto diet.

You can avoid injuries during seizures by considering the following protective measures:

If you experience seizures, seek immediate medical attention. Take the help of your family members to describe the symptoms if you lose consciousness during the attack. It will help in the correct diagnosis and initiation of suitable treatment strategies.

1. What are the imaging tests for diagnosing seizures?

2. Is it possible for seizure patients to have a healthy pregnancy?

Yes, seizure patients can also undergo a healthy gestation and give birth to a healthy baby. However, consult your doctor about the doses of seizure medicines during pregnancy. There are chances of congenital deformities like spina bifida due to the side effects of some of the drugs. You physician will prescribe alternative medicine to take care of the condition. Consult a neurologist before planning for pregnancy.

3. What are the lifestyle remedies for seizures?

Engage in physical activities and exercises, get adequate rest, and follow a healthy diet chart consisting of ketogenic or modified Atkins food to limit the chances of suffering from seizures. You may also consider wearing a medical alert bracelet to make medical personnel aware of your health emergencies.

Book an Appointment with Our Neurologist