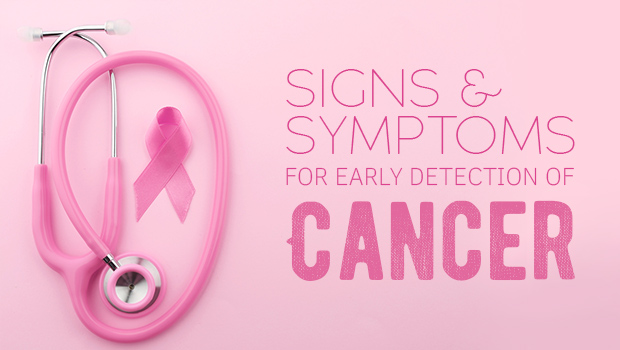 The number of cancer cases is increasing alarmingly in India. Recent Globocan data shows that over 1157294 new cases are detected in a year in India, with the most commonly detected cancers being breast, oral cavity, skin cancer uterine cervix, lung, esophagus, colon cancer stomach and colorectal. Whereas we all know early detection is the key to the cure of this disease, often the warning signs and symptom are missed.

Here are a few signs and symptoms which may alert you to see a doctor :

Breast: Lump in the breast which is often painless, increasing in size, bloody discharge from the nipple, swelling or lump in the armpit.

Lip and oral cavity: any persistent non-healing ulcer in the lip or mouth, reduced the ability to open mouth, reddish and whitish patches in the mouth mainly in tobacco chewers and smokers, difficulty in swallowing, persistent voice change.

Other cancers: Other common cancers are ovarian cancer in females, prostate cancer in males, kidney and urinary tract cancers, lymphomas and brain tumors.

Prostate: with increasing life expectancy, prostate cancer is increasing in elderly males, Urinary symptoms like incomplete voiding, hesitancy, dribbling of urine, feeling of urgency and inability to hold the urine, repeated urge of urination in the night can be some of the symptoms of prostate cancer, though the cause may also be benign.

Blood in the urine may be a symptom of the urinary tract or kidney cancer which should be evaluated by a specialist.

There is a type of cancer which affects the lymphatic system and the lymph nodes called lymphoma which may be presented as swelling in the neck, armpit, groin or any other part of the body sometimes accompanied by fever and sweating in the nights.

Brain tumors are also increasing in number which may be presented as sudden onset seizure, headache, weakness in any part of the body, balance problem, a problem with the vision or dual vision.

The best approach to detect and treat cancer early would be to be alert and seek medical advice should any of the above symptoms occur. Annual screening for cancers through health checks would also be a good way to detect cancer early. The earlier the detection, the better the chances of complete cure.

Our dedicated team of experienced Oncologists verify the clinical content and provide medical review regularly to ensure that you receive is accurate, evidence-based and trustworthy cancer related information