The Facts about Silent Stroke 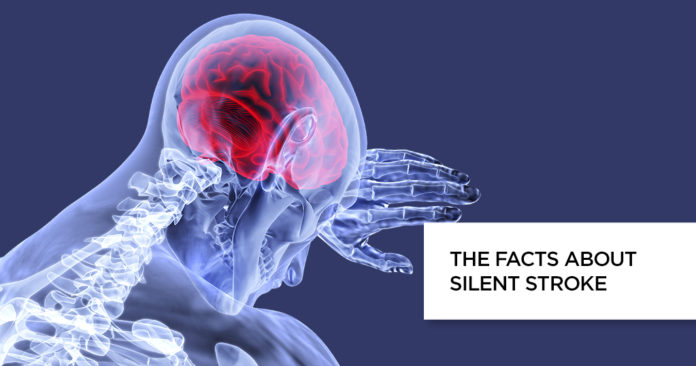 You had a stroke, but shockingly, you do not know about it. Is it even possible? Yes, a silent stroke is such where you unknowingly suffer a stroke. But, you either cannot remember anything about it or are completely unaware of it.

When it comes to describing strokes, we generally think of the causative signs and symptoms. It includes numbness, blurry vision, mumbled speech, and facial paralysis, or body paralysis. However, a person does not experience any symptoms in a Silent Stroke at all. Therefore, the name – Silent Stroke or asymptomatic cerebral infarction.

Similar to ischemic brain strokes, silent strokes occur when a portion of your brain suddenly stops receiving blood. It stops oxygen supply to the brain, causing considerable damage to the brain cells. However, a silent stroke is hard to understand because it breaks the blood supply to that part of your brain that has nothing to do with any of your visible functions, such as with ambulation, seeing, or speaking. Therefore, it goes unnoticed.

So, what about Silent Stroke Diagnosis? In most cases, people get to find out about their stroke only when they undergo a CT scan or an MRI of the brain for any other health condition. That is when a doctor can identify that a small portion(s) of your brain has sustained some amount of damage.

In light of the current scenario due to COVID-19, brain stroke is seen in around 5.9% of coronavirus infected patients. And if you take a look at the neurological complications of COVID-19, you will find that strokes make about 85% of it.

Although there are no visible Silent Stroke Symptoms, and it affects only a small portion of your brain, it does not mean that it is less dangerous or causes less damage. Brain damage due to such asymptomatic strokes is cumulative.

Also, if a person has had several episodes of silent stroke, they may notice the onset of several neurological symptoms, including difficulty concentrating and loss of memory.

As per the American Stroke Association, silent or asymptomatic stroke puts you at the risk of having symptomatic brain strokes later on in your life. Recent studies confirm that if you have had multiple episodes of silent strokes, you are at a higher risk for vascular dementia (multi-infarct dementia). The symptoms include –

● Problems with remembering things or loss of memory.

Silent Strokes – How Are They Different from Other Strokes?

Compared to other types of strokes, such as ischemic strokes, mini strokes, and hemorrhagic strokes, silent strokes are different. Let us take a quick look at the breakdown –

How and When Will You Come to Know if You Have Had a Silent Stroke?

Silent Stroke Diagnosis is not easy. If your doctor ever recommends an MRI or a CT scan of the brain to diagnose any other condition that you may have, you could know that you have had an episode of a silent stroke. The image of your brain will have lesions or white spots on the areas that are affected. The signs and symptoms are so subtle or minute that most people often confuse them with signs of old age . It includes —

Are the Damages of a Silent Stroke Reversible?

When your brain cells suffer permanent damage due to oxygen deficiency, the damages are irreversible. However, in some cases, the healthy areas of your brain counterbalance the functions that are to be done by the damaged part. However, if the episodes of the silent stroke become frequent, your brain’s ability to perform well will eventually decrease.

Is There Any Treatment for Cognitive Issues?

The National Institute of Neurological Disorders and Stroke (NINDS) says if a person has lost some of his/her capabilities due to a stroke, rehabilitative therapy can work. A team of professionals who work together may help you to recover. It includes the following —

What Preventive Measures Can You Take for Silent Strokes?

While it is difficult to identify a silent stroke and even more challenging to recover the regions that have already suffered the damage, all you can do is prevent it. Take a look at the preventive measures given below —

● Most importantly, due to COVID-19 and the new normal norms, stress, and anxiety have taken a toll on our health. Therefore, you should start practicing keeping yourself calm.

● According to a study (2011), exercising (moderate) for at least 30 minutes a day is likely to reduce your risks of silent stroke by nearly 40%.

● According to the American Stroke Association, cutting down your daily sodium intake can reduce your chances of having a stroke. Keep an eye on your cholesterol levels

● High blood sugar is one of the main culprits in the case of most health complications. Keep your blood sugar under the normal range.

● Make sure to eat a sufficient amount of fruits and vegetables.

● Owing to the pandemic and a series of lockdowns and work from home is the new normal, many of you might have put on weight. Try to maintain a healthy weight because being overweight also increases your risk of getting a stroke.

● A recent study shows that consuming sugary, especially artificial-sweetened beverages, can also increase your risks for stroke and dementia.

1. How to know if you have had a silent stroke?

If you had a silent stroke, you are least likely to know it until you take a brain CT scan or MRI. However, your doctor may be able to diagnose it based on any gradual deteriorations in neurological function.

Although silent strokes are asymptomatic, these can lead to permanent brain damage. Moreover, if you get multiple silent strokes, there are chances that you might get more severe strokes in the future.

Facebook
Twitter
WhatsApp
Linkedin
Previous articleMigraine & Stroke – Is there a link?
Next articleYour Risk Factors for a Stroke

All About Allergy Shots

Symptoms and Treatment of Rectal Prolapse