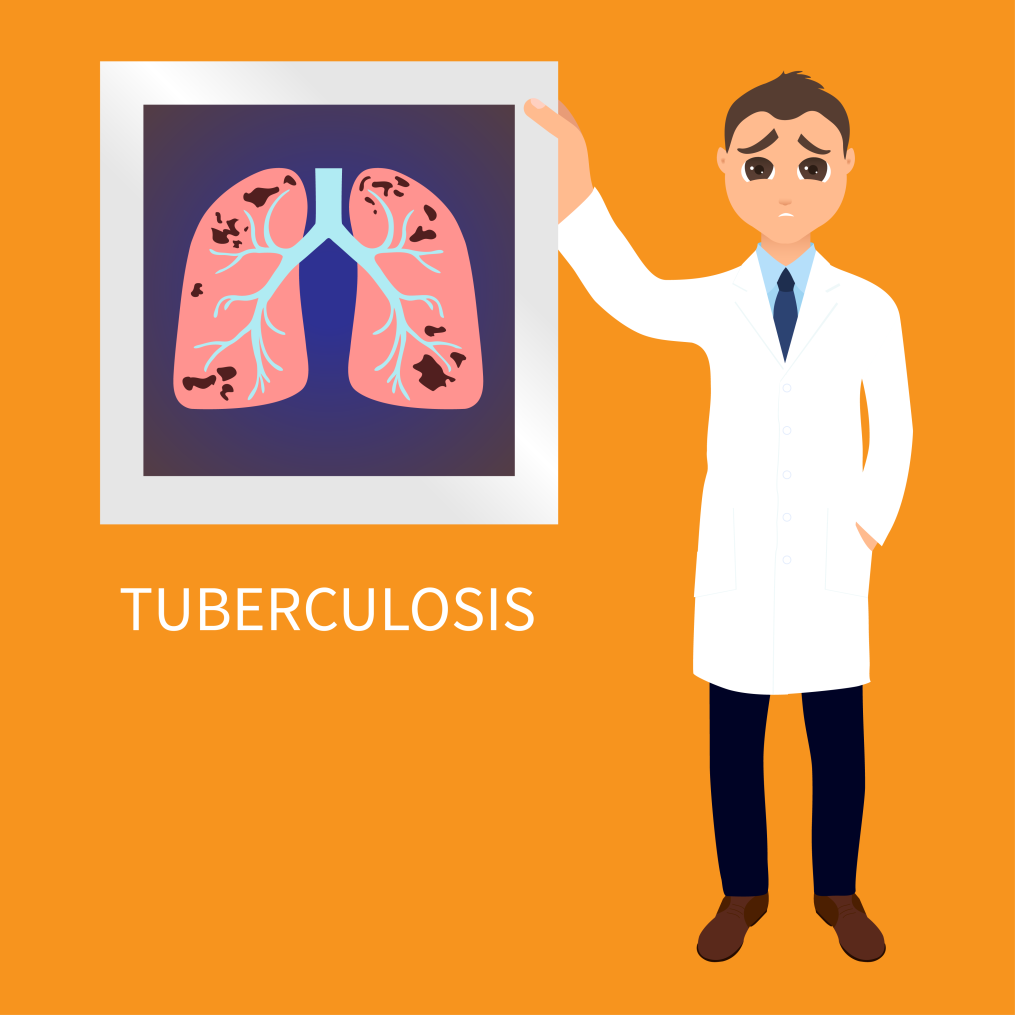 Tuberculosis or TB is an infectious disease caused by the bacteria, Mycobacterium tuberculosis. According to global tuberculosis report given by the World Health Organisation or WHO, TB is the most causes the highest infectious disease-related mortality rate worldwide. It is the ninth leading cause of death worldwide. In 2016, there were an estimated 1.3 million TB deaths among HIV-negative people (down from 1.7 million in 2000). In 2016 out of all the people who fell ill with TB around 90% were adults. 56% of people are living in five countries (India, Indonesia, China, the Philippines, and Pakistan). An estimated 10.4 million people suffered from TB in 2016.

The TB bacterium usually spreads from one person to another through tiny droplets released into the air during coughing and sneezing. These bacteria usually infect the lungs, but can also infect other parts of the body as well, such as the brain, the kidneys or the spine. The source of TB in people with active pulmonary infection. When a person with active pulmonary TB disease coughs, talks, sneezes, sings or laughs, they spread TB. It is a potentially a severe infection which can be cured with the right antibiotics.

You may have to visit a doctor if you have unexplained weight loss, persistent cough, drenching night sweats and unexplained fever. A physician can confirm if you have TB or not by doing specific tests. The symptoms may vary from person to person and are divided into latent and active TB depending on the symptoms expressed in the individuals.

Tuberculosis is an infectious disease caused by the bacteria, Mycobacterium tuberculosis also called tubercle bacilli. It can spread from one person to another person through the microscopic droplets released into the air from an infected individual (active TB). These bacteria are intracellular aerobic, slow growing parasites. They have a unique cell wall which protects it from the body’s defense mechanisms.

The bacteria primarily infect the lungs, but it can spread via blood or lymphatic systems to most organs such as kidneys, and bones (especially those organs that have rich oxygen supply). They can retain certain dyes like fuchsin, a reddish dye even after an acid rinse. The bacteria infect tissue and causes necrosis. These areas have a dry, soft and cheesy appearance.

In patients with HIV infection, the immune system is weak, thus making it more difficult for the body to fight the tubercle bacilli. There are higher chances of progression of the latent infection to active infection in these people.

Few patients are resistant to the two most potent TB drugs (isoniazid and rifampin) and are known to have Multi-drug resistant tuberculosis. This resistance of mycobacteria develops in cases where the patient does not take proper treatment or failure of treatment is seen.

In rare cases, few patients are resistant to rifampin and isoniazid, plus any fluoroquinolone along with at least one of the three second-line drugs such as kanamycin, amikacin, or capreomycin. These patients are known to have XDR tuberculosis (Extensively-drug resistant)

Signs And Symptoms of TB

It is responsible for 85% of TB infections. The classical clinical symptoms and signs of pulmonary TB may include the following

The risk of TB increases when a patient has a weakened immune system. Many risk factors are associated with TB such as

Tuberculosis can be diagnosed by the following tests

The skin test is known as the Mantoux tuberculin skin test (or) the tuberculin skin test (or) TST. This skin test can be done to determine if you are carrying the tubercle bacteria. In this test, 0.1 mL of PPD (purified protein derivative or tuberculin – an extract made from killed mycobacteria) is injected under the top layer of your skin. If there is a welt or induration observed after 2-3 days on your skin, you may be positive. This test does not determine whether you have an active infection but it can tell whether you have been exposed to TB previously or not.

Chest X-ray: If your physician finds that your PPD test is positive, then he may recommend you to have a chest x-ray done. If small spots are observed in your lungs in the chest x-ray, then it may indicate an active TB infection. When your body tries to isolate tubercle bacteria, these spots in the lungs may appear on an x-ray.

Sputum is extracted from deep inside your lungs to check for TB bacteria. If your sputum test is positive, then it indicates that you have an active TB infection and the treatment must be started immediately. Precautionary measures like wearing a special mask, avoiding public areas must be taken to prevent the spread of TB bacteria to others.

The growth of mycobacteria from sputum culture or tissue biopsy culture is the definitive diagnosis of active tuberculosis. The mycobacteria are slow growing bacteria, hence it may take weeks for them to grow on the specialized media.

If you are diagnosed with TB you may have to take one or more medications for six to nine months depending on the type of infection. The treatment for TB depends on,

First-line drugs used are isoniazid (INH), rifampin (RIF), ethambutol (EMB), and pyrazinamide. You’ll be contagious for about two to three weeks into your course of treatment if you’re diagnosed with pulmonary TB. The CDC offers a guide for the basic treatment schedules for active TB (drug-susceptible TB organisms) as follows :

a) In the Initial Phase

b) In the continuation phase

Treatment of drug-resistant and MDR TB can be difficult. Multiple approaches are recommended by the CDC in patients with MDR and XDR TB that involves variable treatment schedules and other anti-TB drugs. Treatment with six or more different medications may be needed, if you’re infected with a drug-resistant form of TB.

New drugs & treatment schedules that are approved by FDA are

Surgical resection of the diseased lung tissue is done in some patients when the lung destruction may be severe.

Loss of appetite, jaundice, nausea or vomiting, bruise formation (bleeding) and vision changes are few side effects of treatment of TB.

People taking TB medications should avoid high dose antibiotics that may harm the liver and must be aware of symptoms such as dark urine, loss of appetite, unexplained nausea or vomiting, jaundice, or yellowing of the skin or if the fever lasts longer than three days.

2) TB Test: If you live in areas where the prevalence of TB is high or if you have a suspicion that you might be affected with TB bacteria, then you have to test for TB. If you test positive, you may be advised by your health care professional to take medications.

3) Protect yourself and your family: Only active TB is highly contagious. In the case of active tuberculosis infection, you can take certain precautions to prevent the spread of TB to your family and friends.

1) How can I prevent myself from getting tuberculosis?

2) What should I do if I think I have been exposed to someone with TB disease?

If you think you have been exposed to someone with TB disease, you should contact your physician and inform them about your exposure and get a TB skin test or TB blood test done.

The TB vaccine is called Bacille Calmette-Guérin (BCG), and it is used in many countries to prevent severe forms of TB in children. However, it is not proved to prevent TB completely in a person who has taken BCG vaccine.