UV Treatment for Vitiligo and Why it Works 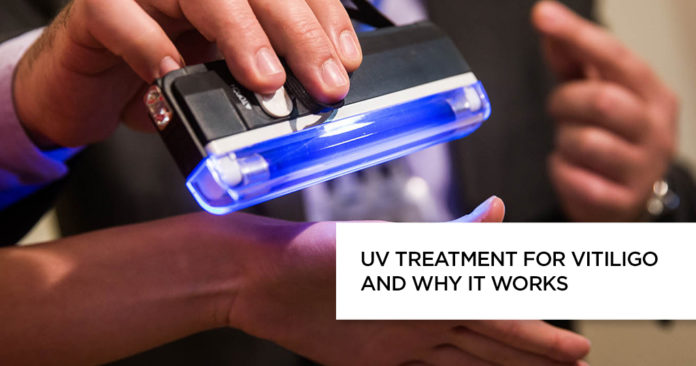 Vitiligo is a skin disease resulting in white patches all over the body. This skin condition can also affect hair and even the internal wall of the mouth. In most cases, these patches grow bigger with time. Though it is not contagious or life-threatening, the loss of pigment from prominent body parts can cause stress among the people affected.

What happens in vitiligo?

Human beings get the characteristic color in the skin and hair due to a pigment called melanin. However, in vitiligo, melanocytes (cells responsible for the formation of melanin) get damaged. It results in loss of color in patches in various organs like hands, feet, and face. Until now, there is no cure for this skin condition. However, regular treatment helps in restoring some color on affected areas.

Depending on the body parts affected, vitiligo can be of following types:

What are the symptoms of vitiligo?

Symptoms of vitiligo include:

When to see a doctor in vitiligo?

It is challenging to determine how vitiligo is going to impact a patient. In most cases, the white patches spread to other organs with time, and sometimes, almost your entire body gets affected. Sometimes, the discoloration can stop progression and, in rare cases, patients gain their original skin tone.

So, it is best to seek the consultation of a dermatologist at the first appearance of vitiligo.

Patients develop vitiligo when their melanocytes stop producing melanin pigment or start dying prematurely. The melanocytes become non-functional causing the loss of normal  skin tone , that turns pale and  white. Though doctors are still unsure about vitiligo’s exact cause, scientists speculate that it can be an autoimmune (immune system start malfunctioning) or hereditary condition. In some cases, triggers like stress, contact with harsh chemicals, and severe sunburn may also play a role in developing this skin disease.

What are the risk factors of vitiligo?

Though vitiligo can occur in individuals of all ages and race, risk factors include

What are the complications of vitiligo?

Vitiligo patients have an increased risk of

Dermatologists usually prescribe medications, light-based therapies, and surgeries for treating this skin disorder. The choice of treatment depends on the amount of skin involved, speed of progression, and patients’ age. Have a look at the various treatment options for vitiligo-

The ultraviolet ray therapy for vitiligo is a popular choice for arresting the depigmentation.

Dermatologists advocate the use of narrowband ultraviolet B (UVB) for active vitiligo patients. Results show that they are more effective in controlling the progression of white patches when administered in combination with corticosteroids or calcineurin inhibitors. There are chances of a few side effects, including burning sensation, redness, and itching. However, these subside within a few hours of treatment.

Patients often require UV treatment for vitiligo twice or thrice a week for satisfactory results. You start experiencing the beneficial effects within one to three months. However, you need to wait for six months or even longer to feel this therapy’s final impact. These days, small portable or handheld devices are also available for implementing narrowband ultraviolet B therapy. Patients can even use these gadgets in the comfort of their house under expert guidance.

There is also an option of combining psoralen with phototherapy for inducing color to light patches. Here doctors use a plant-derived compound- psoralen is the association with ultraviolet A rays. Patients either ingest psoralen through the mouth or apply it to the depigmented surface directly. After this, the therapist exposes the patient to UVA rays. If facilities are not available for UVA, Patient can also expose to natural sunrays in a graded manner. Though this phototherapy has shown satisfactory results, it is challenging for the candidate to undergo the process. It is the reason most skin clinics now resort to narrow-band UVB therapy.

Though it is not possible to reverse the loss of pigmentation in vitiligo completely, doctors often advise a combination of drugs and light therapy to manage the symptoms.

Corticosteroid creams help return some color to depigmented skin. However, it is crucial to start with this treatment at the early stages of the disease for the best results.

These medicines may take months before showing some visible change  to the discoloration and prove their effectiveness.

In rare cases, dermatologists also prescribe calcineurin inhibitor ointments  like tacrolimus  or pimecrolimus  which might be effective for individual with small regions of depigmentation, especially on the face and neck

Recently a new molecule decapeptide or basic fibroblast growth factor is used as application at night followed by sun exposure next morning to promote melanocytes to produce color and spread it to the overlying skin.

If you do not experience noticeable changes in the depigmentation even after undergoing phototherapy or pigmentation, doctors may suggest the following surgical procedures to control vitiligo.

Here the surgeon transfers a tiny pigmented section of the epidermis to the discolored area. It is successful, especially if you have a small localized vitiligo patch. However, there are risks of postoperative infection, scarring, spotty color, and failure in the reappearance of skin pigment.

Here the surgeon generates blisters on a pigmented area of the skin through the suction procedure. After that, he transplants the upper layer of blisters to the depigmented site.

In this procedure, surgeons collect a section of your tissue from the pigmented area and introduce it to a solution. After this, he transplants the tissue on the prepared discolored location. Patients can experience the initiation of the repigmentation procedure within four weeks.

In vitiligo, an Exciter laser with a wavelength of 308nm given twice a week for three to four months gives good results. Availability of the machine is the only constraint

Though vitiligo is non-curable, timely treatment can slow down the progression of the depigmentation. It may even succeed in bringing back some color to white patches. UV treatment is the preferred treatment mode for the treatment of vitiligo.