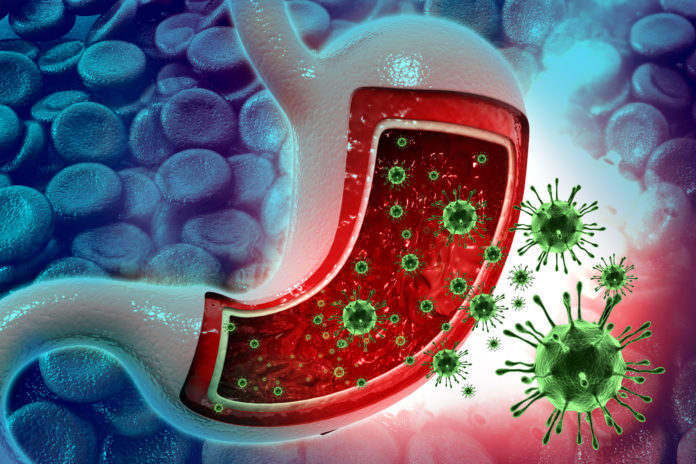 The most common way of contracting viral gastroenteritis is by coming in contact with an infected person or ingesting contaminated food or water. Usually, the disease is easy to recover from without complications.

There is no effective treatment for viral gastroenteritis, so prevention is the key. Prevention includes frequent hand-washing and avoiding contaminated food and water, which is your best defence against the virus.

What are the symptoms of viral gastroenteritis?

Although it is commonly called stomach flu, it is very different from influenza. The flu or influenza affects your respiratory system – your nose, lungs, and throat. On the other hand, viral gastroenteritis attacks your intestines and stomach. This causes symptoms such as:

In viral gastroenteritis, the diarrhea is non-bloody. If blood occurs in your diarrhea, it indicates a probably a bacterial infection like dysentery.

Depending on the cause of your viral gastroenteritis, the symptoms may appear within one to three days and can vary between being mild and severe. Usually, these symptoms resolve in a day or two. However, in some cases, these symptoms can affect a patient for up to 10 days.

Due to similar symptoms, viral gastroenteritis might easily be confused with different infections caused by bacteria, such as Clostridium, Salmonella, and Shigella, or a parasitic infection caused by Giardia.

Some disorders could cause symptoms similar to stomach flu, such as:

What are the causes of viral gastroenteritis?

You will most likely develop viral gastroenteritis if you consume contaminated food or water or share utensils, towels, or food with someone infected.

Several types of viruses can cause viral gastroenteritis, such as

Some varieties of shellfish, especially raw or undercooked oysters, can also make you sick.  While contaminated drinking water is a cause of viral diarrhea, the virus is passed through the fecal-oral route in many cases. That is, someone infected with the virus handles the food you eat without washing his or her hands after using the toilet.

Who is at risk of getting stomach flu?

Viral gastroenteritis affects people of all ages, races, and sex across the world.

The people predisposed to viral gastroenteritis may include:

Wherever groups of people live in close quarters and confined spaces is an opportunity for the infection to spread.

When should you see your doctor?

If you are an adult, consult a doctor if:

Contact your baby’s doctor if they show the following symptoms:

What are the treatment options for viral gastroenteritis?

The main focus of treatment is directed at preventing dehydration by drinking plenty of fluids. In severe cases, hospitalization and intravenous fluid injections are necessary.

To combat dehydration, over-the-counter Oral Rehydration Solution (ORS) can be extremely helpful in mild cases. They will be easy on the stomach and contain a fixed formula essential to replenish the lost fluids and electrolytes.

There is often no specific medical treatment for viral gastroenteritis. Antibiotics are not effective against viruses, and their overuse can contribute to the development of antibiotic-resistant strains of bacteria.

What are the preventive measures to avoid stomach flu?

The best way to prevent viral gastroenteritis is to follow these precautions:

Precautions to be taken while travelling:

Viral gastroenteritis is a fairly common complication that affects almost everyone around the world. It is rarely fatal. Hence, it is not a reason to panic or worry. Look out for signs and symptoms, keep yourself and your child hydrated, and follow the necessary precautions. If the symptoms does not subside, contact your doctor at the earliest.

Q1. What are the home remedies for stomach flu?

Try applying a low-temperature heating pad on your abdomen or stomach to help with the cramps. Also, avoid eating oily, spicy foods. Try to eat foods that soothe an upset stomach, such as rice, ginger, mint, or yogurt.