Ways to Know Your Child is Suffering from Bronchiolitis 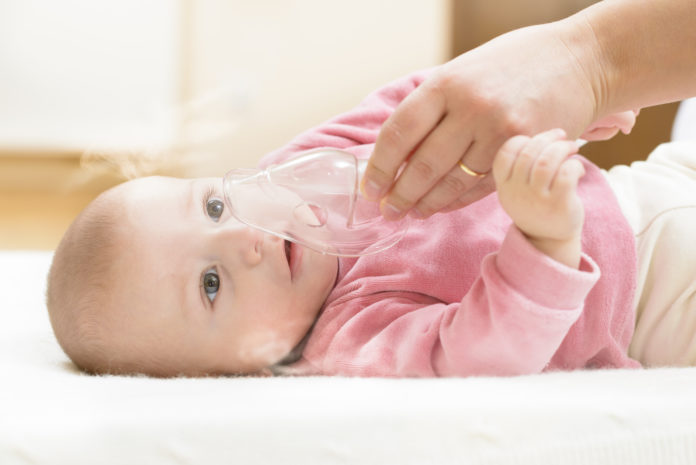 Bronchiolitis is a common lung infection in infants and young children. The disease can cause difficulty in breathing, coughing, and wheezing. Most cases of bronchiolitis are treatable at home. In severe cases, you may need to hospitalize the child. Bronchiolitis is also one of the most common reasons for admissions of infants and children to a hospital.

Bronchiolitis is an infection that causes congestion and inflammation in the bronchioles (small airways) of the lungs. It is most common in infants and young children. However, adults can get it too, though such cases are rare and often related to other infections and injuries.

In most cases, a virus causes bronchiolitis. The infection peaks during the winter months. The initial symptoms of bronchiolitis start similar to those of a common cold, but may soon progress to wheezing, coughing, and difficulty in breathing.

What are the Symptoms of Bronchiolitis?

The initial symptoms look a lot like that of a common cold. Your child may present with the following symptoms:

These symptoms may get worse with time. Your child may show severe symptoms such as:

During bronchiolitis, infants may also experience an ear infection, known as otitis media.

If you notice your child presenting with these symptoms, immediately seek medical assistance.

When Should You Visit the Doctor?

Apart from the symptoms mentioned above, the following signs and symptoms are a cause for concern:

A virus causes bronchiolitis. The infection causes the bronchioles to swell and become inflamed. The resulting mucus deposits in the airway restrict free flow of air in and out of the lungs.

The majority of bronchiolitis cases are caused by the respiratory syncytial virus (RSV), which typically has an outbreak in winter. This virus is common, affecting almost every child below the age of two years. The infection does not result in lasting immunity, which makes reinfection a possibility.

In some cases, bronchiolitis is caused by other viruses that cause the common cold or the flu.

These viruses that cause bronchiolitis can quickly spread. They can be transmitted through the air when a sick person talks, sneezes, or coughs. The infection can be contracted by touching shared objects (doorknobs, tables, toys, windows, etc.) and then touching the face, eyes, or nose.

What Are the Risk Factors Associated with Bronchiolitis?

In most cases, children below the age of two will develop bronchiolitis. Infants below the age of three months are at an increased risk of developing the infection. This is because the immune system and lungs of infants are underdeveloped.

Other risk factors include:

What Complications Can Arise if Bronchiolitis is Left Untreated?

In severe cases of bronchiolitis, the following complications can arise:

If these complications occur, you may need to immediately admit your child to the hospital. In severe cases of respiratory failure, the doctor may even insert a tube down the windpipe (trachea) to aid the child with breathing.

If your child was born prematurely, has a depressed immune system, or presents with a lung or heart infection, keep an eye for the early signs of bronchiolitis. The condition may quickly worsen.

Can Bronchiolitis be Prevented?

Bronchiolitis is a contagious viral infection. It can be transmitted from one person to another the same way a common cold or the flu is — through droplets in the air.

It is hard to stop a viral infection, but you can help minimize the risk of your child getting the infection by:

If your child is under the age of two years, you can get her/him a palivizumab shot to help prevent the risk of developing the RSV infection.

How is Bronchiolitis Diagnosed?

A doctor will diagnose bronchiolitis by observing your child and listening to her/his breath sounds with a stethoscope. In severe cases of bronchiolitis, the doctor may order laboratory tests and x-rays. These tests may also be needed if the symptoms worsen or if another infection or disease is suspected.

How is Bronchiolitis Treated?

There is no cure for bronchiolitis, yet. The infection lasts for about two to three weeks. In most cases, one can treat children at home. It is essential to keep looking for signs and symptoms of breathing difficulty, such as not being able to cry or speak because of strained breathing, struggling for each breath, and making sounds with each breath.

Along with bronchiolitis, other infections such as an ear infection or pneumonia may occur. The doctor may prescribe antibiotics for these infections. He/she may also suggest home remedies to help speed up the recovery process, such as:

Bronchiolitis is a viral infection that affects almost every child aged two years or below. Typically, most children start to feel better and if hospitalized can go home in two to five days. If the bronchiolitis condition worsens, then your child may need to stay in the hospital for a little longer. A machine may be required to help your child breathe.

1. What is the difference between bronchiolitis and bronchitis?

2. How long does the wheezing last?

In most cases, the symptoms of sudden wheezing and rapid breathing last for about two to three days. In severe cases, they may take longer to disappear. Mild wheezing sounds may take about a week to get resolved.

3. Which day of the infection period does bronchiolitis peak?

The infection usually peaks around days 3-5 with the resolution of wheezing symptoms. The cough may continue for up to four days.