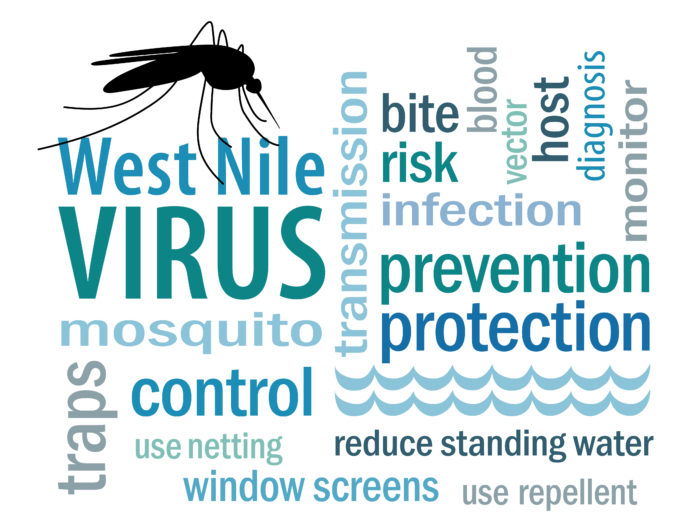 West Nile Virus (WNV) is a zoonotic disease that affects animals, but can also affect humans. A member of the flavivirus genus, WNV belongs to the Japanese encephalitis antigenic complex of the family Flaviviridae.

Birds are the instinctive host of the West Nile virus. Mosquitos develop the virus by biting the infected birds. Most human cases of WNV are by mosquito bites.

Other than humans, this virus can affect horses and many other species of birds. Generally, West Nile virus spreads to humans and animals from bites of infected mosquitoes. Mosquitoes get infected after biting infected birds and carry this virus.

In 1951 the first human being was affected by West Nile Virus (WNV)  in Israel. Commonly found in West Asia, the Middle East, Europe, Africa and North America, WNV can cause neurological disease and even death in affected people. It is maintained in nature in a cycle involving transmission between mosquitoes and birds. Humans, horses as well as other mammals can be infected.

People of old age and people with a chronic disease like diabetes or cancer have a higher risk from the disease. However, the chances of severe illness are less. People facing severe symptoms recover completely.

Eighty percent of people infected do not feel any symptoms.

Out of the rest of the 20%, few of the infected people feel mild symptoms. These symptoms are almost the same as any other  viral fever. Mild symptoms of West Nile virus include:

It is projected that about 1 in 150 persons infected with WNV may develop a more severe form of this disease. While severe illness can occur in people of any age, those over the 50 years of age and some immunocompromised individuals (Eg. transplant patients) are at the greater risk for getting severely sick when infected with WNV.

Those who have a weak immune system due to any reason do have more risk of getting severe symptoms of WNV.

Travelers visiting endemic areas are at risk of catching the virus, along with people over 60 with a weakened immune system. People with other diseases like cancer, high blood pressure, or diabetes are also at higher risk.

Mostly there is no need for a consultation. Mild symptoms will most likely go away by themselves. If you feel any of the severe symptoms mentioned above, then make an appointment with your physician right away.

West Nile virus can be detected using numerious different tests, which may include:

IgM can be diagnosed in almost all CSF (cerebrospinal fluid) and serum specimens taken from the WNV infected persons at the time of their clinical presentation. Serum IgM antibody can persist for over an year.

If the doctor suspects any neurological damage due to the disease, he/she may order an MRI or EEG to measure the brain’s activity and find out if there is any inflammation.

The maximum chance of catching the West Nile virus is by a mosquito bite.

Mosquitos have trouble surviving in winters, so these precautions should be taken more seriously during the summer.

Most cases of the West Nile virus do not require any treatment. Severe cases may require hospitalization.

There is no cure or vaccine specifically for humans as of now. If you consult a doctor, he/she might provide medications for  specific symptoms like pain killers for body aches and medication to reduce fever.

There is no vaccine for the West Nile virus right now, but it can be prevented .

The odds of the diseases getting serious are very less, and you might recover very quickly. If the mild symptoms are making you uncomfortable, then a few medications can be very helpful.

If the symptoms are getting worse, seeing a  a doctor as soon as possible and taking the right step might promise a complete recovery and no post disease symptoms.

If you are feeling any of the severe symptoms mentioned above, see a doctor now.

Can you die from the West Nile virus?

Less than 1% of the people affected by the virus face severe symptoms. Chances of death through WNV are very slim, but it is possible.. Also, age plays a role as more severe cases are seen in people over 60.

No, the West Nile virus cannot be transmitted from human to human. The disease originates from birds and is transferred to humans through mosquitos.

Can pet dogs and cats catch the virus?

Dogs and cats can be affected by the virus. However, they cannot transmit it to people. There are very few chances of animals not recovering from the virus. Most of them, if in a healthy condition, recover very quickly.